I have been digging deep into the Bazooka back story of late and finding all sorts of interesting things.  As many regular readers here know, there was a wealth of premiums offered over the years by Topps and Bazooka comics were the source of many of these trinkets and gadgets.  I thought a look at some of the more offbeat Bazooka Joe comics and premium offers would be a fun diversion today. 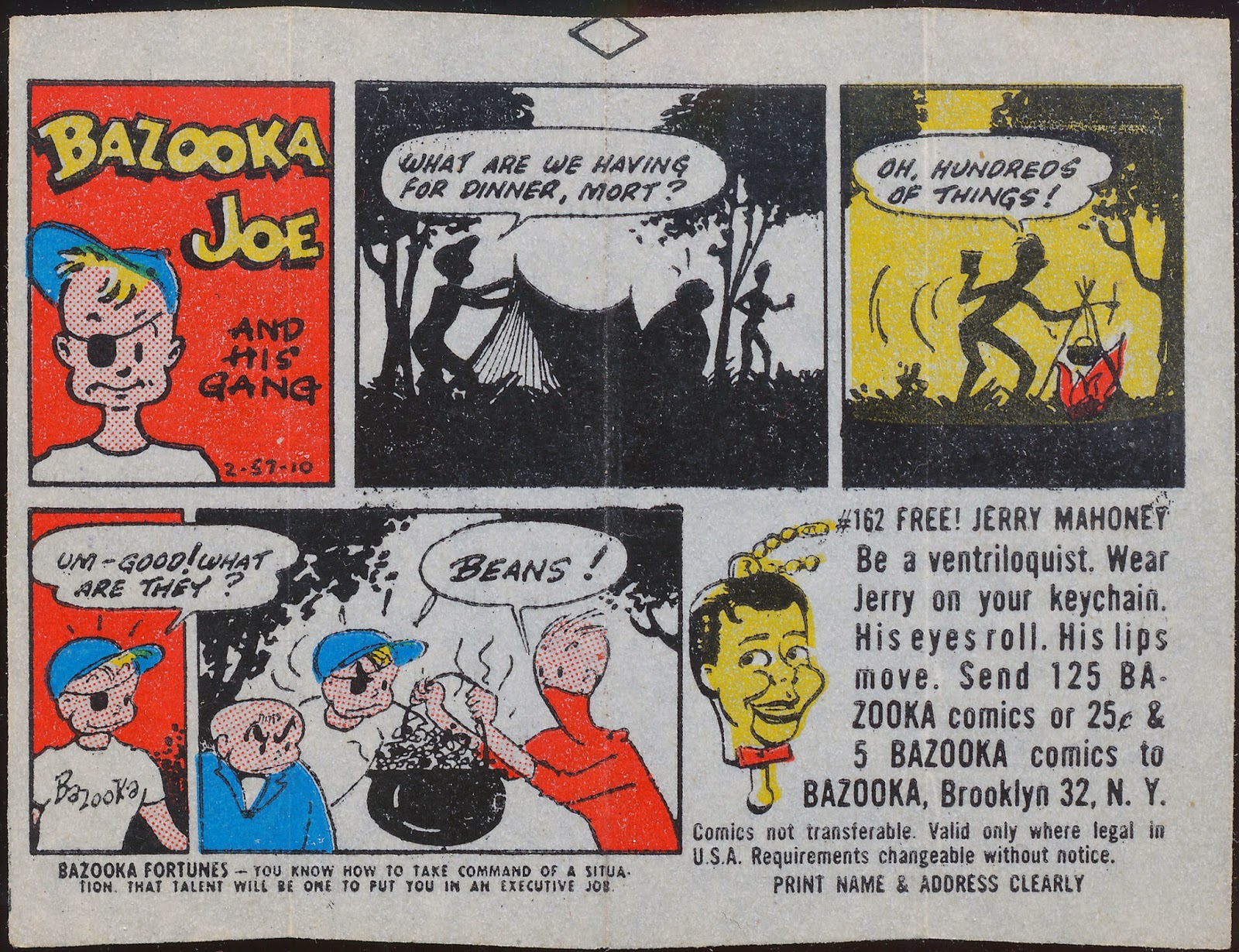 First up is a 1957 Bazooka Joe one cent comic exhibiting signs of the high speed cutting process used by Topps at the time.  I believe the comics were folded (the diamond marks the spot) and then cut, which explains the Rorschach like pattern.  I especially like the black-and-white first panel and the entire comic seems a bit noir-ish.  Geez, that Jerry Mahoney keychain charm is frightening! 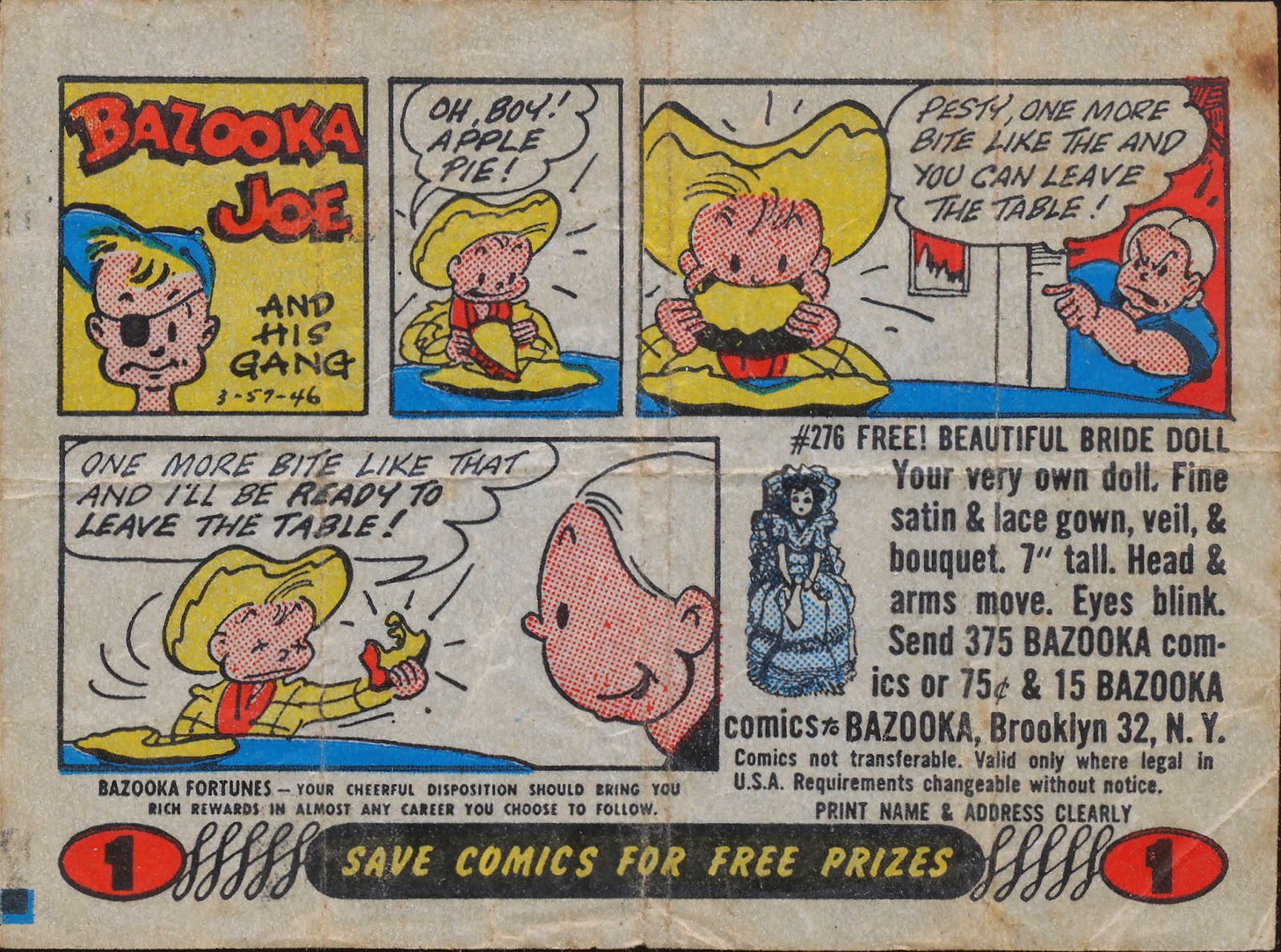 Another 1957 comic with something for the ladies.  You don't often see premiums (or much else) from Topps, so this bride doll is a head turner.  It's alsoan expensive premium by the standards of the times. 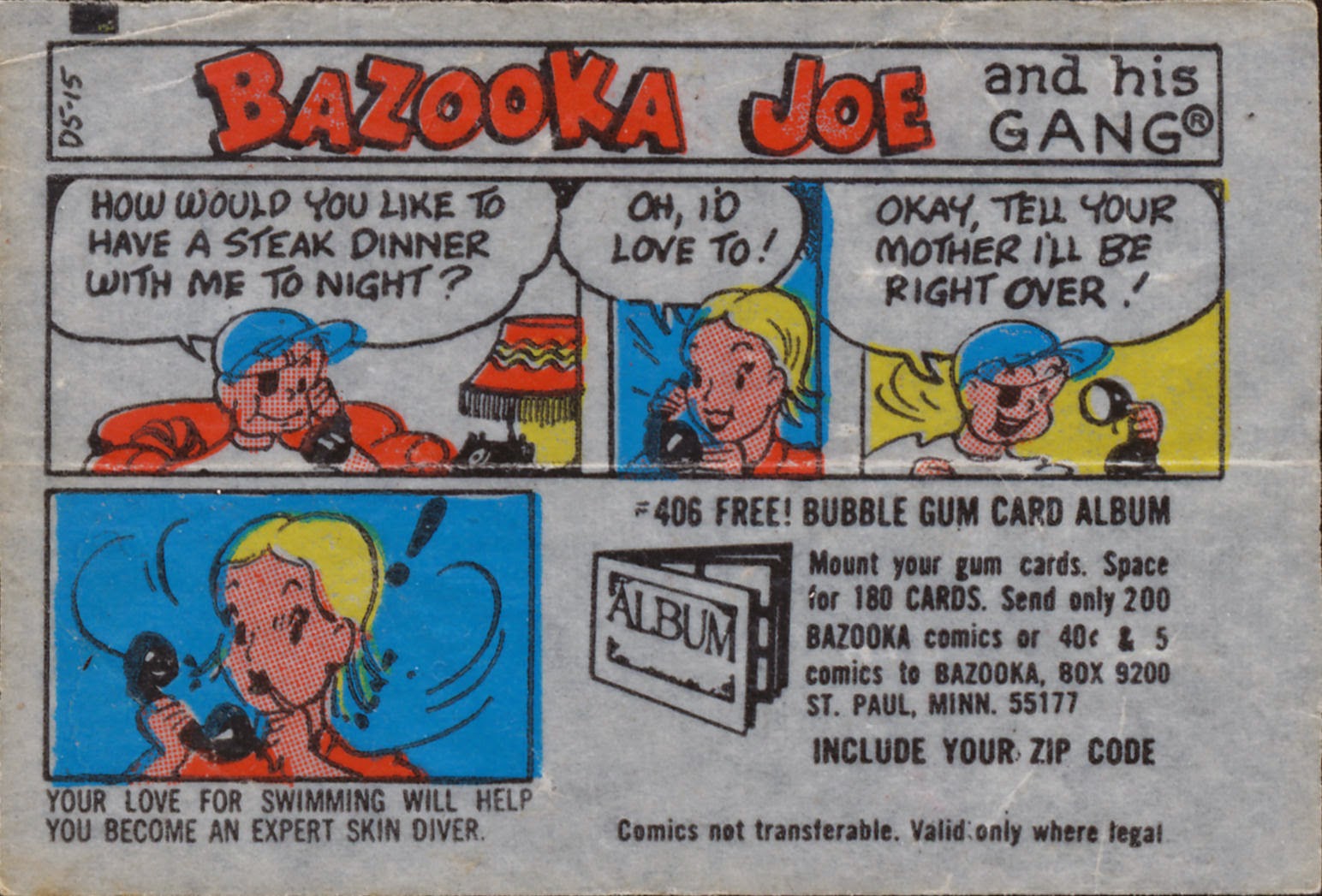 This 1965-ish comic possibly features the Topps Gum Card Album discussed here many yonks ago. I don't know why the one above only holds 180 cards when the most common one can house 208. There were also some albums produced in 1965 and 1966 by third parties designed to hold Topps baseball cards but I have no idea what this premium looks like as the graphics are less than helpful!

This "roll" comic (it came with the five cent roll of Bazooka that looked a little like a cigar with score marks) does not have a code that speaks the date to me but the premium represents overstock of the only two issues of Topps Fan Magazines from 1965. A $1.00 value on distributor returns?  Hah!

Sometimes Topps would sneak in something that wasn't a comic.  Here is an insert for the famous Exploding Battleship: 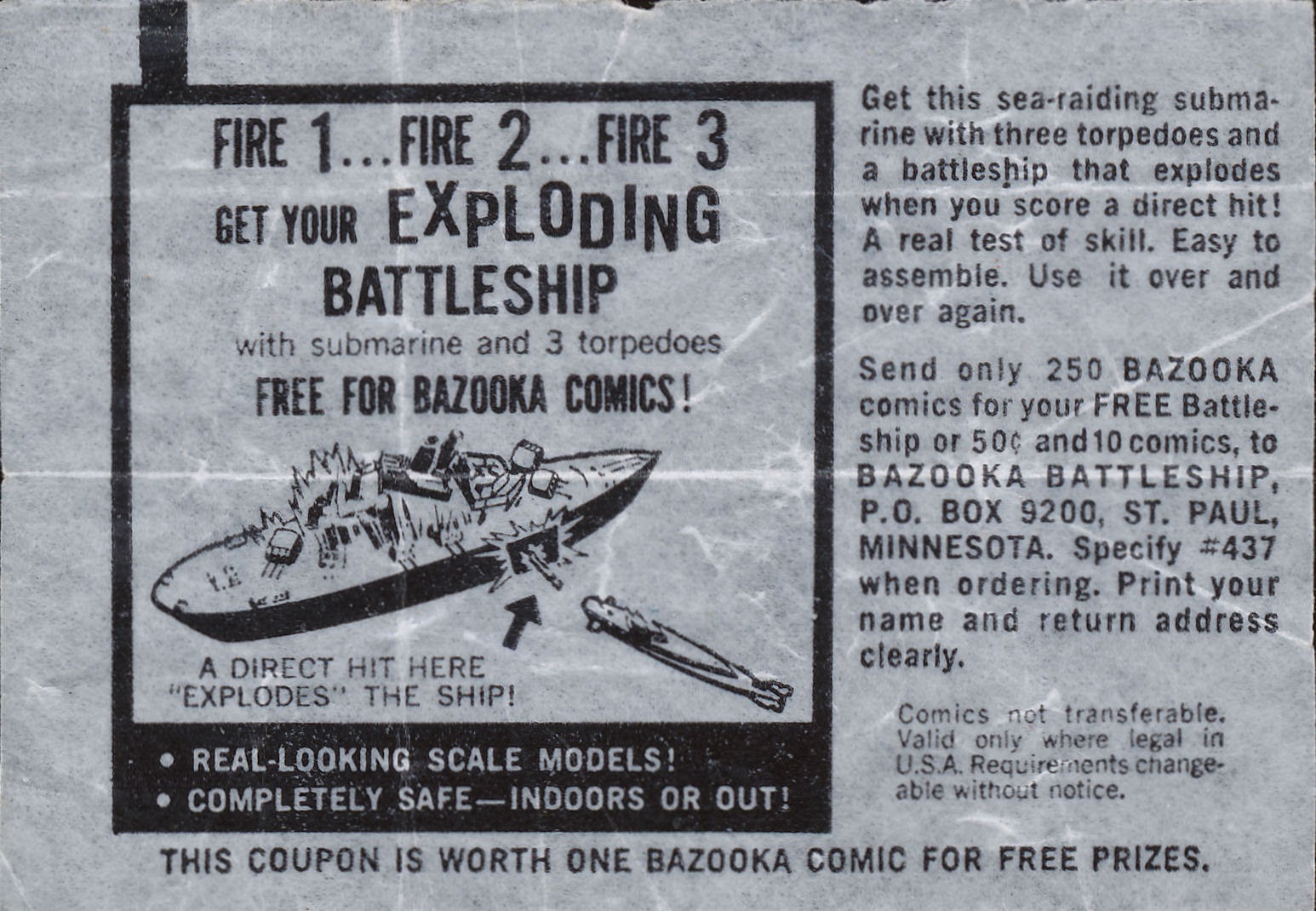 I guess they had a lot of those in the ole warehouse and I suspect they may have tried to move them all out before the big move to Duryea, PA in early 1966.  Other premiums are featured on these as well. Topps had been recycling series of Bazooka Joe's for years, peppering in what stock they had remaining of the Wesley Morse originals but they were drying up by the end of the 70's (Morse had died in 1963).  It would be another decade before they commissioned a redesign but Topps became expert at repurposing the exisiting artwork and stretching out the series as this 1972 one-panel shows: 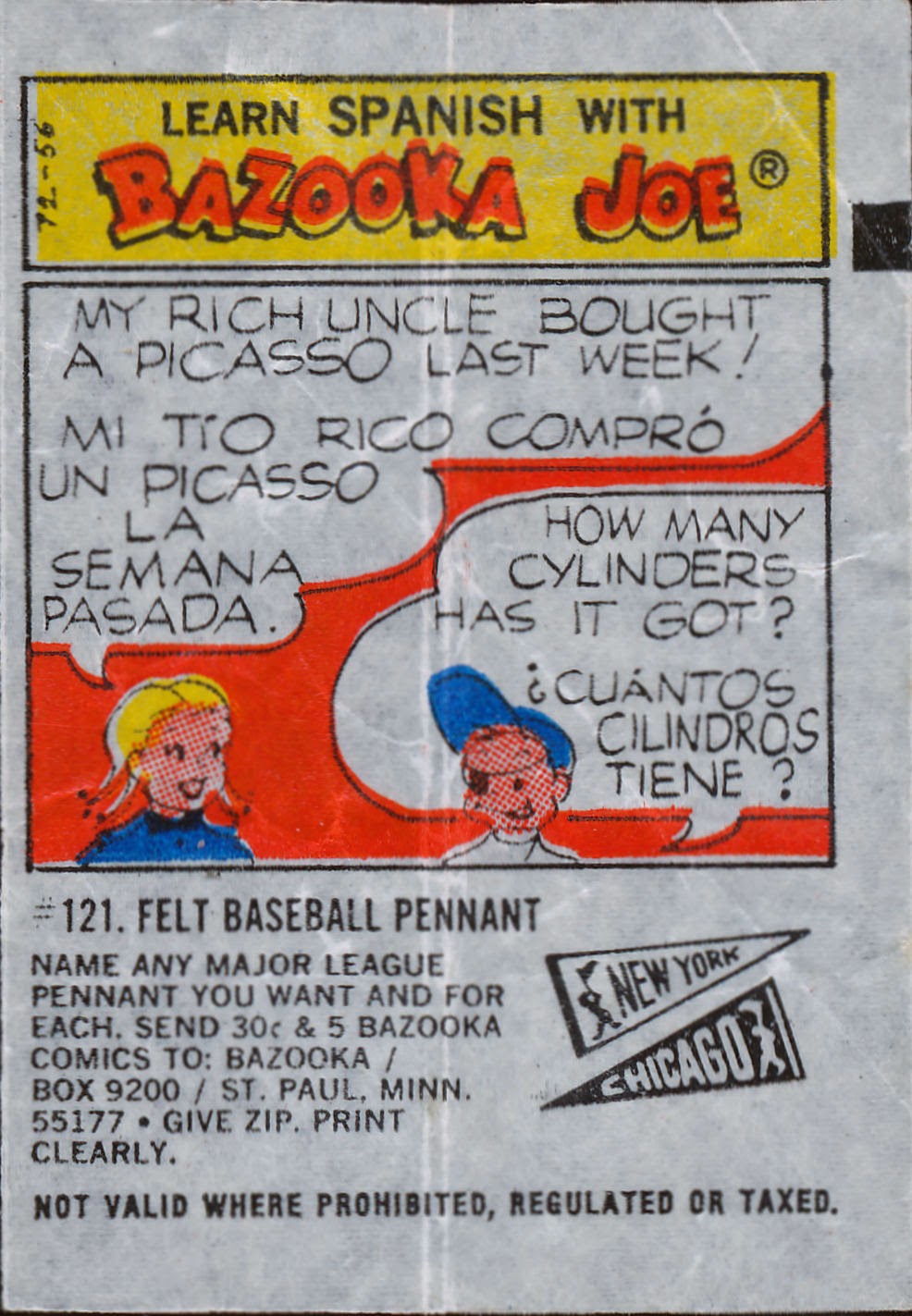 Those felt baseball pennants go back to the origins of Bazooka, although these are probably the latest in the redesigned series that commenced in 1958-59.  Still #121 was an ancient premium number by 1972 as the most common ones seen were from the "400 series".

I think the below comic dates to around 1980 and it's a hybrid of Morse's and another artist's work: 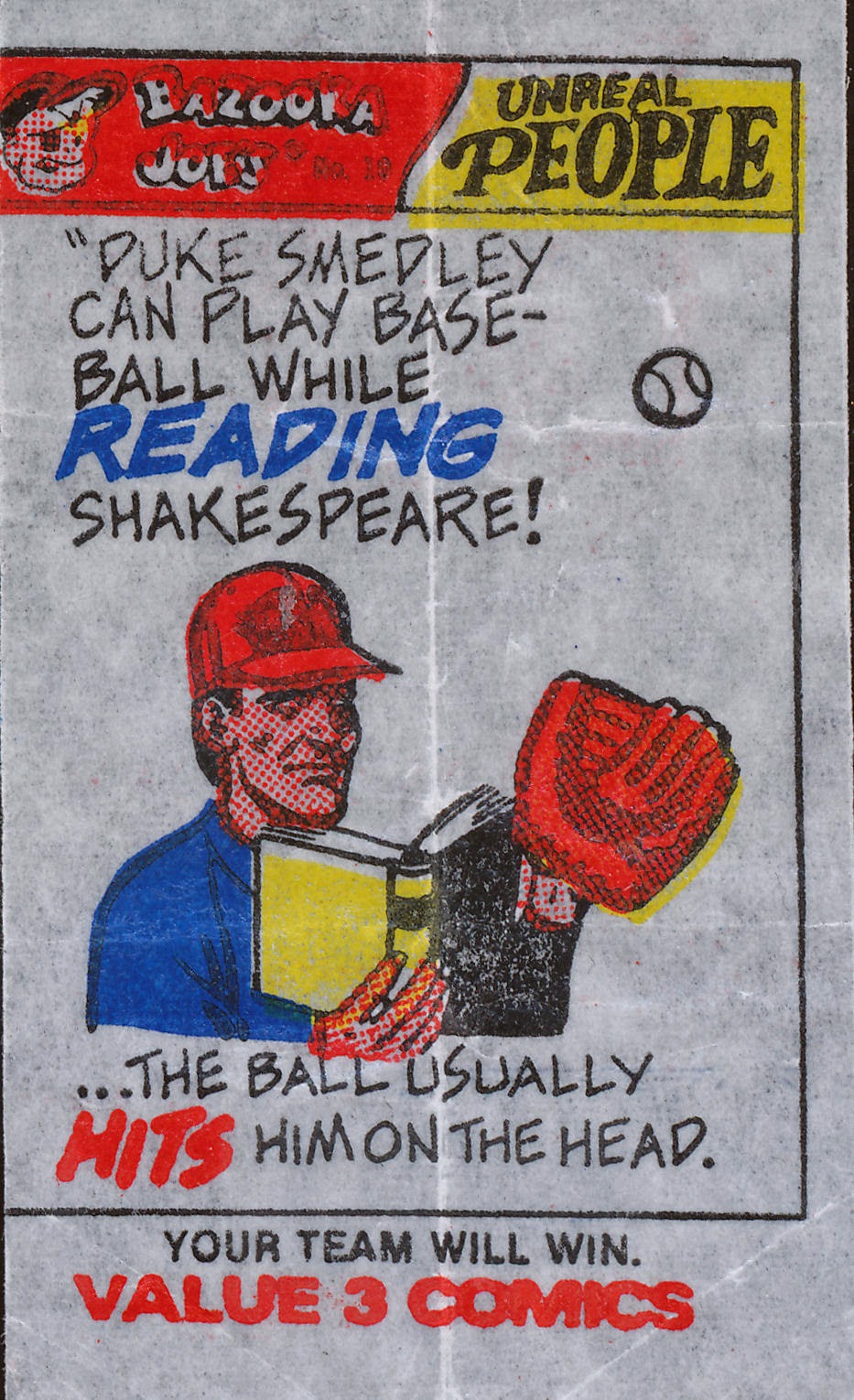 The Little Creeps were, accoring to this site, the forerunners of the Garbage Pail Kids: 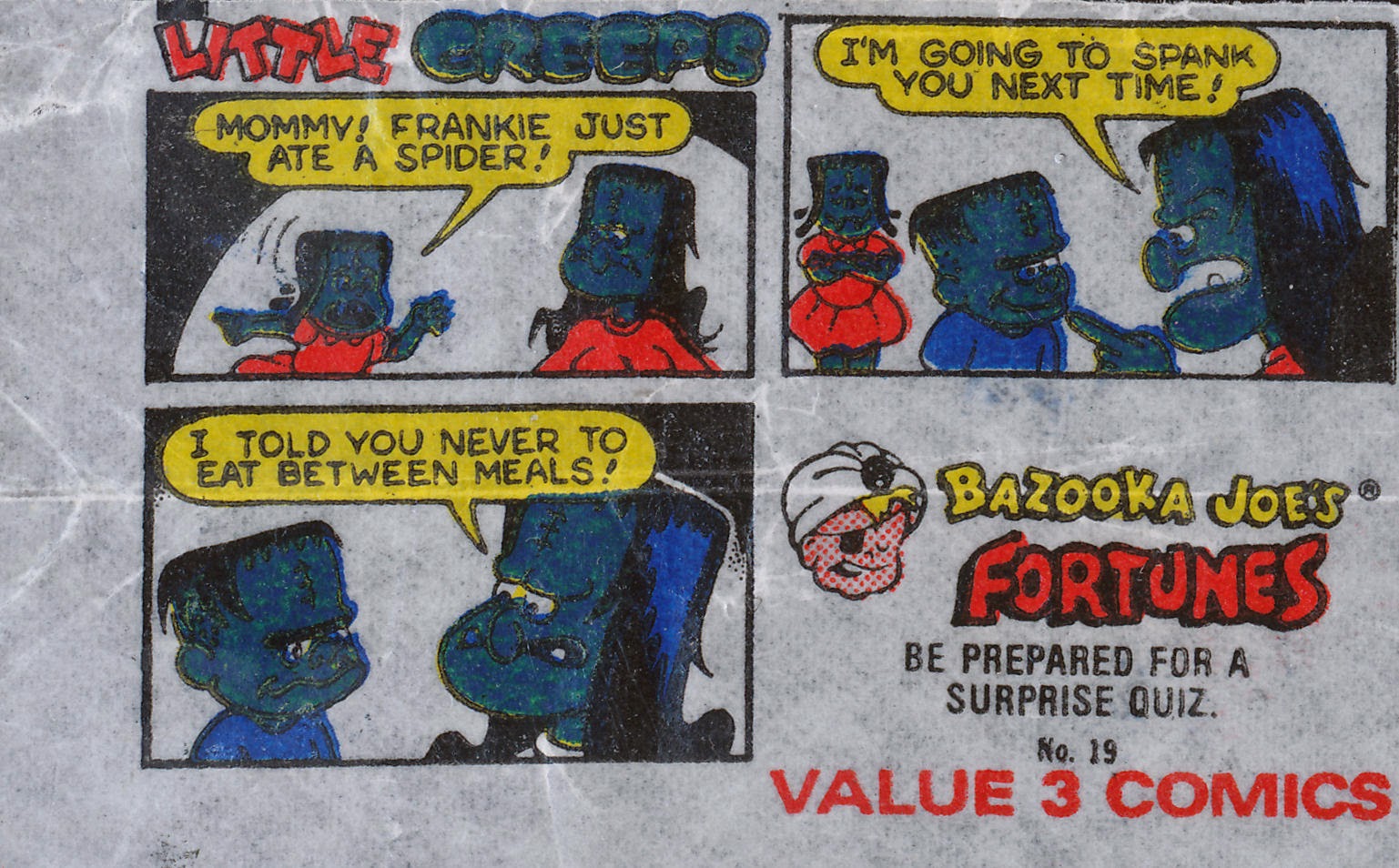 Things were getting pretty thin in the idea department by 1983, so Topps had Howard Cruse develop a whole new look for Bazooka Joe and His Gang: 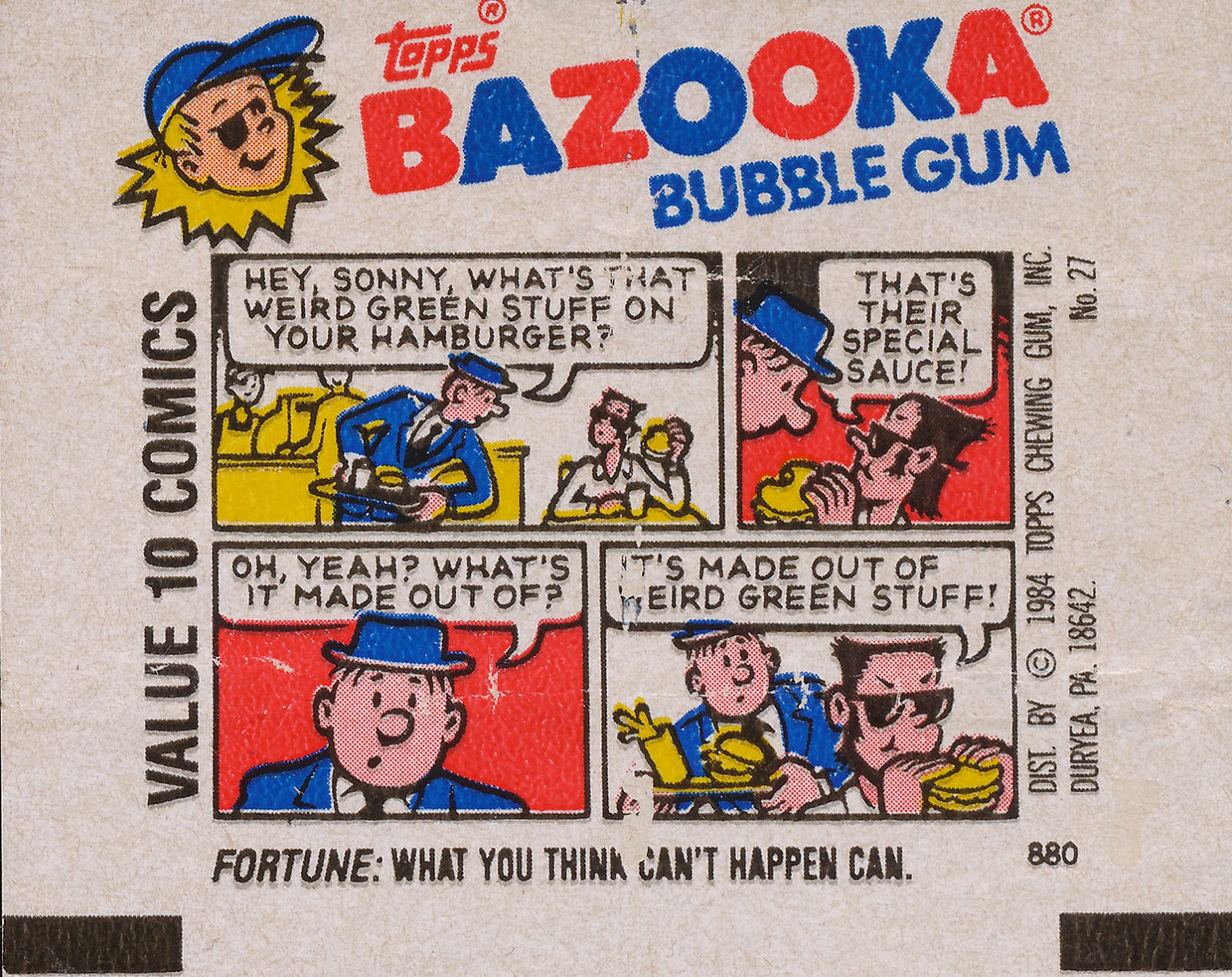 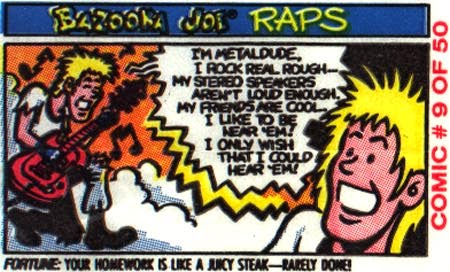 And since I have nowhere else appropriate to show this at the moment, check out this point-of-sale decal for Bazooka: 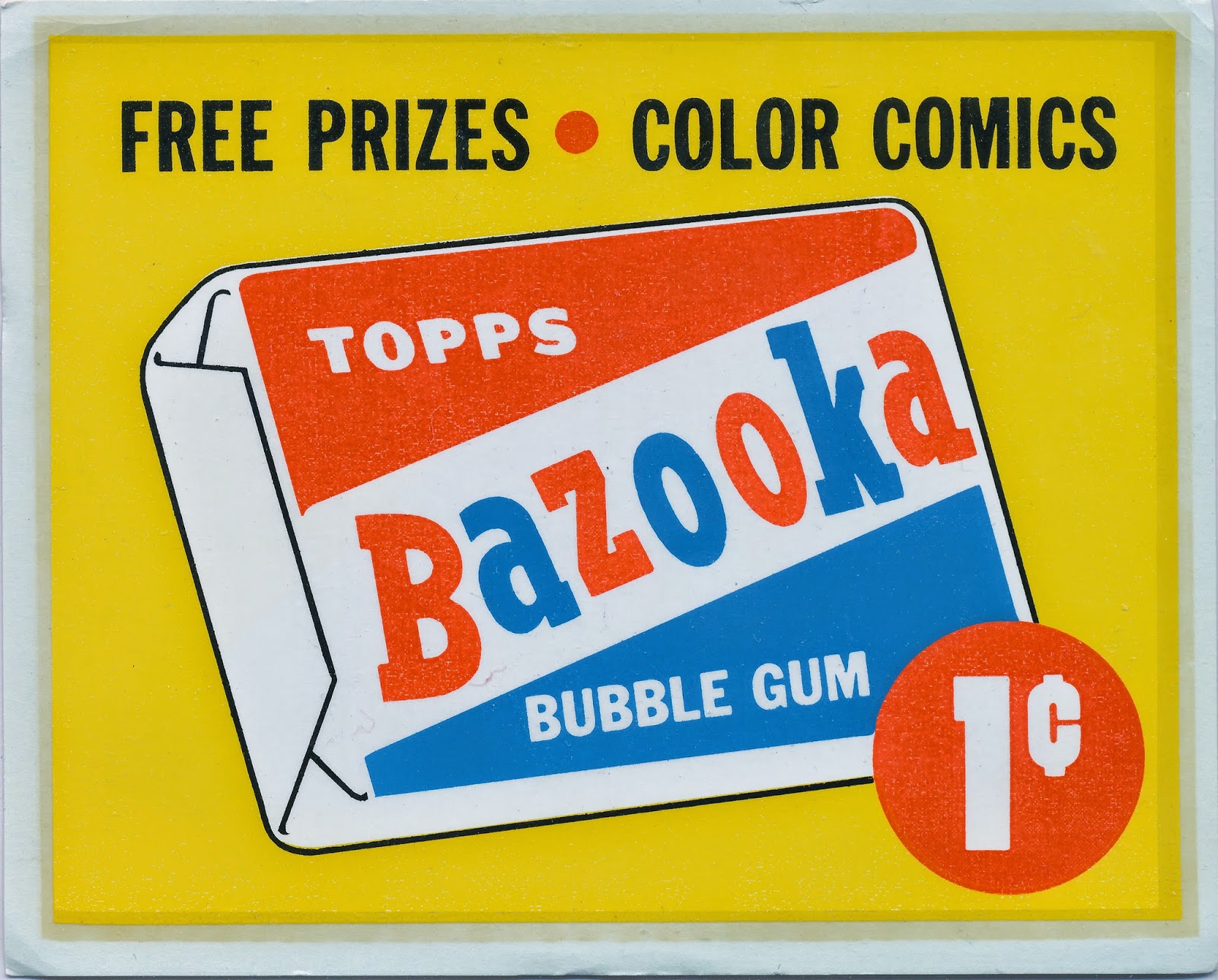