You have to give Topps an A for Effort in their postwar business plan.  After perfecting Bazooka in 1947, a flurry of promotions, premiums and advertising followed in the wake of its retail debut that summer. Very early on Topps hit upon the premium as a way to boost sales and visibility of the brand. Premium offers didn't really appear on the comics until the early 1950's and Topps used small brochures to advertise their earliest premiums.

The first Bazooka packs were five cent rolls; the one cent tabs did not appear until 1949 and while I have seen separate inserts advertising premiums from the penny packs, I can't recall any from the nickel versions. They did have some small ads for the catalogs alongside some of their their first comic strip efforts, like so: 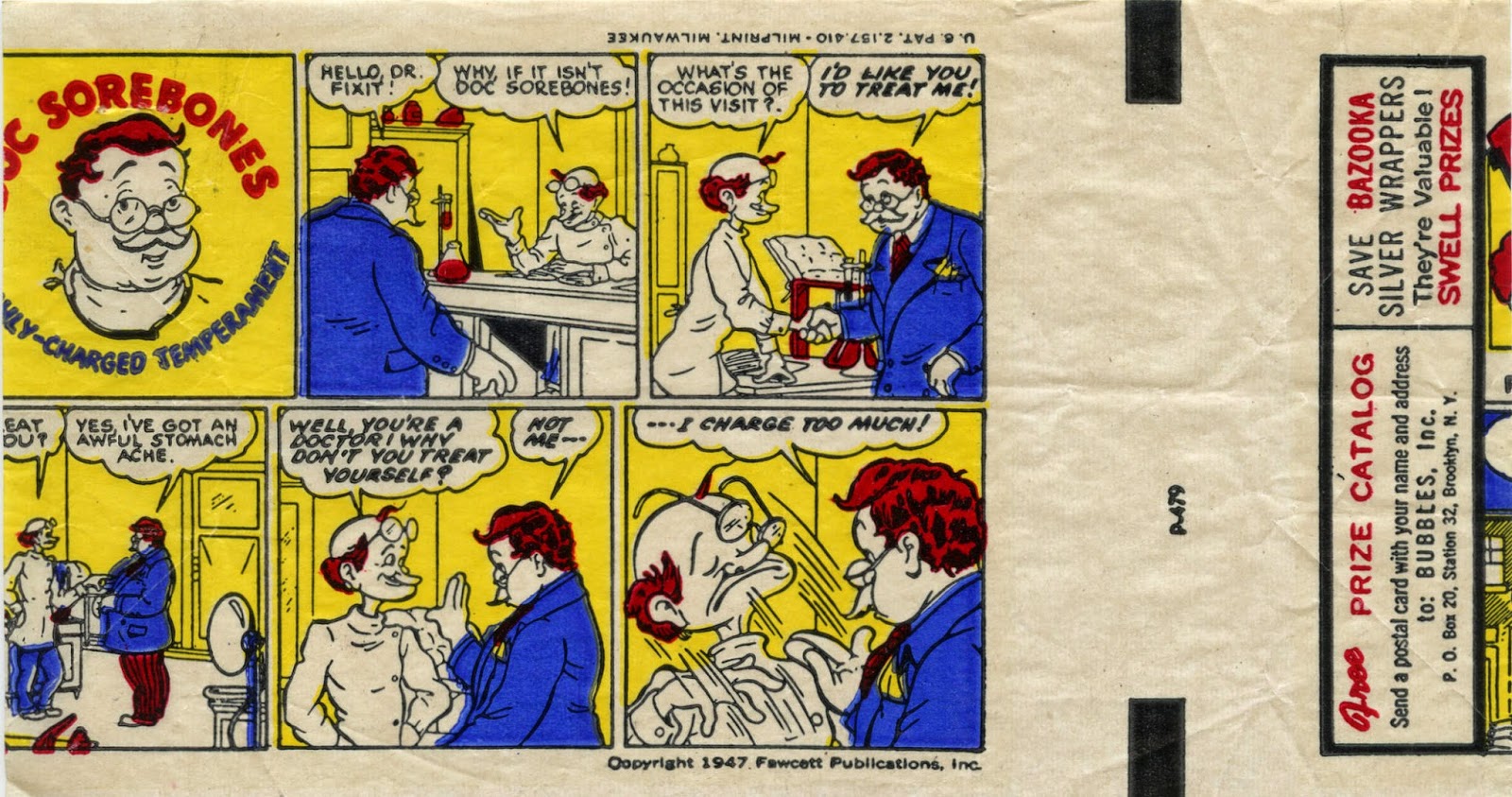 Topps also had many ads in comic books and magazines such as Boys' Life for a variety of cards and premiums and when they mailed them out a brochure tagged along. This trade ad shows the strategy: 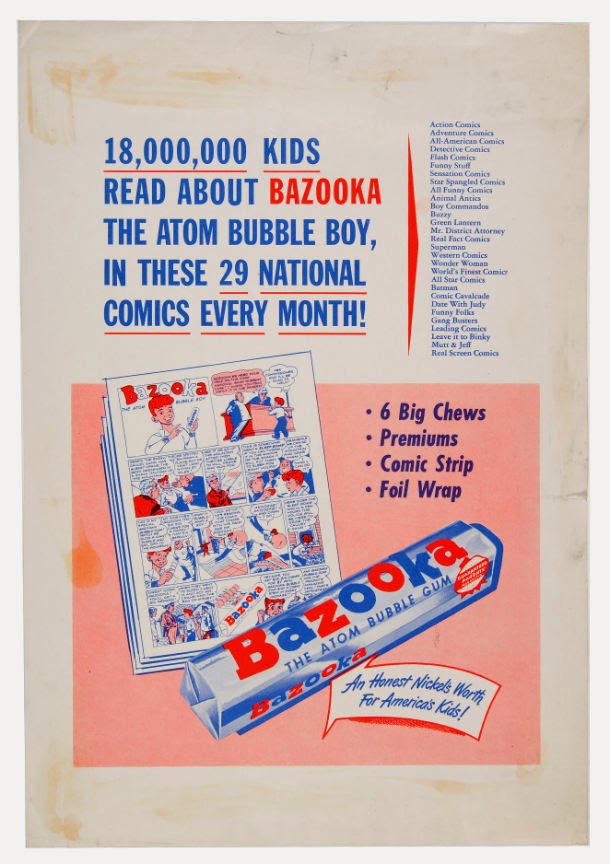 he first brochure was a thing of simplistic beauty but you had to use your imagination to picture the premiums: 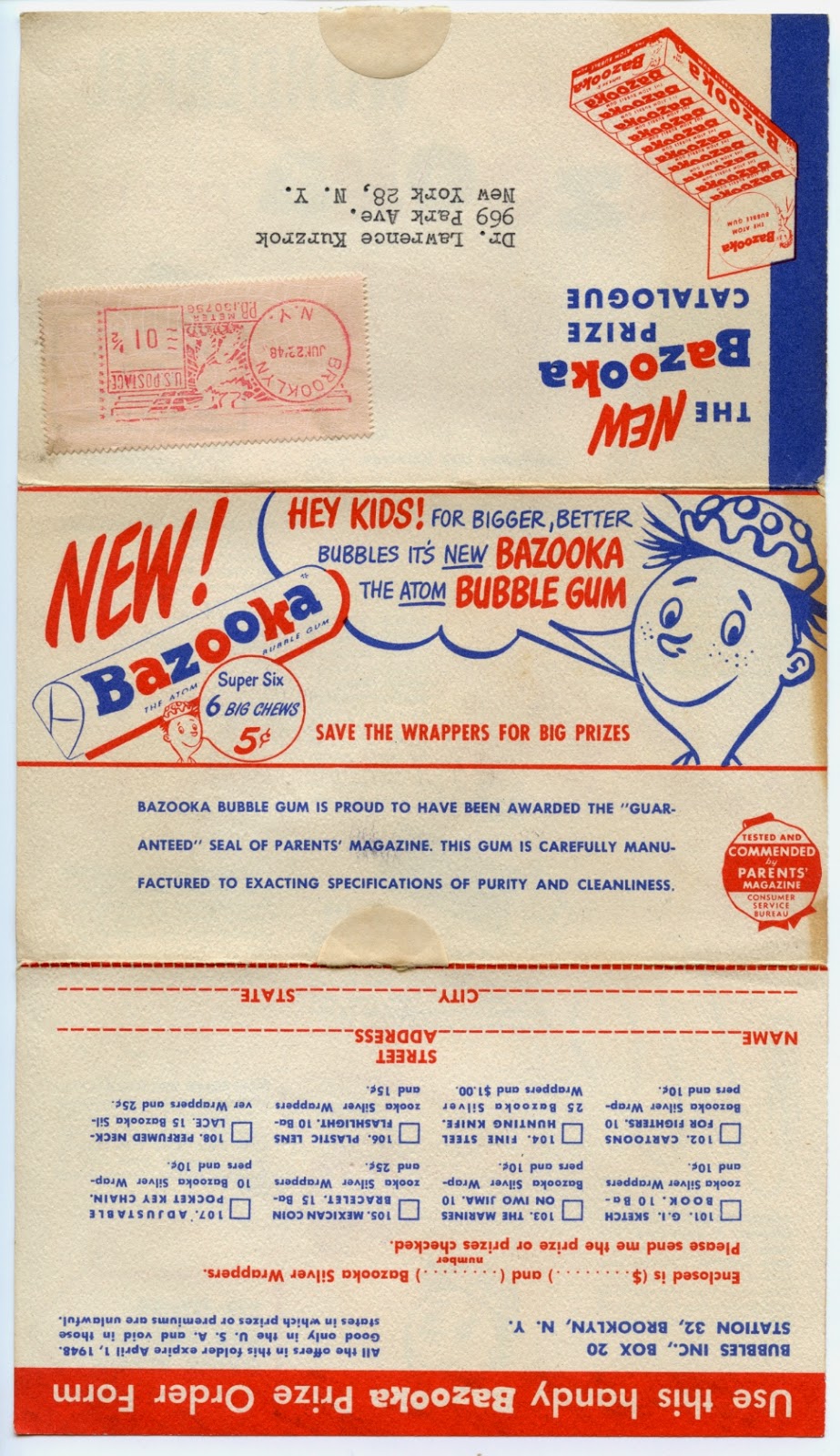 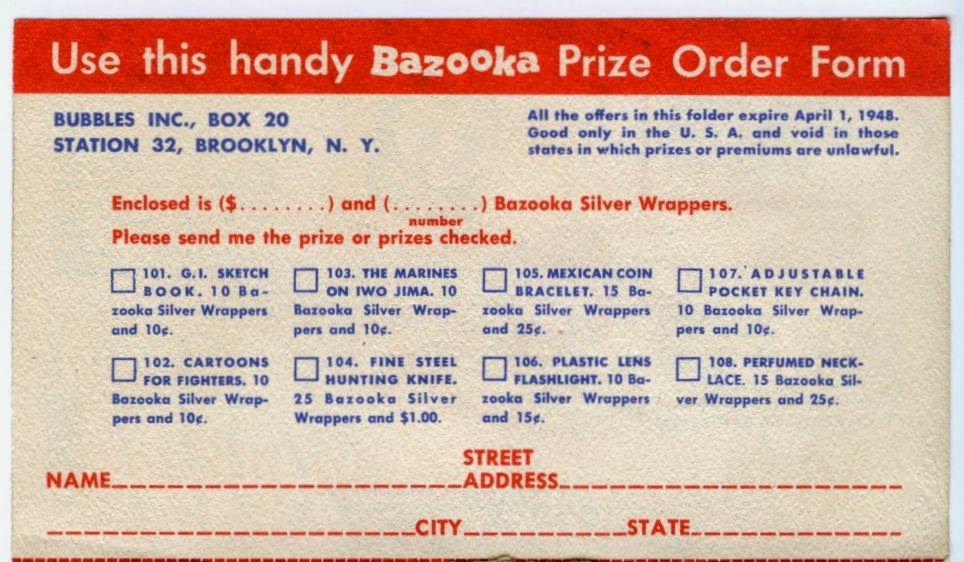 A strong military connection was a hallmark of Topps cards and premiums until the great Freedom's War debacle of 1951 when Topps temporarily derailed their association with the military after groups of mothers and veterans protested that they were glorifying combat.  There were always one or two items for the girls as well.

Their first multi-premium catalog was a huge success and they had to send out mailers to people when the first run ran out: 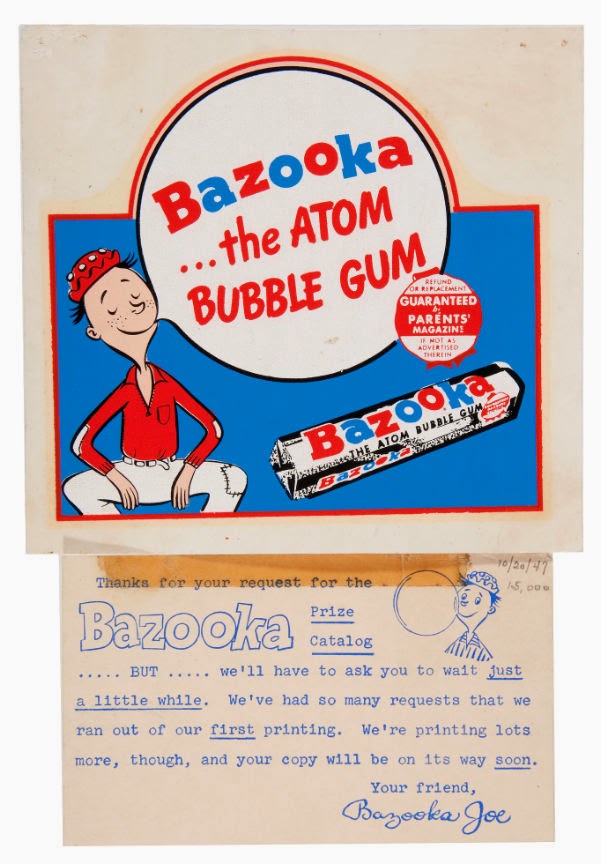 The window display is unrelated to the postcard, it just came along for the ride on the scan.  As noted on this file copy kept by Woody Gelman, 15,000 postcards had to be printed up to meet demand. The original Bazooka Joe was 180 degrees removed from the later, familiar character but this early iteration is from October of '47 or earlier. Some premium numbering would be changed in the years to come but the sequence locked in pretty early in the 50's.

By 1949 Topps was hoping a connection with college football would be the ticket to glory as they marketed Varsity gum. As a tie in, they started pushing letters and numbers to let the kids make up their own football jerseys (see #111 in the middle; the other inserts date a little bit later): 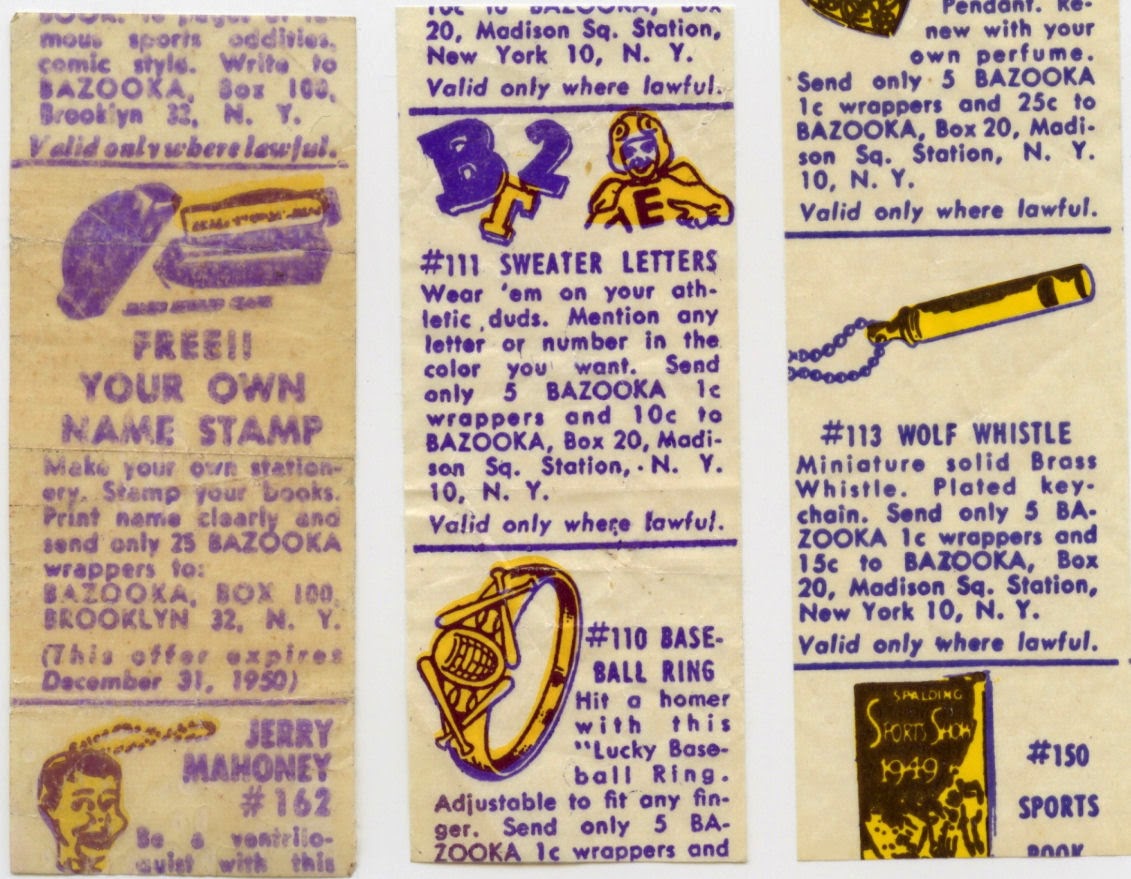 The biggest promotion though, possibly their biggest ever, was for college pennants (or banners, in their parlance).  Check out the bottom of this ad: 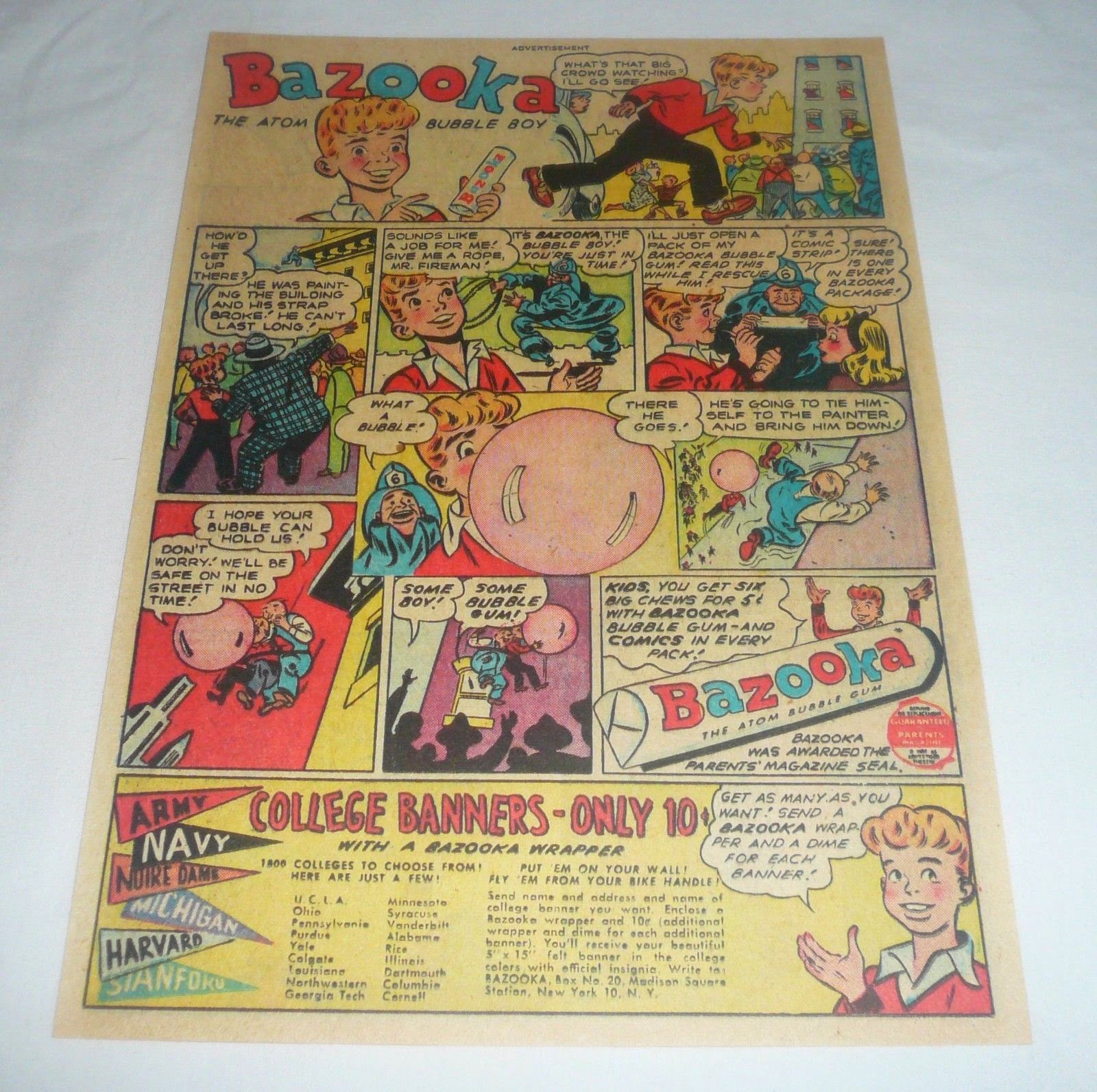 If I'm not mistaken that ad states 1800 colleges were available on a 5" x 15" pennant.  However, I think that may have been an exaggeration as this wonderful late 1940's brochure shows: 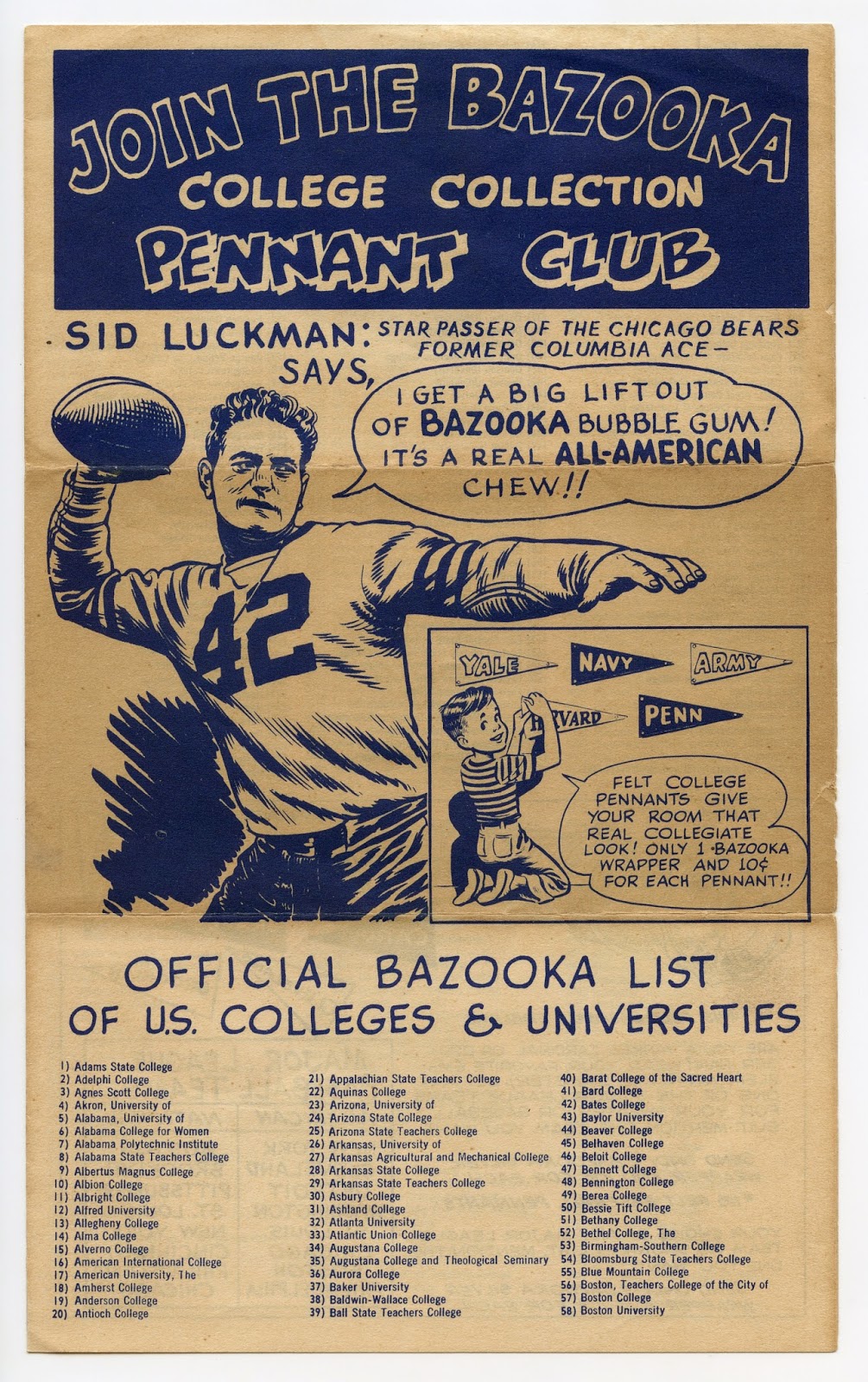 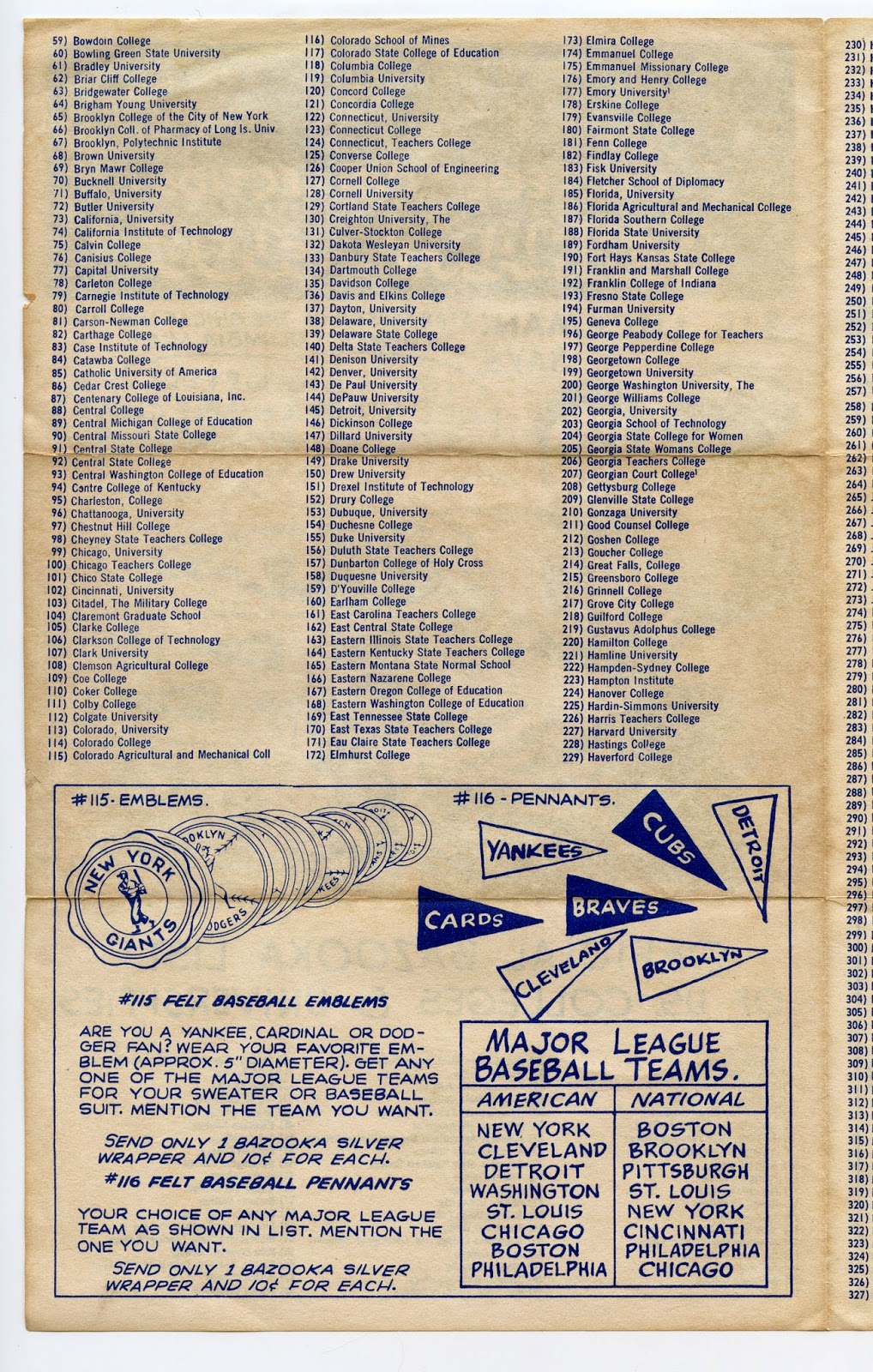 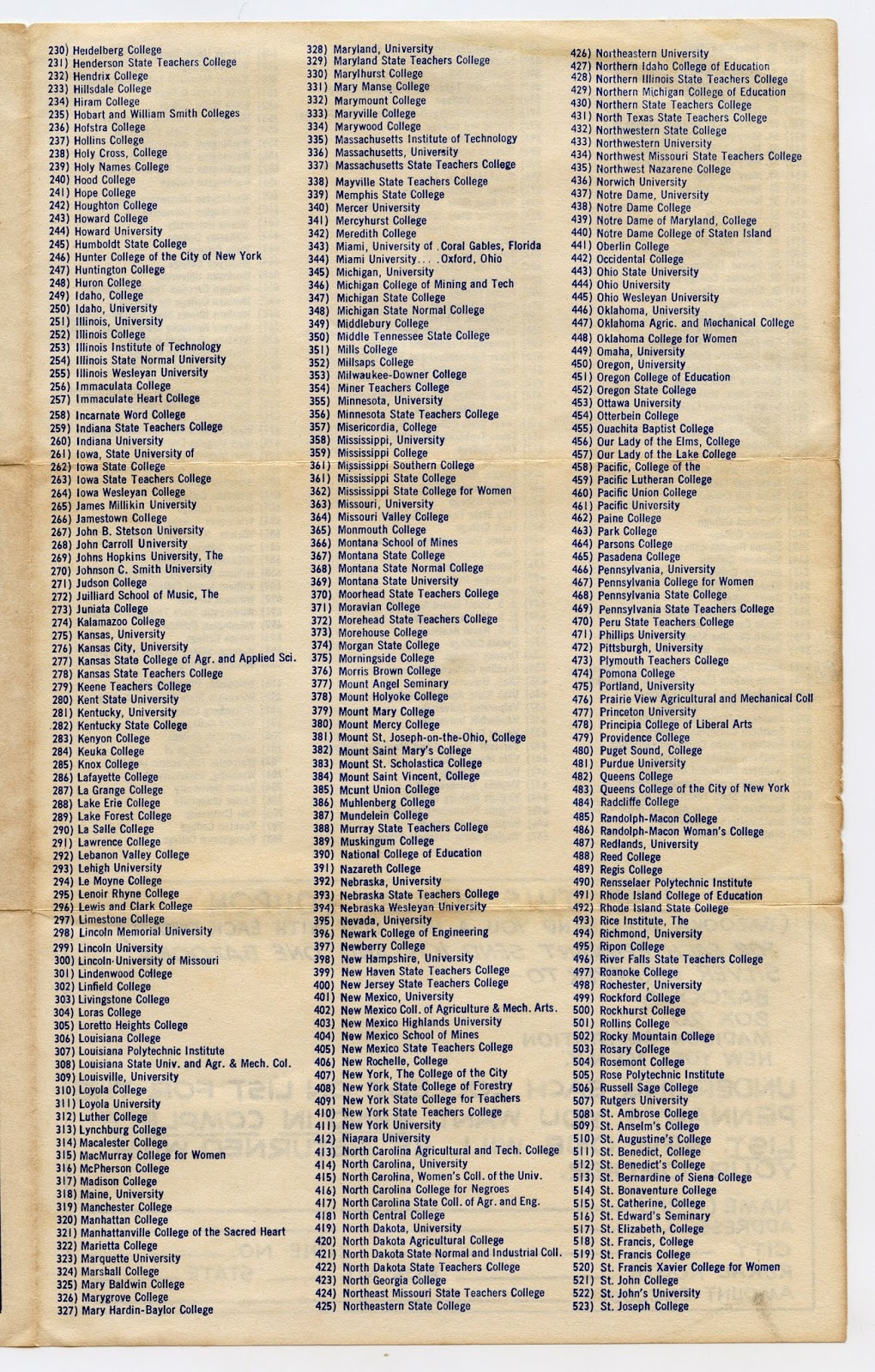 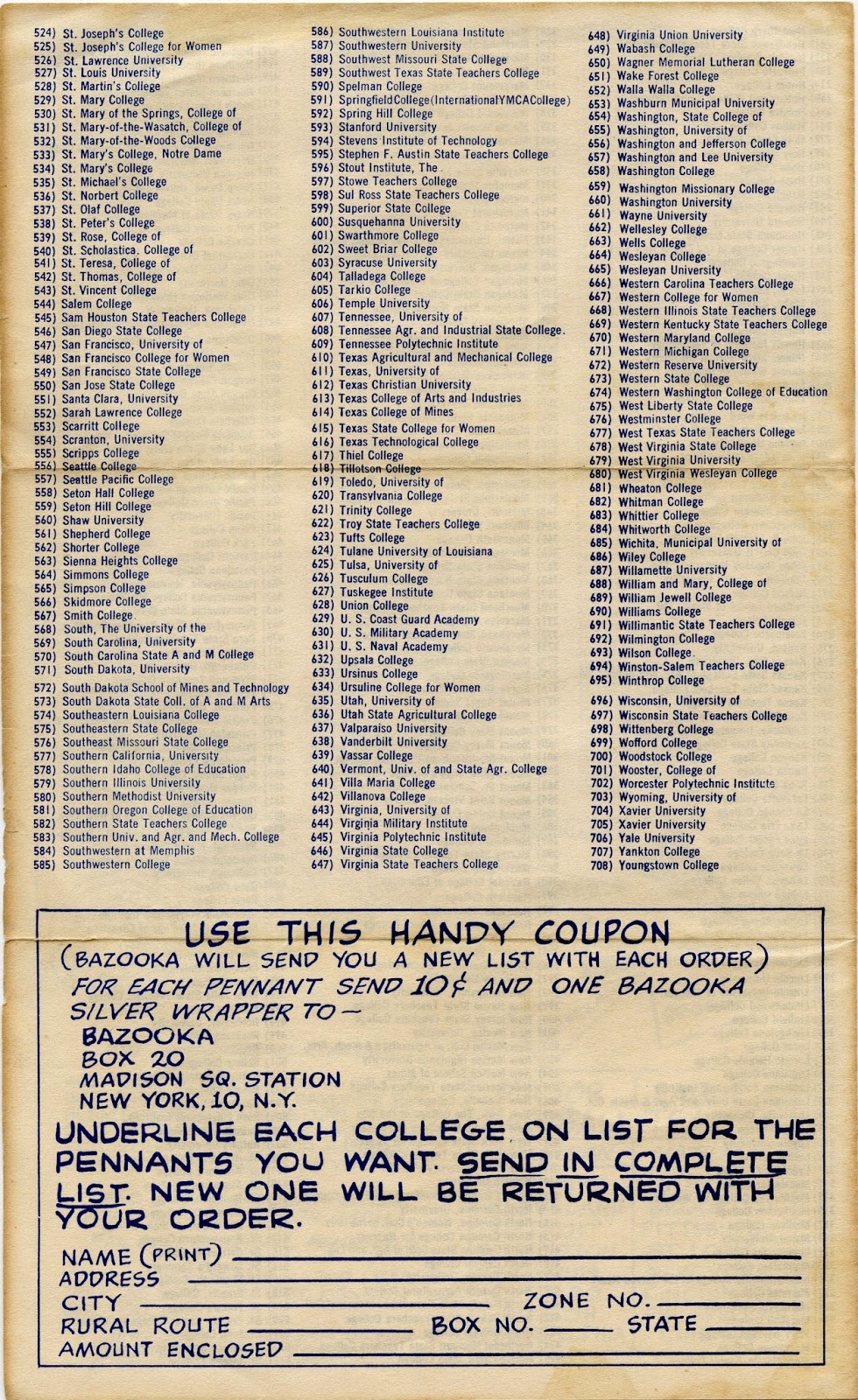 The mere 708 possibilities on the helpfully numbered brochure could be closer to reality but who knows? The pennants must have just featured generic lettering to pull this promotion off. And did you note the offers for baseball emblems and pennants?  The promise of a new catalog makes me think they also came along with other premiums delivered to the suburbs and cities of America. 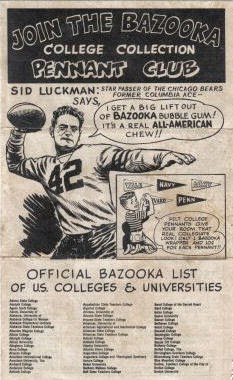 I have no idea which color came first but do see that no numbering appears on the black version.

Identifying these pennants could be tough today; I don't think they were branded like the 1950's versions but there must be quite a few out there.
Posted by toppcat at 1:00 PM