It's funny how an accidental little observation can lead to understanding sometimes.  Take for instance this old promotional badge that was issued for Topps Gum many moons ago: 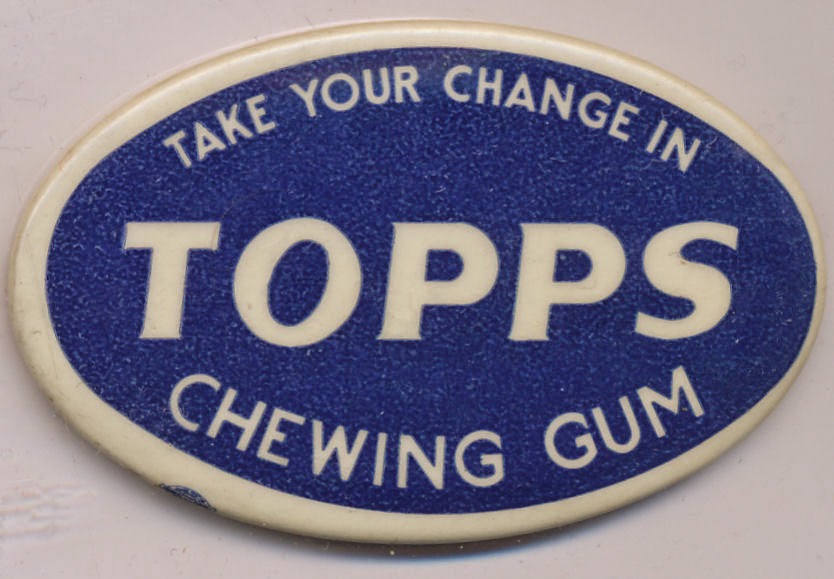 And a back view, since I like to look at both sides plus it has an unusual arrangement of the "pins"; perhaps it was meant to be affixed to a ribbon or streamer of some sort at a Candy Wholesalers convention in the late 1940's: 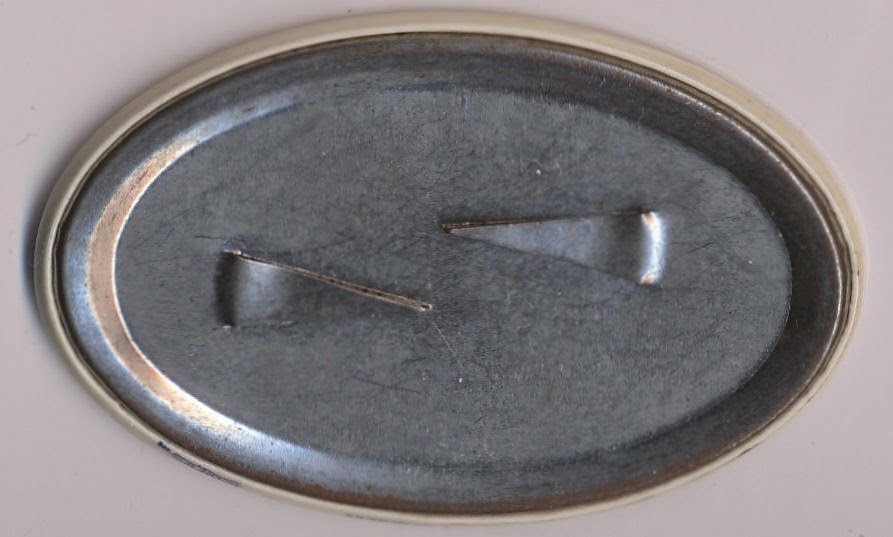 It's a super item and worthy of examination in its own right but I'm after smaller game.  When I obtained the pin I thought the little blue mark near the bottom left edge of the oval was caused by some long ago calamity but when I looked at it more carefully it revealed itself as a union logo:

The printing is kind of muddy but thanks to the manufacturer's information (more on that momentarily) it looks like local 19 in Rochester, New York. It appears to state" Photo Engravers" at the top but I can't resolve it any more, even with a 40x Love Of The Game Auctions promotional loupe.

There is a corresponding union logo on the right bottom edge as well; amusingly the off-centering of the badge (a typical problem for Topps with their cards over the decades) is what tipped me off to begin with, although I probably would have noticed all the details  eventually:

I read it as local 289 of the I.P.E.U. (International Photo Engravers Union). In researching Bastian Bros. (still in existence as the Bastian Company), it turns out they were one of the first union shops of any kind in Rochester and founded in 1895. But a little more of a deep dive on Google revealed another interesting factoid on my buddy Spike's blog, namely that in 1920, 1922 and 1933  they produced sets of pins for Mrs. Sherlock's Bread featuring the Toledo Mud Hens. They produced some other sets as well of baseball players but that I will leave as fodder for the pre-war collectors out there. The ACC # is possibly PB5 in case you were wondering but the numbers for the pin sets I see in the catalog do not match that designation.

So if Bastian Bros made pins for baseball promotions during the Depression, perhaps they worked with another firm in the 1950's that had a Rochester connection, namely Topps Chewing Gum. Topps used a Rochester firm to assist with some of their 1962 Baseball printing (likely Stecher-Traung) and would have known the area since the American Leaf Tobacco Company days. There is no marking on any sort on the 1956 pins (or, more properly, Baseball Buttons) or their retail box but there are not too many coincidences when it comes to Topps.

So it's a leap but not one without merit. I wonder if any materials relating to the production of the Topps pins has ever been found in the Rochester area?