As luck would have it, a nice series of scans of a full set of 1971 Bazooka Football has found its way to the Main Topps Archives Research Complex, courtesy of Friend o'the Archive David Halpen.  So what better way to present a visual checklist than to show these babies in box form. 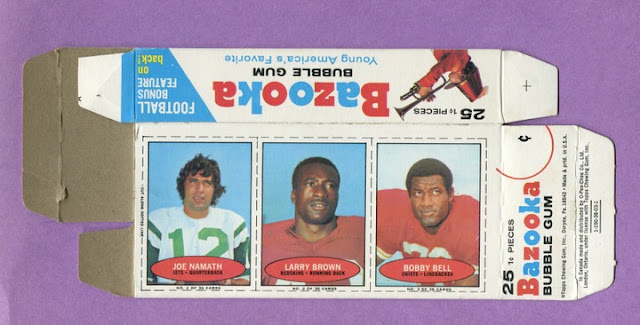 You can see a couple of the boxes don't exhibit the ubiquitous cello tape used to "seal" them.

This was Bazooka's second, and last, foray into football cards on the back of their party boxes.  The first was quite different of course, being the "big boys" in '59 (that I have yet to blog about).  Topps did not have an actual NFL license at the time, so no logos, helmets or uniforms that could show any trademarks were allowed.

The end of the Bazooka back panel sets in 1971 was unfortunate.  It looks like Topps (and O-Pee-Chee, there was a '71 Hockey set as well) were reacting to inroads being made by Fleer (and a few lesser lights) on the sports side before Topps decided to issue an IPO in 1972 and eliminate a lot of superfluous costs before the offering went public.  Too bad, since I've always thought the box back sets were quite nice.

Go check out David's site, he has scans of TONS of neat stuff!