Where The Flying Things Are

If you are a fan of confusion, this post is for you!

Over a roughly ten year period from 1966-75, Topps distributed a series of user-assembled styrofoam gliders called Flying Things.  I touched on them briefly back in 2013 but I've been researching them lately, along with the related Fighter Planes and Marvel Flyers sets.

Flying Things saw multiple releases over this span, while  Fighter Planes was issued twice and Marvel Flyers once. I'll leave the latter two for a later post and will probably have a Flying Things followup as well as this post will be all about the wrappers. I'll try to put things in chronological order but as we'll see, it's difficult to do so with precision.

The first Flying Things issue was released in the spring of 1966. The first wrapper, provided here by Friend o'the Archive Terry Gomes, was a doozy:

The Flying Skeleton would have been instantly appealing to a little boy in the mid 60's.  I was one of those boys but for the life of me cannot recall ever seeing a Flying Thing anywhere. I have zero memory of these as a kid.

The back is handy as it has a visual checklist:

Those are the original 12 Flying Things. The indicia is interesting (I always find indicia interesting):

The Things were made in Japan and Topps is listed as distributor, which is something not often encountered.  This may mean they licensed Flying Things from a third party, something I am working on determining.  Given the curved Topps logo and Brooklyn address this can be pinned to an early 1966 to mid 1969 time frame, although as we will see below there is now an anomaly to this theorem.

Sales were robust enough to warrant a second series (and then some) as these scans from Mr. Gomes demonstrate:

A whopping 24 Flying Things were available in series two:

No change to the indicia, although .the assembly instructions have gone to a more graphical look. I suspect the first series came out in 1966 and the second in 1967 but there are no production codes to go by.

Next up, I think, is the 1970 series, courtesy of Wax Pack Dude.  These are bedecked with a contest to create a Flying Thing on the wrapper and give us a September 30, 1970 deadline for entries:

The back is lacking a checklist unfortunately,which indicates  a rehash of subjects but the contest prizes look to be taken from the gift catalog ballplayers and wholesalers and retailers got to choose from with their various certificates and contractual payment clauses:

The indicia has moved us to Duryea but it's still a distribution deal for Topps:

Made in Japan of course! Here's a look at the box and some packs: 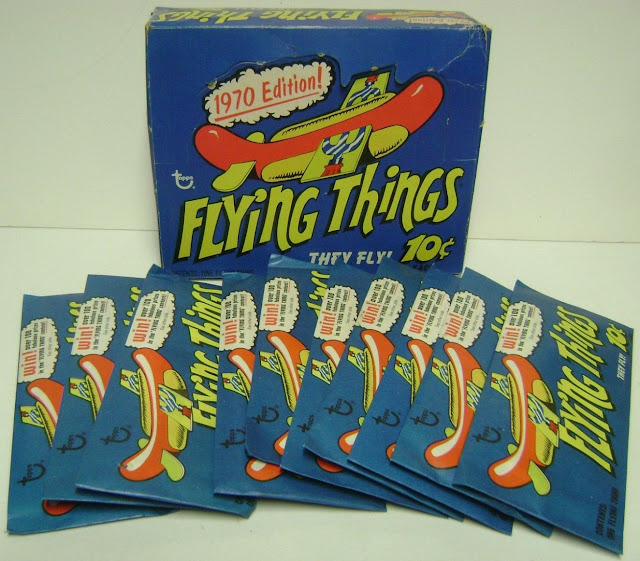 A second series of this run of Things was issued in 1971 and we get a few more hints, once again courtesy of Mr. Wax Pack Dude:

That Flying Bathtub just screams classic Topps design to me.  The back is where it's at:

That looks like a mix of old and new designs to me.  The indicia tells the tale, as always:

It's a little hard to make out but there is a product code that reads: 453-55-1, which puts us in 1971. And, if you are really eagle-eyed, you will note the address is back to Brooklyn, two years after they had made the changeover to Duryea.  I'm not sure why this is; it may have to do with which corporate entity was importing these from Japan. But wait, there's more!

A 15 cent pack with the same product code also exists, identical in every way except for price and the massive, missing "New Series" banner:

Part of the product code (the part after the 3 digit product prefix) refers to the packaging configuration I think, either the box or case for these was likely different than with the 10 cent version.  But wait, there's still more:

That;s the same graphic but the Topps logo got moved to the right and a line about the contents was added (CONTENTS: ONE FLYING THING).  Maybe someone thought there was more than one Flying Thing in each pack and complained?

The back is the same as the orange with one very small exception:

Now we get to a couple of test packs, also from Terry Gomes.  They are like so:

Right away it's clear this is a different beast.  The manufacturing was done in the U.S.A., there is a test code on the front and no price.  We also have CONTENTS: ONE FLYING THING shown. The back only has six in the checklist, not twelve, which is often hallmark of a test issue (a truncated number of subjects when compared to the retail release):

You can see it's a Duryea copyright, although it still says "Distributors".  I'll get to potential dating momentarily as there another test wrapper item as well: 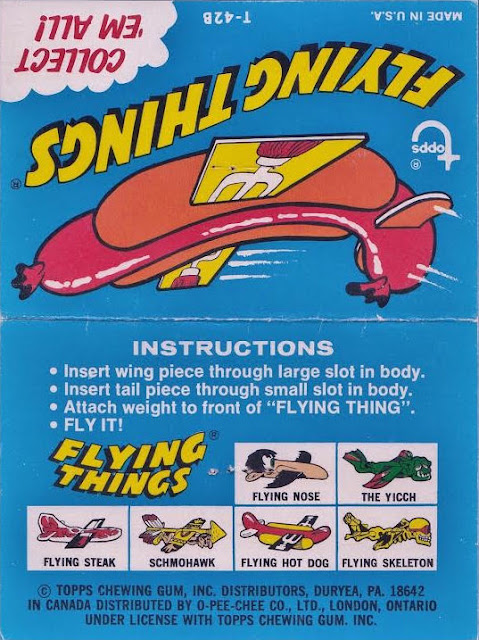 Same as the first test wrapper but this is a header card and has a different test suffix. As Terry explains it:

The test pack was a vertically-aligned cello bag and I believe it was intended to be displayed using a J-hook. It has a test code as shown below. I suspect that there is also T-42A out there as well. As you can see, they only started with 6 titles before moving to 12 when the first series was put into production. In addition, the nose clip on the test bag "Thing" was made of METAL and not plastic like all the other series.
I grew up in Toronto and did buy some of these around 1970-71 but they were not manufactured by O-Pee-Chee. I believe the ones distributed in Canada simply reused the Topps packaging.

The timing of the test is odd, since the series had obviously sold well previously but a metal nose clip in the early 70's is about five years after they went with plastic for the retail releases. It's a bit of a mystery. And as we see above, there is indeed a T42A out there. Still, the graphics match up with the 1970 Flying Hot Dog Wrapper above so it likely was a test before they released Flying Things again.

We're not quite done though.  The cello bag test of 42B may have led to the 1975 issue which was all cello, as per Wax Pack Dude::

Notice there is no price?  The back is like this:

Most of the names have been truncated from the earlier releases but at least we are back in Duryea (and made in the U.S.A.) but still Topps is the distributor. Curiouser and curiouser.

I remember these cheesy little items fondly! But I only ever saw the first series in 1966, never saw any of the later ones! I didn't buy many since you never knew which one you were getting until you opened the package and as expected, the cheap styrofoam would break or fold at some point after you crashed it onto the street. The only ones I really remember were the nose, hot dog, steak, eyeball and skeleton. These were common and most of us had them, sometimes in duplicates, while some of the others none of us ever were able to get.

Really weird thing is that sometime in the 90's I was in a "five and ten" store and there was a box on the floor full of these, first series, still in the package!! I think they were selling for a dollar each. Someone must have dug them out of a warehouse but even at a dollar I was too cheap to relive a childhood memory...

Thanks for this article. I have a flying hot dog and a flying nose, still in their original packaging, from 1967. I was four years old then, but remember them fondly. My buddy found them for us at a used toy store here in New York City, about 15 years ago.

Growing up in Brooklyn in the 1960's these were one of my favorite things!

I loved these as a kid. I TRIED and TRIED to collect them all, but it was impossible. The "Flying Kiss" constituted about 90% of the kits in our area, so I had a lot of those.

It was a great disappointment to have saved enough money to buy 3 of them, and to have ALL three be the "Flying Kiss".

Thank you!! My brother and I were going nuts trying to remember what these things were called but couldn't find anything till we ran into this site. Thanks again!

I remember these as a 9 year old kid in Honolulu Hawaii. My dad was stationed at hickham afb in 1967 to 1969. . I had the twinkle toes plane that had a characterture of a homeless bum. They didn’t fly well and didn’t last long either but were fun to open and assemble. Now I’m 62 and remembering those good times.