We'll shortly be moving more into the 1960's and early 70's in terms of the overall vibe of this blog but there are still many things from and about Topps in the 1940's and 50's worth posting about.  Near and dear to my heart are the postage stamps sized issues of 1948-49 and the last gasp of those little wonders, the Hocus Focus set of 1955. Still without a complete checklist for the smaller sized version some 60+ years after issue, the whole set is a bit of mystery in terms of timing and packaging, although I suspect it was retailed in response to another confectioner's offerings.

I managed to snag an image of the instruction card issued with the larger version of the set recently and it's pretty neat:

I like how you can make out the bare outlines of the World Leaders subset in panel 3.  It's a lot more detailed than most instructional drawings from Topps over the years. The card also shows signs of high speed "ribbon cutting' where strips of uncut cards were cut at high speed, resulting in a slight curl that's just off kilter.

The back is plain Jane man:

I post reverses of things even when blank to help identify potential counterfeits.

I still need an example of the blue developing paper and although I don't collect wrappers per se, I do collect the penny wrappers from these tiny little issues.

I bought my panel from Larry Serota, known to many in the hobby as a collector of many hard-to-find cards. Larry also had a number of auctions going on eBay with small and large groupings from the set.  Here are some undeveloped and uncut panels of the large sized cards, as inserted in the nickel packs, showing how panels of four plus three came packaged, although I have seen some that may be only "twos" (hard to tell this long after the fact): 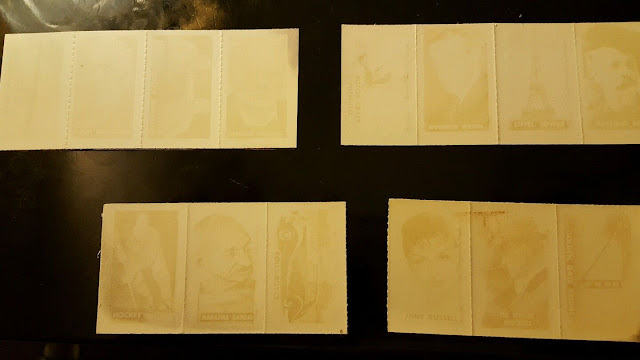 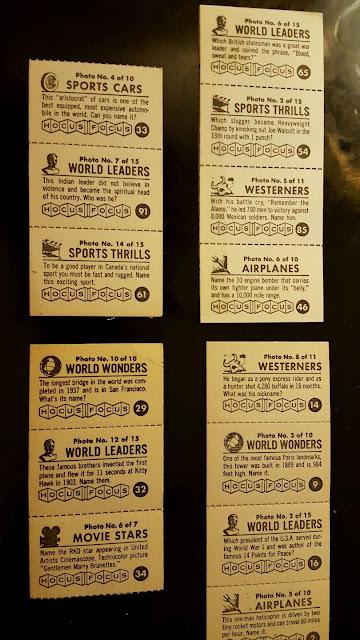 It's one of those sets where the backs look nicer than the fronts!

As previously noted on the blog, the small cards do not show signs of perforations or dotted lines as they were inserted as singles in the penny gum tab packs.

As I stated above, I'll be focusing more on the 60's and 70's going forward but will still, of course, post anything worthwhile from the earlier decades of Topps as items come to my attention.
Posted by toppcat at 8:00 AM