It looks like we finally have resolution on the subject count for the 1971 Topps Winners set, covered here often but most recently here. The checklist jumped from 15 to 19 subjects a little over two years ago when I received what looked like spy camera versions of four new subjects. That count looks to be entirely correct as a proof sheet scan has working it's way to me from the same source as last time.

I think you'll agree there are 19 cards in the full set after looking at this: 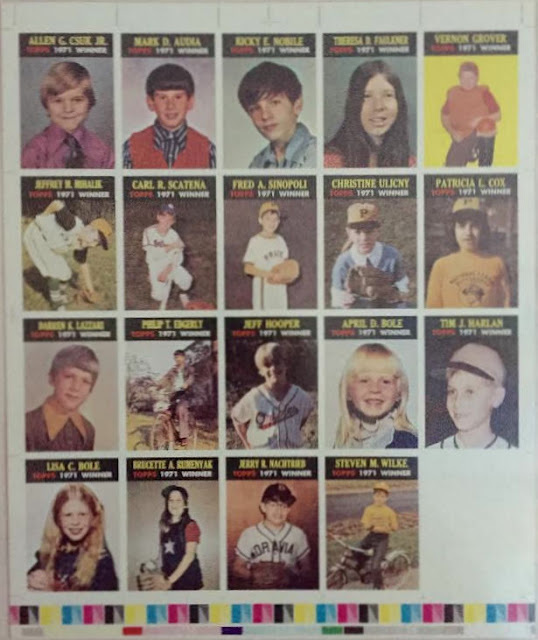 The contest that led to these cards being produced offered 25 winners their own cards.  Distribution of the contest boxes, which were specially marked by Topps, and the close proximity of some of the the hometowns of the winners makes it clear only a select few areas even got a chance to enter as random chance would not yield the geographic concentrations seen.  I suspect, based upon this odd distribution, Topps was running some kind of test or survey in the areas of distribution to see if a contest would increase sales. I'm guessing the results were not what they wanted since they could not fill out a full slate of winners.  And let us not forget the Bole sisters. A large, random contest would probably not see two sisters each win.  Maybe their Mom or Dad made a good case for them to both be included!

The sheet has the backs so it looks like a final process: 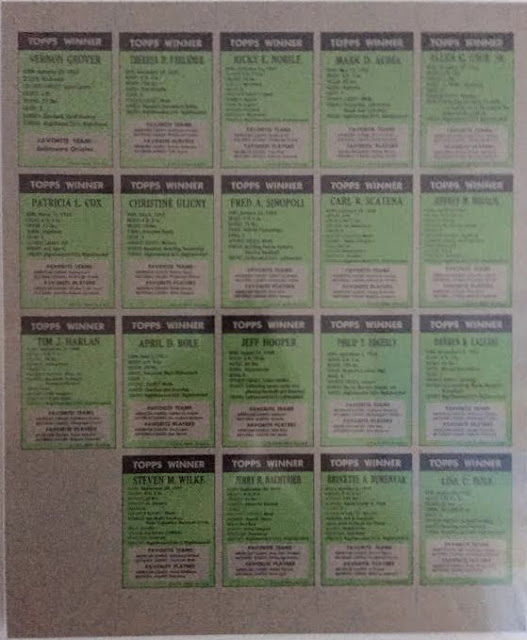 Cards from this set have been going for big bucks after being essentially ignored for years.  I don't see that they have made the PSA Registry but no doubt attempts are being made to have the set included.

This likely ends the saga of this strange set.  I'm happy I was able to suss a lot of its secrets out over the years.