I thought I would do a deep checklist dive on the Bazooka Baseball sets today.  Anyone who collects vintage cards knows about them and I know all of my faithful readers do; I even wrote about them here about five years ago, although it wasn't meant to be an in-depth post.  But it's hard to tell certain issues apart in the years covering 1960-67 and I can't swear I've seen an alphabetized list of all subjects anywhere that includes the 1964 Stamps.

This may be a bit of a mess format-wise but so be it. I'll post scans from each year first, then present an alphabetical checklist.  Finally, a chronological list is shown that details where each player appears on the three card panels (where appropriate) that make up the majority of the issues. There are 725 cards and stamps all told (counting the All Time Greats "silver front" cards from '63 and the proofs from 1971). If I'm not mistaken, Willie Mays is the only player in all Bazooka sets that included current players. Hank Aaron did not have a card in 1961 or else he would also have touched 'em all. Mays holds that distinction in other runs of sets as well such as the 1967-68 Discs.

And a word about the 1969-71 issues.  It's odd Topps repeated the All Time Greats 1969 design and subjects in 1970. There is a theory (not mine, but it's certainly plausible) that the numbered, 48 card "proof" set attributed to 1971 was intended to be the 1970 issue but for some reason it was withdrawn and the unnumbered, 36 card set was issued in '71 instead.  Player selection in the "proof" set seems to bear this out.

1959
The only Bazooka set of current players issued in a large format that is probably one of the top five or ten sets of all time in design and composition. Too bad this style didn't continue. 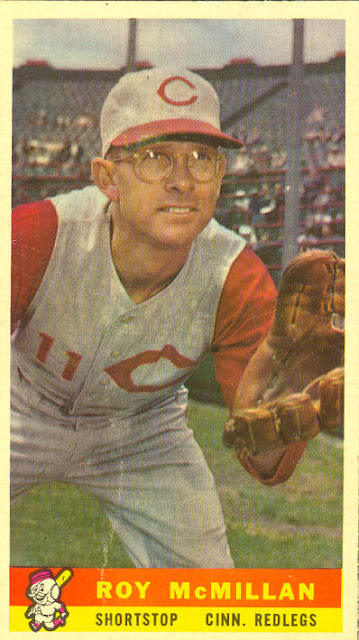 That one is mine.  The next eight scans are mostly nicked from some old Huggins & Scott auctions; they have probably sold more complete Bazooka panels than any other auction house.

1960
This is the first year, of course, featuring the familiar three player panels on back: 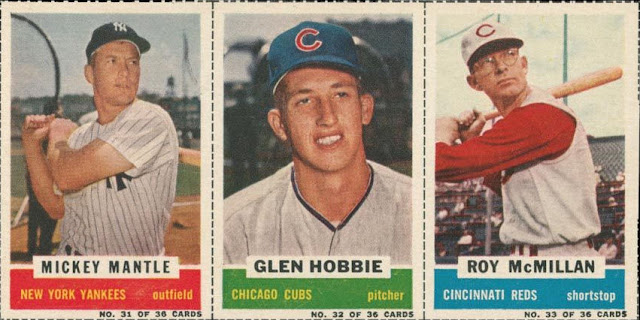 1961
This is a continuation of the previous year's design, illustrating why I've configured my chronological checklist by panel positions: 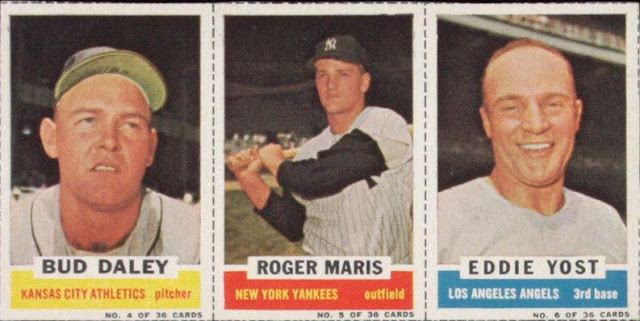 Lost of obscured logos and capless shots this year due to AL expansion.

1962
More of the same design-wise but the No. X of X Cards indicia is gone, maybe because the count went to 45 this year: 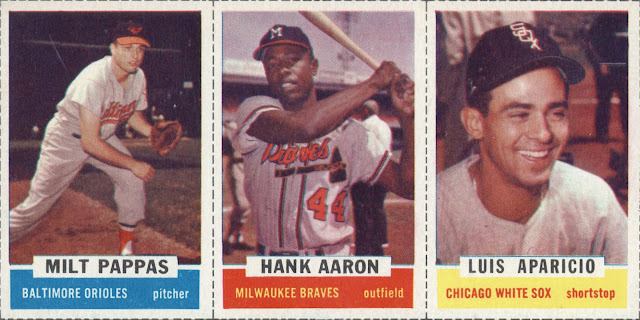 That scan is from my buddy Al's Love of The Game auction site.

1963
A new design following two years of MLB expansion but back to 36 cards: 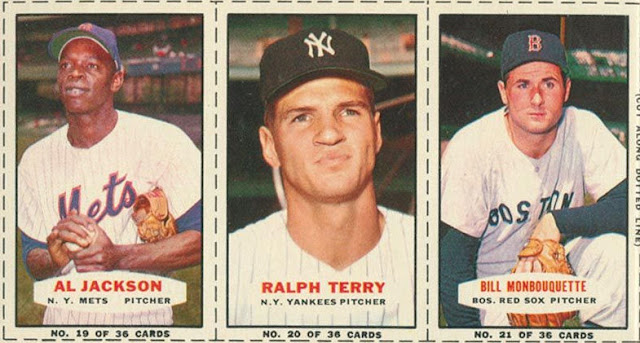 1963 All Time Greats
This is the exception to the Bazooka rule, namely a single card issued inside the box and also one with information and text on the reverse.  The standard gold version is shown first, note the gold highlights on the back (and the TCG indicia, these should really be classified as Topps cards): 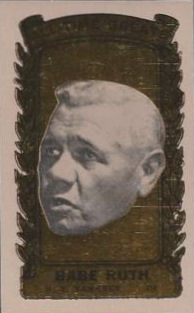 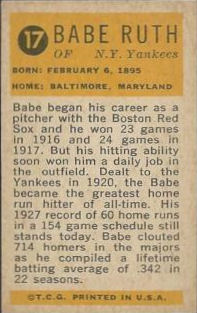 Here's the silver version.  You can see how much lighter the background and laurels look without the gold foil applied:

No gold on the back either: I'm pretty sure these were a separate press run and not errors: 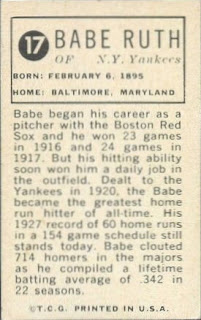 Five ATG's were found in each box! 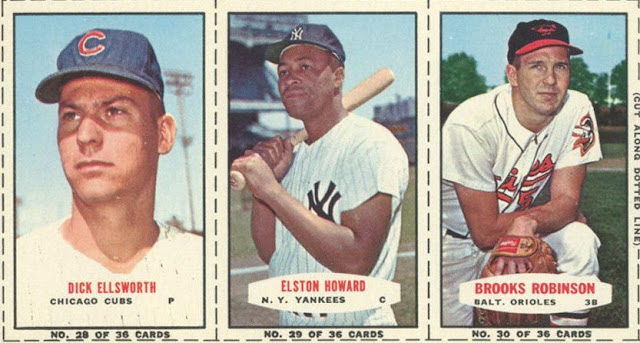 The photography for the stamp set is pretty nice! 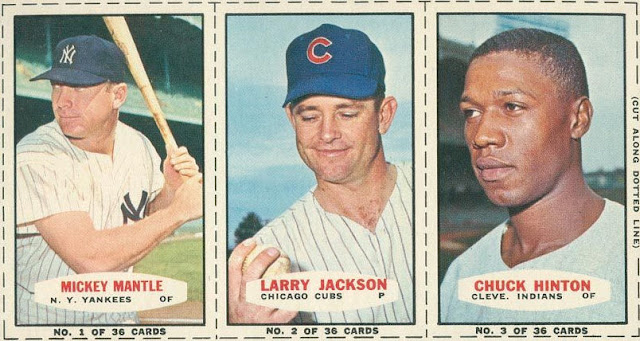 1966
Sorry for the H&S partial watermark but I had to get another shot of McMillan in here with his Mets uni.  Does this design look familiar? Note the increase to 48 cards. 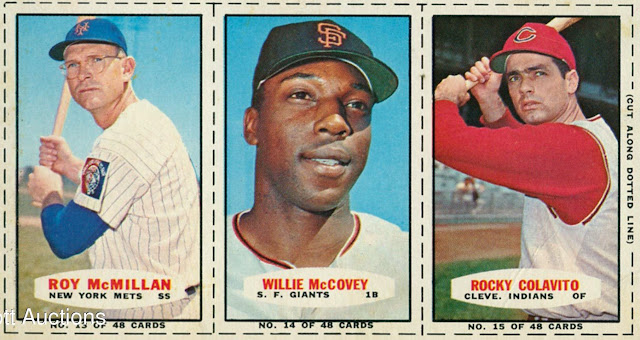 1967
The end of an eight year run of three player panels, although they would have a last gasp: 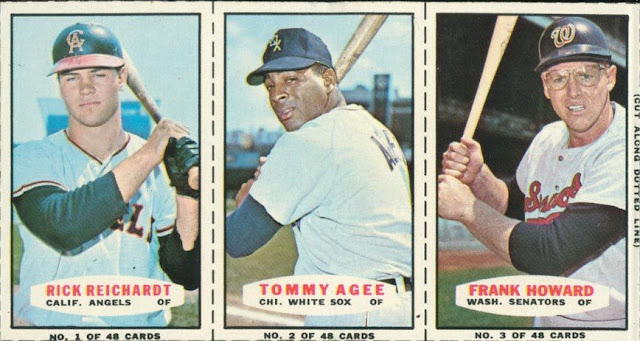 You should read this article over at Sports Collectors Daily on the 1966 and '67 issues as they are very similar; half the panels are completely identical! The 1967's have a commodity number on them below the rightmost card in each strip that ends in a "6"; this is the year of conception, not of issue. If you have a panel that could be from either year and a portion of the commodity number is showing it's a '67:

1968
A whole new ballgame this year. Tipps from the Topps on the back of the box and slender cards on either long side panel, stacked vertically as this scan from Kevin Savage Cards shows: 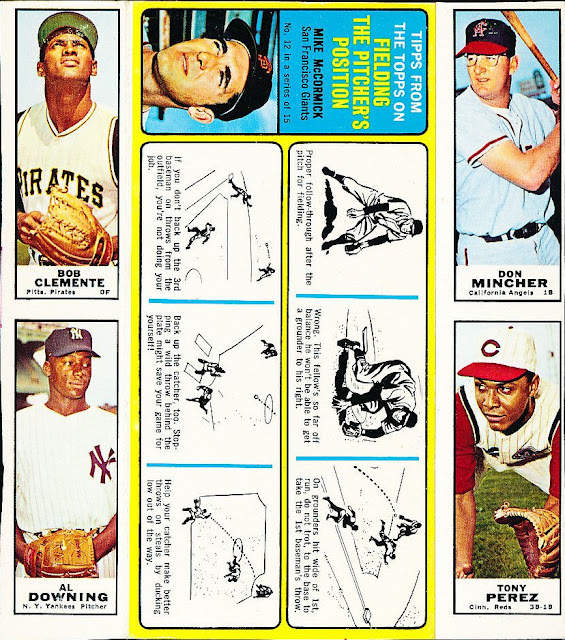 The Tipps from the Topps were reissued later without the player photos and cards. If you see one of these, courtesy of Friend o'the Archive Matthew Glidden, it's the reissue:

You'll note only 12 made the reissue, not 15.  There's also a booklet of all 15 Tipps that still have the player photos but in black and white, I'm not sure but it may have been a premium. It's pretty scarce: 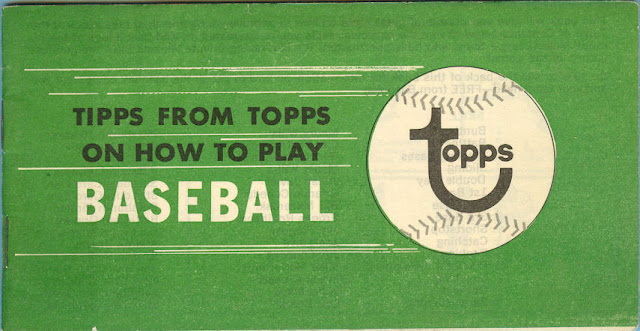 Here's a look inside: 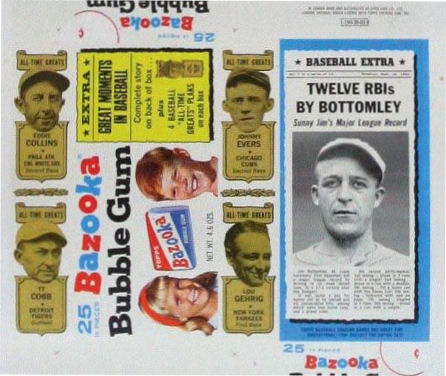 If those head shots look familiar, it;s because they were recycled too!

I've never really been able to figure out the source of the numbered issue. It was clearly produced in numbers far exceeding any actual proof run but the launch into the hobby is still a secret I guess. I'm sure it was through one of the usual conduits back in the day like Bill Haber or the Card Collectors Company but I've never seen anything specific.

Thank you for compiling and sharing all that information! I know I'll be referring back to this in the future.

I've been admiring 1959 Bazooka from a distance for a couple of years now, but the prices don't generally fit in my budget. Now that I've seen that Roy McMillan, a beautiful, non-short-printed common, I at least have a particular card I can target.