How To Make A Monster

Topps would often release a set or two of Monster themed products around Hallowe'en every year. They had briefly issued a product called Trick or Treat Bubble Gum around 1950 but it wasn't until the end of that decade that Monsters started showing up on a regular basis with the introduction of You'll Die Laughing.  Those cards and other similar stickers,tattoos and novelties were a staple of many a Hallowe'en well into the early 1980's and card and sticker overstock was often recycled in Fun Packs in years where a fresh set was not issued. I recall getting two "funny monster" card cello packs with gum on Hallowe'en in the early 70's and Topps easily got another ten years out of the theme.

However, there is one Monster set that doesn't seem to be tied to Hallowe'en and it's 1974-75's Monster Tattoo. Harkening back to a  classic 1962 issue (Monster Tatoo), Topps revived the vegetable dye wrapper interior classic with a modern touch.  Consisting of two 30 subject series (Topps helpfully numbered each wrapper) these followed on the heels of a similar Wacky Packages Tattoo series of 1973-74.  The Wacky tats sold for two cents and it's presumed the Monster Tattoos did as well (I have not seen a box).

Monster Tattoo wrappers are quite colorful:

The tattoos are typical Topps fare, drawn by Jack Davis. Here are examples with the "A" and "B" series numbering scheme (30 in each):

I nicked those images above from www.wacky-packages.net by the way.

So how do I know the set wasn't issued around Hallowe'en?  Because of the original artwork: 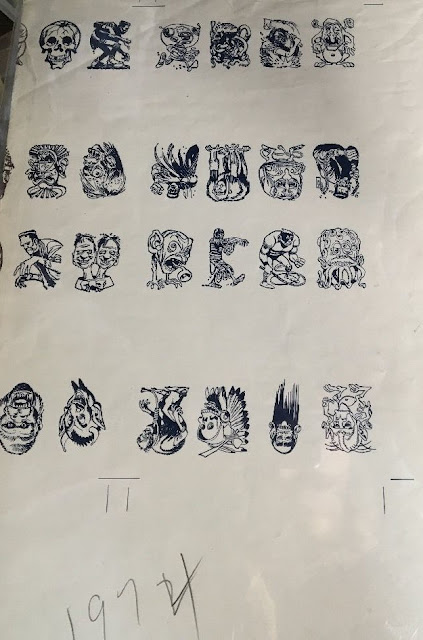 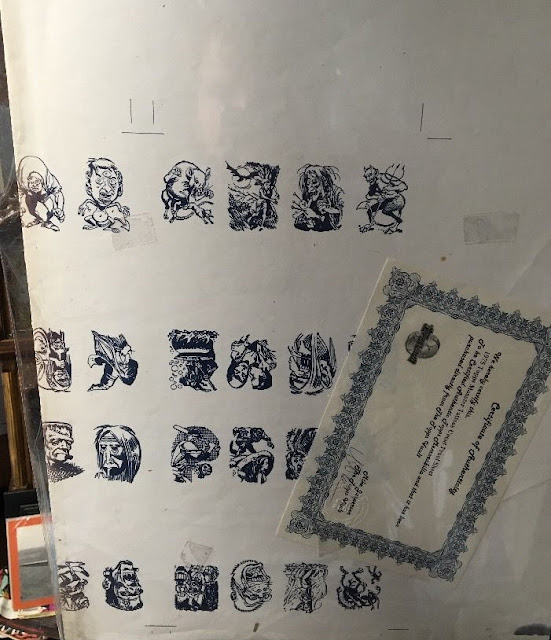 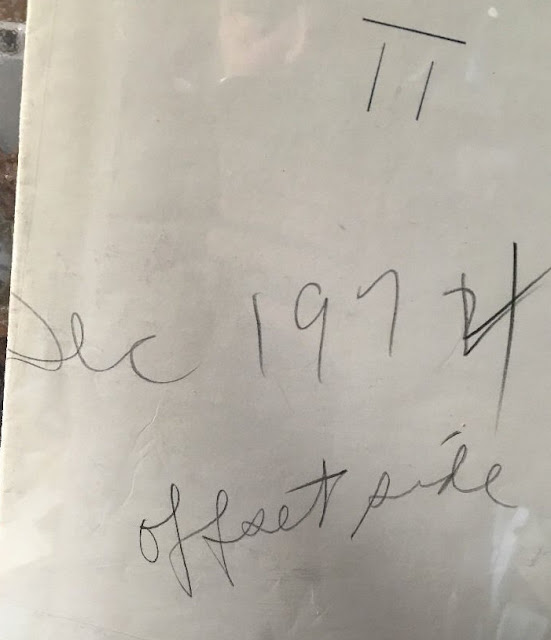 They look just about ready to go to print at that point, no? That last bit is interesting as it looks like a 2 was changed to a 4 (although I think the 2 is just a check mark) but the real fun is the "Dec" notation. I'm not sure why a Monster set was being prepared for a winter release but the relative scarcity of examples makes it likely sales were poor.  The Wacky Packages Tattoos are not that easy to find either but these seem more difficult. Did Jack Davis do all his artwork on couple of sheets and draw his own registration marks?!

These are popular; monster themed sets certainly draw a crowd!