It's spring, baseball is in the air and your blogmaster is knee deep in outside world problems at the moment, so hang on for what may be a brief run of lighter posts until my schedule sorts out a little bit. I thought today I'd just show some favorite cards of mine and after I picked out the first three realized I was in Terry Cashman territory and decided to just run with it.

My obsession with baseball began in the summer of 1969, when the Mets were making their run to the most improbable of outcomes and I can still remember watching on the black & white Zenith TV in our living room as Cleon Jones secured the final out in Game 5 of the World Series.  The next four seasons were prime ones in terms of sucking up everything I could about the game.  The Mets landed Willie Mays in 1972 and of course this was the biggest thing in the world. The two hugest names in baseball, at least to me at the time, among the non-Mets of the planet were Hank Aaron and Willie Mays.  Having one of them come to my team was just fantastic, although I did not grasp at the time just how close to the end of his career Willie was.

Rounding into form as the nerd I would eventually become, the New York Times Book Review led me to Roger Kahn's The Boys of Summer (still my favorite baseball book) in the winter of 1972-73 and a further obsession with the Brooklyn Dodgers, a team I never saw play as they had left town four years before I was born.  They were my dad's team though and he knew their history as well as anyone. I found the Duke Snider story particularly moving, although in later years realized that perhaps the Duke's failed avocado farm was not quite the earth shattering disaster Roger Kahn made it out to be. A couple of years later a friend gave me a paperback copy of Jim Bouton's Ball Four and I marveled at the antics of one Mickey Charles Mantle within.

So here they are, my favorite cards of four players who define a certain time of my life.  We'll start with Duke Snider in 1952: 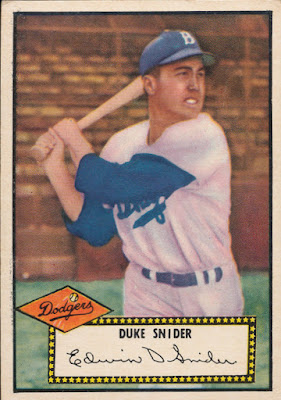 I'm not sure if it's the slightly blurry, pastel background (I'm a sucker for those in the 52 set), the follow through pose (not a common one) or maybe the backdrop of the Ebbets Field stands but for some reason this is my favorite card of the Silver Fox and one of the first cards I picked up upon re-entering the hobby in 1981.

The 1967 Topps card of the Mick is a departure of sorts from the customary shots Topps used of him over the years. I just love this card, it looks like Mantle was remembering the great time he had shooting beaver the night before. Plus it's a dugout shot, which I am also partial to as they were pretty offbeat poses back then: 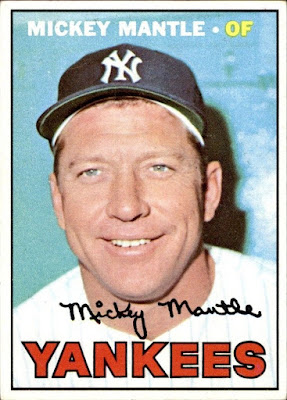 Everybody raved about Willie Mays in his prime in New York but my favorite card of his comes from his last year in San Francisco. The 72 set has one of my favorite designs and Willie is j-u-u-u-u-s-t pre-grin here: 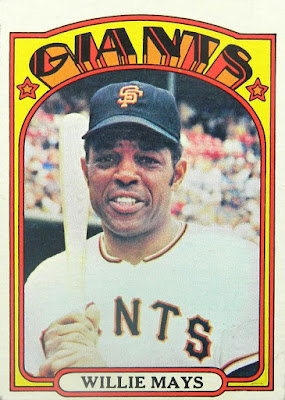 Finally, we have Cleon Jones. Along with Tom Seaver he was my favorite Met and while he had a solid, if unspectacular career and ended his tenure with the team in ignomy, I still count him as such. A favorite pose of mine generally: 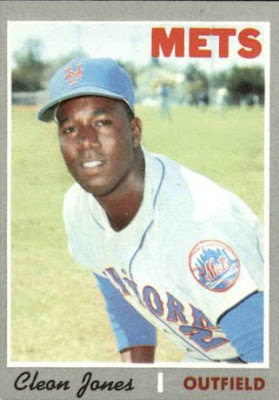