While the kinks have previously been ironed out of the 1971 Topps Winners set, additional information keeps seeping in. We know the 19 cards in the set were actually issued in 1972, although I'm keeping it as 1971 here because I don't think:

a) anyone cares and
b) any references out there in printed guides, on the web or what have you all refer to 1971.

As mentioned previously, winners of this contest received 1000 cards of themselves, plus a "spiked" box of 1972 Baseball, where their card was inserted into each wax pack.  Thanks to Friend o'the Archive Jake Ingebrigtson we have a little more information on that part of the process and a better scan of one of the four subjects that popped up recently, finalizing our set count at 19, namely one Steven M. Wilke: 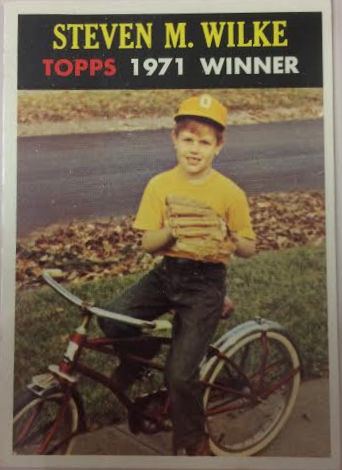 I was hoping the back scan would provide more information on the locale of Steven but I don't think there is enough there to be sure: 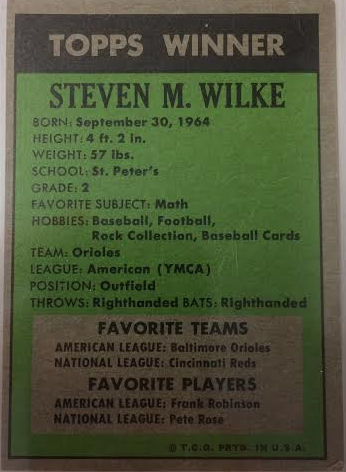 It's possible he was from an area in the Baltimore Orioles TV broadcast beam (and at least one other subject in the set was likely from the Baltimore area) but they were the hot AL team of the time so it's not a certainty.  The Reds could indicate an Ohio or West Virginia locale, which has been an area where another winner was located.  The seemingly main distribution area of Pittsburgh and California are two other hotspots for this set as well.  It's pretty clear the entire country did not get a chance to enter the contest given the clustering of subjects, although why remains a mystery. Although......Jake advises he found the Winners card in a collection of 2000 cards he bought from a collector who grew up in Minnesota.  To wit:

"He (the collector) grew up in a town in southern Minnesota named Red Wing. He has had the cards I purchased since he pulled them out of the packs as a kid in the early 70's. When I talk to him I'm going to ask him of any alternative way of getting cards (such as fun packs). He was old enough to remember buying all series at 1 time in 1973 (and being surprised by it) and having a hard time finding high # packs in 1972. Him and his brothers seemed to pay pretty close attention to what went on in terms distribution as their goal was always to complete a set."

Well that is quite a paragraph, no?  If some Winners cards made it out to a retail setting, then they have to be among the scarcest Baseball insert sets Topps ever issued. What could the total print run have been, 20,000?  Winners keeps coming back and surprising us!

Have you tried looking for any of the winners on Facebook?

His favorite AL team might be something of a red herring with regard to where he lived. His team is listed as the Orioles in the YMCA's American League, and he's wearing an orange shirt and an orange cap with an "O" on it, so it could be that he liked the Baltimore Orioles solely because he was on the YMCA Orioles.

Nothing on ebay - amazing card. From a pack of Topps cards I bought in Pittsburgh in 1975, I received a mini card of Sal Bando (at the time I had no idea what it was and would not known about the existence of 1975 minis until I got a Galasso catalogue (Or Sports Card Magazine) a few years later.