Dearth Of A Salesman

Yonks ago, when I made two posts (here and here) about the old salesman's sample strips Topps used to print up and send to their wholesalers and the like, there were four strips I could not find scans of.  And yes, I know that I ended that last sentence with a preposition and, also, that a lot of the scans on those old posts are fuzzy as can be. I'll probably amend those fuzzballs someday but for now, will have to be content with filling in some of the missing examples.

The 1958 looks to have very much set the tone for 1959's model.  Check this bad boy out, courtesy of Friend o'the Archive Don Johnson:

That's a killer shot of Billy Hoeft by the way.  Now, look at this back, which is also red, red, red:

Now compare that to this 1959 sample reverse:

It appears that Topps could manipulate the reverses to allow an area for an address to be added, so these samples were used in a couple of different ways at least.

As previously noted, the last sample was produced in 1967:

I always liked that shot of Earl Battey in his windbreaker.  Reverse-wise, while the authenticity of the autographs is dubious, someone at Topps clearly loved the idea:

So that example was for a jobber (wholesaler).  In 1967 they probably had as many orders as they could handle. Now, take a look at that illustration of the Dodgers player.  It must have been drawn by the same hand that did the 1965 Topps Transfers: 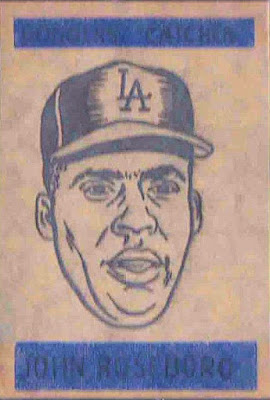 As Winston Chuchill supposedly (but almost certainly never) said, ending a sentence in a preposition is the sort of bloody nonsense up with which I will not put!