You may have noticed I'm wading into Bazooka territorial waters with increasing frequency these days; it's certainly true and I'm even diving into the Blony tidal pool where I can. This has been prompted by a mini wave of uncut material from the 1950's surfacing along with some random single pieces and lots coming up for auction and a barrage of incoming scans from BFF o'the Archive Jeff Shepherd.  In short, I have not seen this much comical activity since the last time I saw Dave Attell and Lewis Black perform together (with Mitch Hedberg and Mike Birbiglia supporting no less-true story).

First up is our old pal Buzzy.  This particular Bazooka comic, featuring the namesake character, saw at least two if not three distinct printings around 1953-54 as these scans from Shep show:

The top two are essentially the same but the first is waxed while the second is not.  The unwaxed comics are out there in significant enough numbers that they appear not to be print freaks but rather a separate run.  Maybe the unwaxed versions were sold in the party boxes of Bazooka?

The bottom Buzzy is clearly from a second print run as the font for the Fortune is different and the premium offer has had an expiration date added.  Here are closeups of these areas of interest from the top and bottom comics:

The life of the premium offers is generally 15-18 months, so the undated varieties are likely from 1953 and sold into 1954 while the dated versions are from 1954-55 and contemporary with the first Bazooka Joe and Henry comics, last seen here. The knife also became "free" as it aged! I realize only about six dozen people on the whole planet care about this all but these are clues to the dating of these comics, which are scarce. 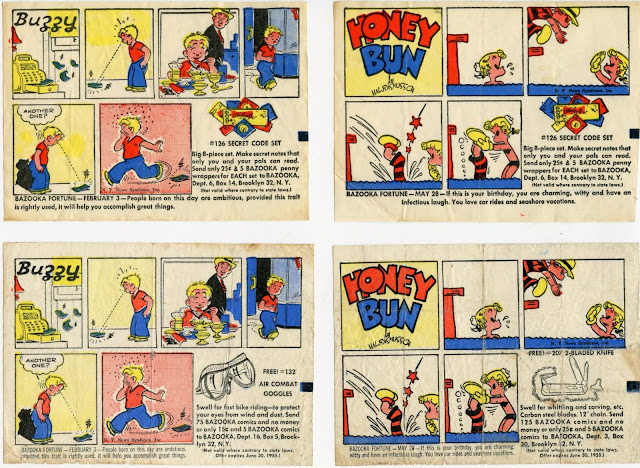 Well, looks like the undated comics had a nice little secret code kit that ran its course and a quick substitution was made.  Since Buzzy had the knife in color and Honey Bun didn't, it suggests the color separations were not prepared for the goggles and knife due to rushed production and only the line art was used to print these. The font changes we saw with the Buzzy comic above also come through on both of these. I wonder if Topps thought their market was skewing very young at the time due to the mostly non-textual nature of these strips?

More New York News Syndicate goodness.  The lack of text continues with Little Brother Hugo; no real insights from these but I just like showing them: 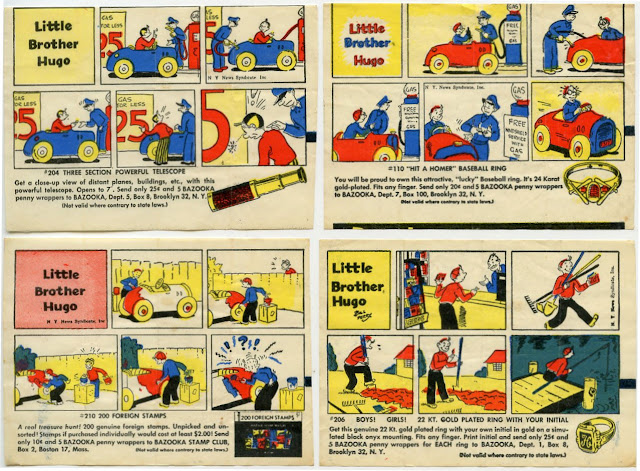 I like the 22 and 24 karat rings!  The Bazooka Double Feature Comics get a little more texty: 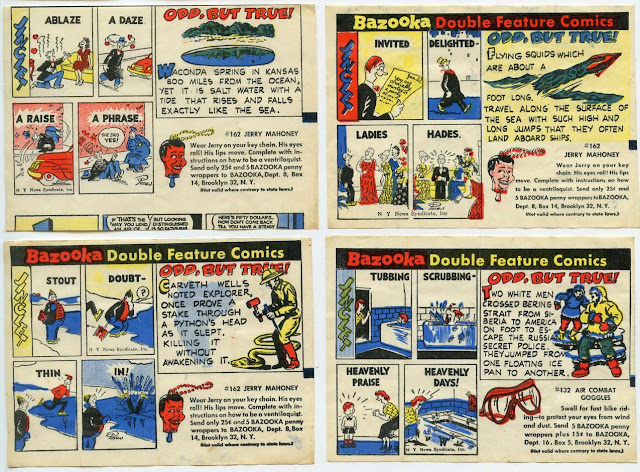 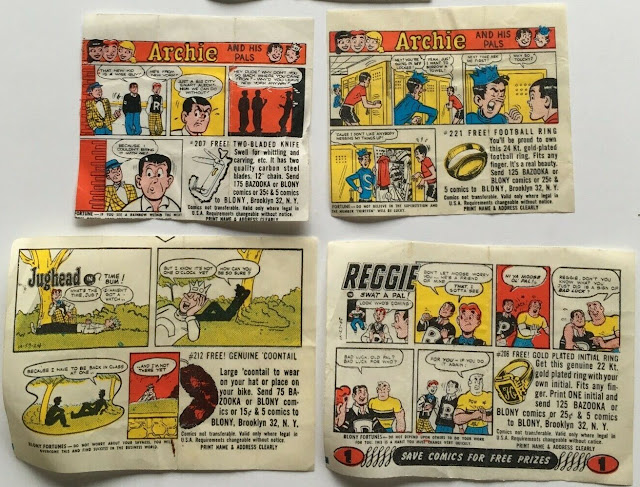 That top left one looks like it has a familiar premium offer, no?  I like how they never even bothered to prepare color separations for the knife but changed the text from the Bazooka version!  Maybe this means the comics were printed in more than one location?  I really don't know but color and no-color versions of the knife offer occurring over a 3 or 4 year period does seem to point at something like that.