Like many collectors of prime vintage material, I am enamored of the 1968 Topps 3-D Baseball set. It's a classic looking set (teeing up the 1969 regular issue card design by the way) which has the lure of Hall of Famers (Tony Perez and especially Roberto Clemente), local names (Boog Powell, Mel Stottlemyre) and a preponderance of Yankees within (Bill Robinson, Stottlemyre again comprising 1/6th of the issued set), aided and abetted by test issue status and shimmery, oozin' ah lenticular technology.  It could be argued that it's the most popular, well known and sought after test issued set produced by Topps.

I've certainly posted on it enough over the years (a couple of weeks ago was the latest one and germane to this discussion, so click on over) but when I recently took another look at some production materials, a couple of things jumped out at me.  I also dug out an old scan of a proof sheet from a Bill Goodwin auction many years past, to wit: 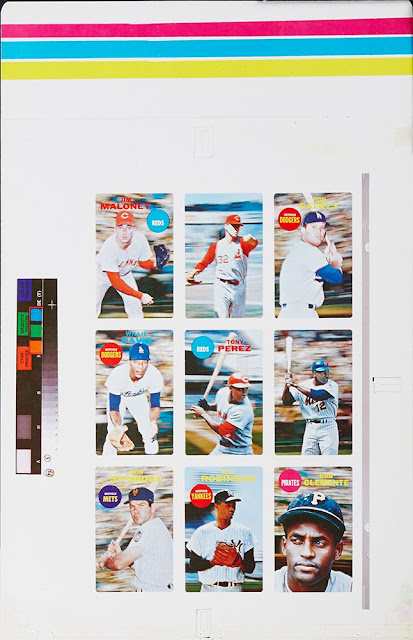 Color bar tests by the Topps printers are common enough but I've never really examined the color key along the left side before.  It seems like it should be related to the 3-D effect as it appears quite involved. I wonder if the key was also meant to covered in the final proofing stage with the ribbed material used to create the 3-D effect?

I think it's something akin to a "chromakey" (the green or blue screen background technology used as special effects film or broadcast backgrounds).  Also of note is the lack of the Xograph indicia on the card faces; not surprising as this proof sheet lacks the black color process.

Here is a more trimmed down proof of the same sheet, where the black process has been added and indicia is present..  Maloney and Fairly are shown with their "dugout" variations here: 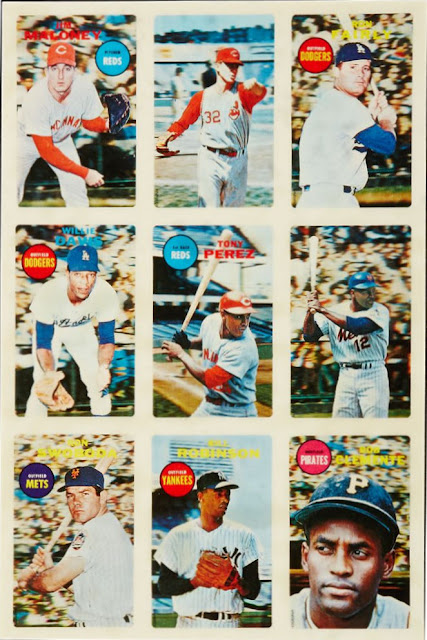 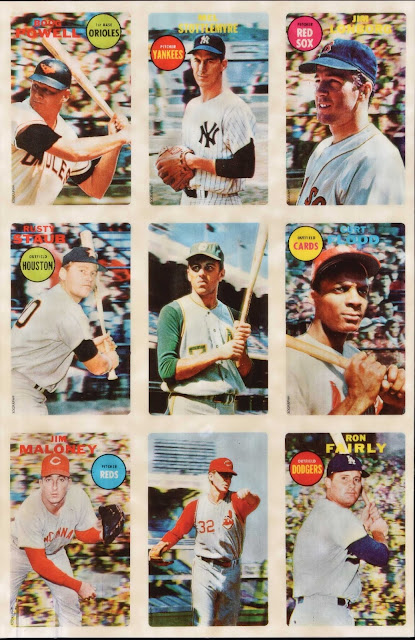 This one has the lenticular coating applied, the two "no dugout" variations and also shows the Xograph indicia plus the pull marks often seen on the issued "no dugout" Maloney.  He's hard left in the bottom row here and my Swoboda card from this set also has pull marks; he's also hard left, bottom row present in the unfinished sheet so I guess we have found the production weak spot! Rick Monday in proof form is dead center and just below him is the variant O'Donoghue.

The unissued proofs being mingled with the finished ones is intriguing and it's worth noting the O'Donoghue variants (Yankee Stadium bleachers background vs. Yankee Stadium facade) as well.  I surmise they were looking for the best options once the coating was applied.

I believe both sheets are blank backed (i.e. unstamped by Visual Panographics), the REA one at bottom certainly is as they mention it in their description.

The 12 issued subjects appear across both sheets but there are Staub, Willie Davis (possibly a proof), Flood, Perez and Powell variants not represented, so I surmise at least one more proof/pre-production sheet was created. A hand cut "squared off" Clemente is known in finished form, so I wonder it it came from a third sheet taken home by an executive at Topps or Visual Panographics and cut up by Junior back in the day.

I am also pondering the thought some sheets were die cut after the test ran its course vs. them all being cut prior. At a guess, given the seemingly New York City-centric testing of this set, Topps did not die cut the remaining stock from sheets in Duryea and could have just done the whole thing out of Brooklyn post-test, knocked out quickly at the executive offices there and then back-channeled into the nascent hobby. Another possibility is they were die cut by Xograph in Texas.

There's about 650 PSA graded examples out there plus roughly 160 SGC's so it's a bit more available than many tests of the 60's-there's a high of 83 graded examples at PSA for the Davis and Fairly cards, with no distinction regarding variations for either. It's hard to tell due to re-subs but just extrapolating those graded figures and figuring there is also an ungraded population, I think each subject can be found in at least the low three figures (200-300), inclusive of variations. It's certainly not one of the tougher test issues in terms of quantities available. It is however, one of ,if the not the most, popular tests out there in the hobby.

I'm gathering scans of the variants involving Willie Davis, Flood, Perez, Powell and Staub.  They are not as obvious as the Maloney and Fairly Dugout/No Dugout variations so there's a fair bit of investigation to be done still on these five.  I'm also trying to cipher if there is another subject will pull marks along the bottom, which would lend credence to the third sheet theory. More to come!
Posted by toppcat at 8:00 AM