One of the more fascinating, popular and somewhat studied byways of the 1952 Topps Baseball set is, of course, the high numbers spanning #311-407.  Planned to coincide with the 1952 World Series, the set is heavy with New York and Boston players -- more than half of the high numbers at 49 in total -- reflecting the main, limited distribution areas of the time. The highs followed on the heels of the semi-high numbers, a fifth series spanning #251-310 and the last one planned to be part of the now legendary 1952 set until Sy Berger allegedly/possibly/definitely talked Joe Shorin into issuing a sixth and final series (or "second" series as Topps referred to it at the time). 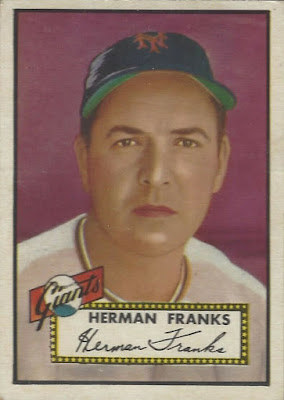 The highs fanned out from the Northeast, spreading south and west and some didn't hit the West Coast until 1953, but the general gist is sales were extremely subpar.  I believe there was vending produced too, although any Topps vending numbers at the time were miniscule. I have never seen mention of a penny pack or ten cent cellos for the high numbers and some highs were issued in a blue and red wrapper, distinct from the green and red wrapper that held cards from #1-310. This wrapper is probably the source for the stories of 1952 cards being found in 1953 wax packs. Conversely, Topps did sometimes use older wrappers for newer product, a practice they followed into at least the mid-1970's. There would have been returns for the highs from the wholesale jobbers, consolidators and direct accounts as well and Topps likely had a bunch that never left the warehouse floor.

Topps kept their set counts lower in the following years and didn't issue a set as large as the 52's until 1957, when they matched its 407 cards, albeit without what we would call high numbers today. That was partially due to lack of players under contract prior to the acquisition of Bowman in 1956 and there may have been some gun shyness involved as well. The first set to really go all in again on high numbers would be issued in 1958, as baseball expanded to California, and they continued through 1972 (or 1973, sort of) in patterns that sometimes defy logic. Topps attempted to smooth out the availability issue of the highs in 1968 and '69 but 1970-72 resulted in traditional high numbers being marketed before they went to issuing all their cards at once following a phase-in during 1973. But make no mistake about it, the 1952 high numbers are the daddy of them all, in large part due what is assuredly a Sy Berger tall tale detailing how a couple truckloads of high numbers were loaded from Topps HQ on a garbage scow one day in 1960 or so, after various creative attempts to dispose of same failed, and towed out to the Atlantic Bight, where they became fish food.

Topps certainly could have hired a barge to dump their stock as there were ample dock facilities available to them at Bush Terminal, which commands a large stretch of the Brooklyn waterfront along Gowanus Bay.  There are, to my mind, several problems with the barge story though:

1) Topps would never have spent money to discard something they could have just tossed out or flash fried in the incinerator at Bush Terminal back in the day.

2) The excess 1952 inventory was probably not located at Topps HQ in Bush Terminal. rather, it probably ended up at one of their historical Brooklyn locations, all still in use as storage and distribution facilities during the Swingin' Sixties.  I would think either 60 Broadway (the Gretsch Building) or 383 3rd Avenue (the old Shapiro Candy plant) would suffice for such purposes and then whatever was left just sat around for several years until it was either rediscovered or someone came up with a plan, to wit:

3) Card Collectors Company, Topps preferred secondary selling market for leftovers and the like, and operated by Woody Gelman, ran out of the '52 highs by the late 50's.  They then restocked sometime after 1960 and were selling singles and full high number runs through at least 1968. That many highs being sold for that long?  They would have to come from Topps in such quantity, especially as they were already known to be hard to find by the time of the alleged dumping at sea.

4) Topps never tossed anything unless they had to.  They would just put it out in Fun Packs, or some other type of setup.  The one set I am aware of them dumping is the 1968 B&W Football Team cards, which look more and more to me  like they had to be destroyed on orders from the NFL.

So I call shenanigans on the barge story!

This all got me curious about the potential universe of 1952 semi highs and highs, so I did a canvass of eBay on October 4, 2019 which yielded some interesting figures.  Here's the raw data:

There were between 25 and 107 of any individual semi high's available on the 'bay on October 4, vs. 7 to 60 of the highs. The decadal tranches reveal cards #251-270 were the extra prints in the semi-highs (seems like it should be four of them for every three between #271-310 but oddly it's not that smooth from the derived counts):


It further works out to 55 semi highs on average compared to 28 highs (I accounted for the DP's of #311, #312 and #313), or almost exactly a 2:1 ratio. If you factor three missing cards in the 401-407 range, that comes up to about 285 on an estimated count extrapolated out to ten cards in the tranche BTW. Furthermore, the PSA pop reports show several hundred of each high number have been slabbed. I would think there is a bit of a skew toward a higher percentage of high numbers being listed on Ebay vs. semi-highs and also in the pop reports but the 1952 highs can certainly be found without much of a problem. Your experience may vary, especially if you want a certain card in a certain condition, but they are out there.

Popularity certainly seems to be a big driver with the highs.  They were hard to find in 1952, could eventually be found at Card Collectors Company (or more accurately "Sam Rosen" prior to Woody's Step Father passing away on New Year's Eve 1958) and eventually saw a rebirth in the 60's at CCC.  Woody really amped up the CCC presence once he took over in 1959 and was a big advertiser in The Sporting News, Boys Life and other publications, raising visibility of the hobby and the 1952 high numbers. The other thing driving them could also be appearance-they look super, at least to me.