Well Friend o'the Archive Lonnie Cummins has done it again-he's sent along a penny tab version of the circa 1949-50 Topps Sports Oddities, a Willard Mullin illustrated set much like the same year's Spalding Sports Show and where the one cent comic is linked to the five cent version known as Know Your Sports.
(10/29/20 NOTE: I don't know as much as I thought!  I have been advised the Sports Oddities/Know Your Sports are not by Mullin-artist is presently unknown.)

Here's what I know about these sepia colored comics; I'm a Willard Mullin fanatic, so will be going well off script in describing the first's historical background:

Spalding Sports Show is designated in the 1960 American Card Catalog as R414-1 and is thought to contain 25 subjects.  It's known on one cent wrapper reverses only (early Bazooka comics were affixed to the underside of the outer foil wrapper) and the illustrations first appeared in an annual promotional pamphlet issued by A.G. Spalding & Bros. in support of their sponsored program on NBC Radio.  There is a 1944 issue with a photo of Base Ruth on the cover: 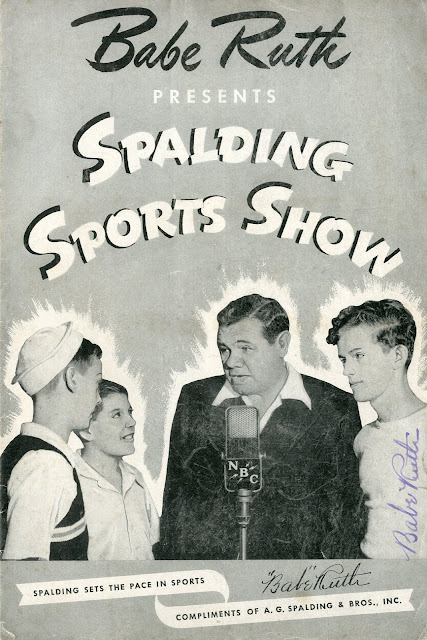 I believe that is the first of its kind as the year prior Spalding sponsored a show called "Baseball Quiz" that was hosted by the Babe. This Saturday morning kids show, which premiered in 1943, ran for five weeks or so in June and July before reappearing in late August and airing until just before Thanksgiving.  The show then returned on July 8, 1944 as "Here's Babe Ruth" but must have morphed into Spalding Sports Show at some point soon thereafter, most likely in the fall as the name was still unchanged in August --which is the latest I can track in '44-- and was off the air before Hallowe'en.

I'm not sure of the content in 1944's pamphlet but all of the issues after that year are Mullin tours-de-force. They featured a couple pages of Spalding equioment ads while the rest was all Willard.

In 1945 it wasn't only the pamphlet that got the full Mullin treatment; check out this killer newspaper ad: 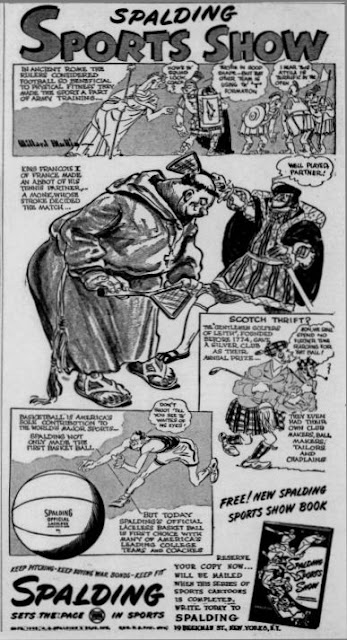 There were multiple versions of the ad as well; Mullin was quite prolific. Here's the actual 1945 issue, with a selfie of sorts: 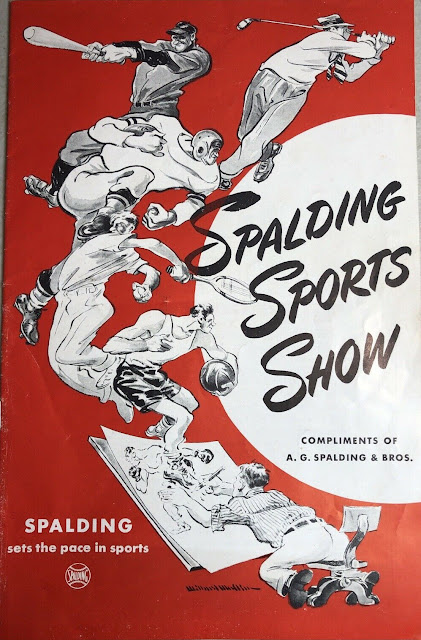 1946 brought more media ads (as did every year thereafter) and a new pamphlet: 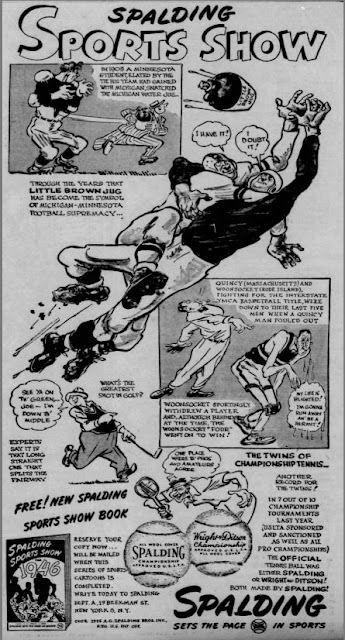 The cover is almost a study in noir: 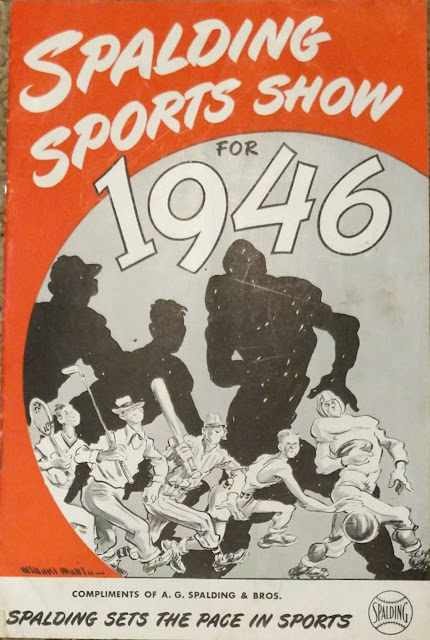 The 1945 and 1946 pamphlets are tough to find, no doubt quantities were limited by the war effort the first year and ongoing supply shortages the second. The '44 seems a bit easier, possibly because the Ruth connection raised retention rates but it's not exactly common.

1947 though, gave us this beauty, which set the visual pace going forward: 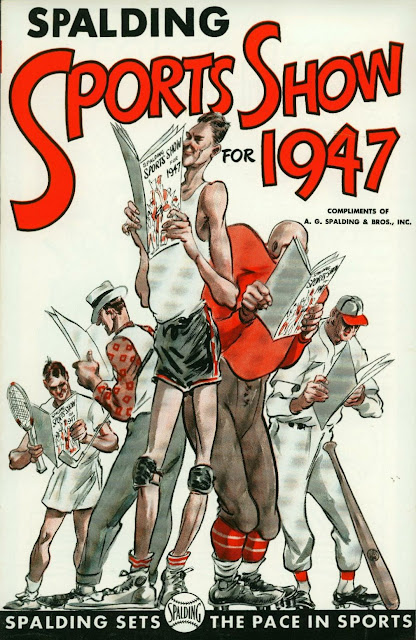 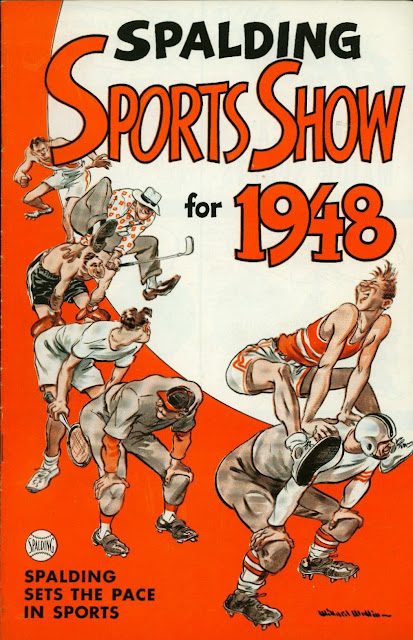 And then 1949 brought two different editions.  The first repeated the cover above but added sub brands Reach and Wright + Ditson to the cover text: 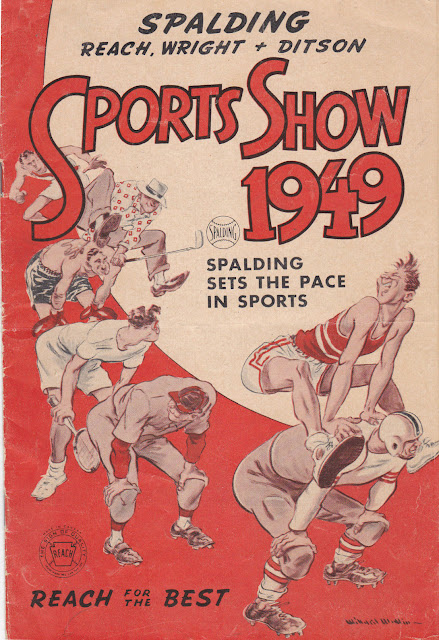 I have to think that came out at the tail end of the 1948-49 radio season.  Here' an interior shot where the resemblance to the forthcoming Topps comics is apparent: 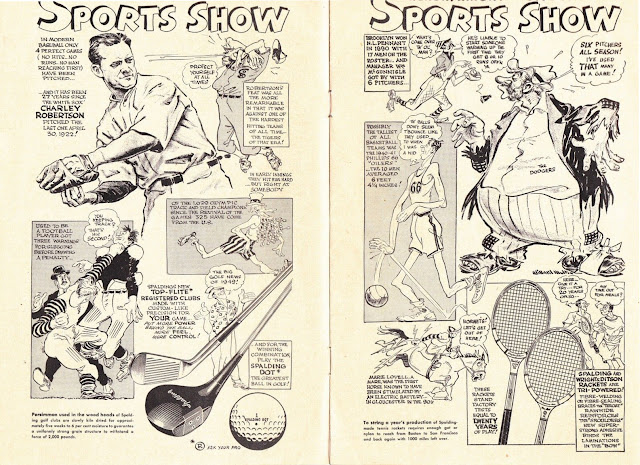 Things got back to normal on the cover again in June of '49 when print ads started appearing for this one; I'd say the radio season back then started roughly when kids got out of school for the summer. Mullin drew himself into this one: 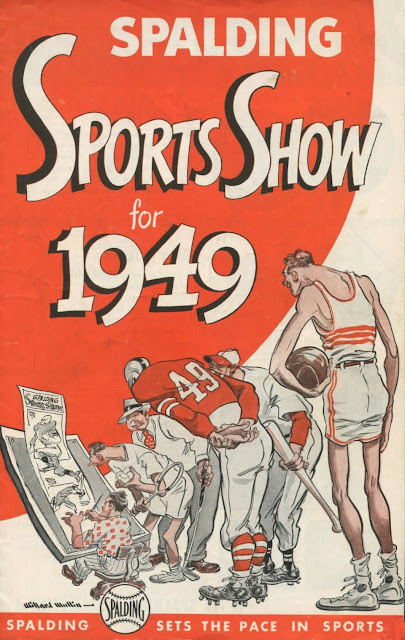 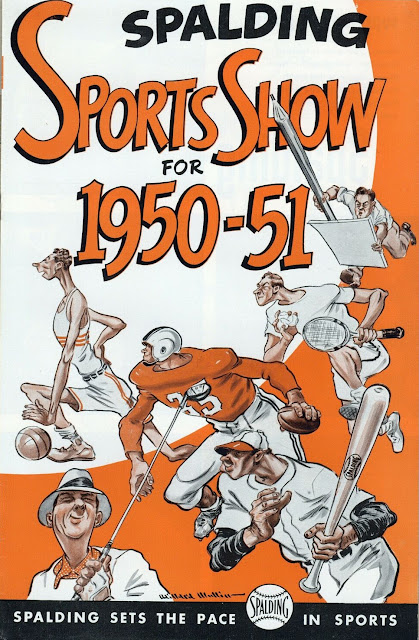 1951 continued the theme and you will note a store stamp on this example, plus another Mullin appearance. Great promo item, right? You can see why Topps licensed the artwork given the reach of the publication: 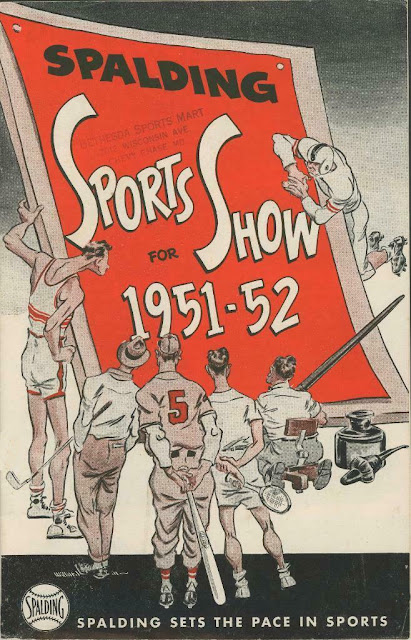 Then 1952 brought the end of the era with TV presumably killing the radio show and associated sponsorship off: 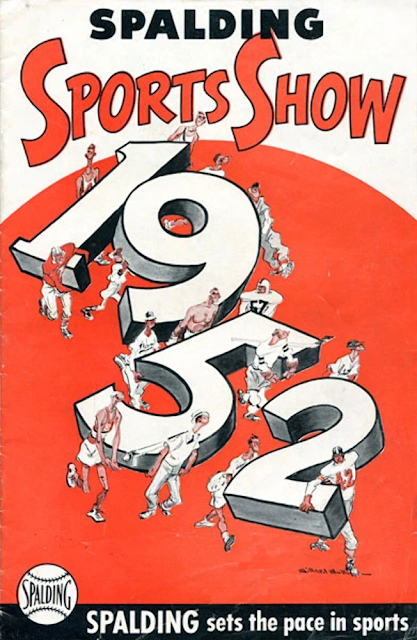 I should probably show a Spalding Sports Show comic or six after all that, sorry if you've seen these here before: 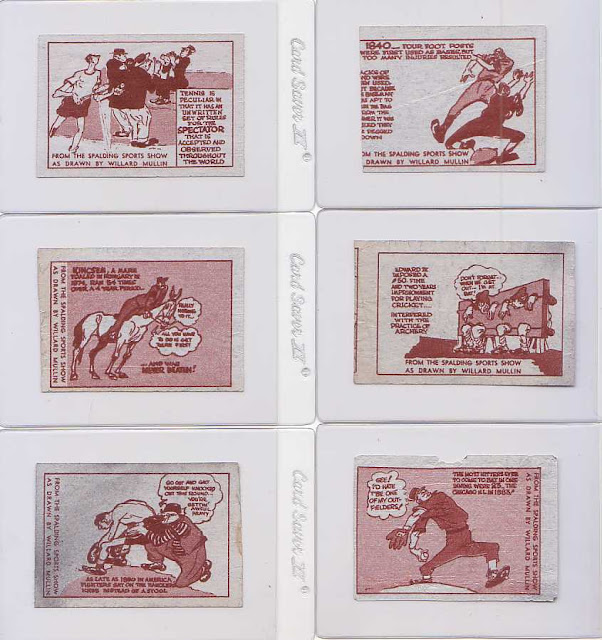 Sports Oddities may not have derived from the Spalding Sports Show pamphlet art as I suspect Topps just engaged Mullin directly. I have no idea if the set even has a name in one cent form, Jeff Shepherd christened it such years ago and I'm keeping it that way. The contrast on this scan from Worthpoint, via Lonnie, is turned way up but these are not as quite as dark as R414-1: 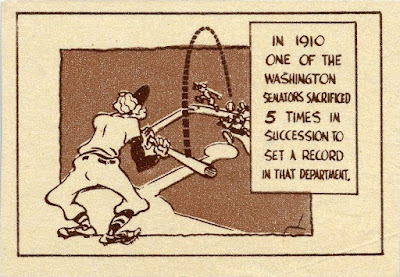 It was on the back of a wrapper like this: 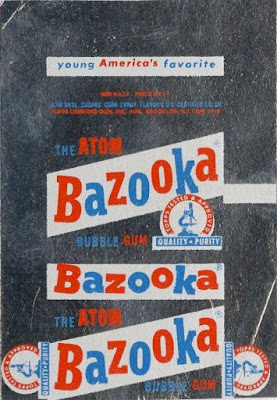 Topps used that Bazooka wrapper in 1949 and 1950 from what I know if, mixing in the white background behind "young America's favorite" with one that was solid. I believe these came after the Spalding Sports Show comics because that specific image appears on a five cent wrapper where the comic is called Know Your Sports.  It took Topps a year or so to realize you could market the same thing on the one and five cent comics without hurting sales, which is why I lean toward this set being issued after Spalding Sports Show.

Here's the big boy, with the one cent comic shown above repeated in the upper right corner: 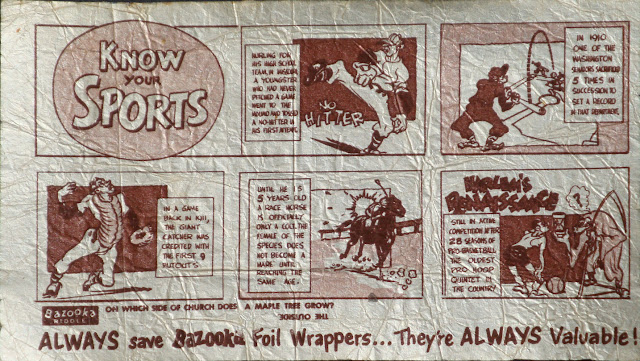 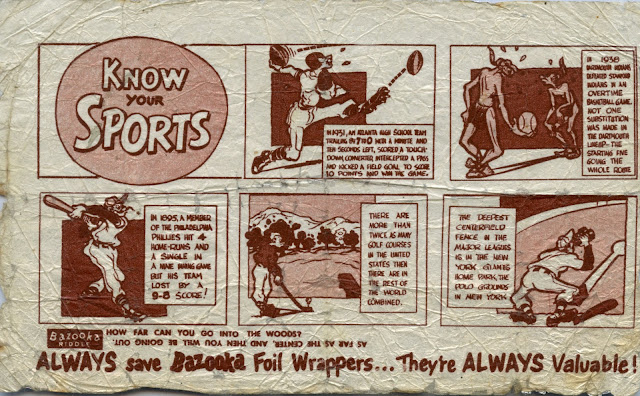 That last one came affixed to this wrapper: 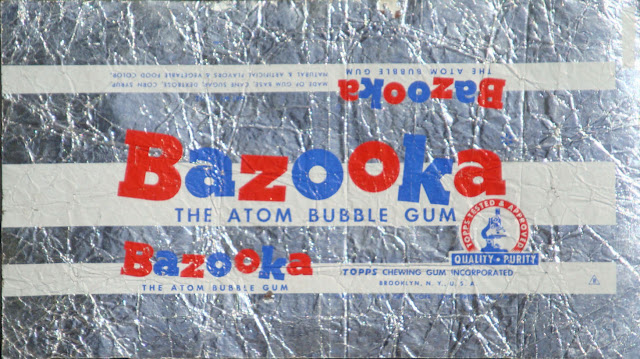 Here's a six pack of Sports Oddities penny tabs, half are found on the five cent wrappers above: 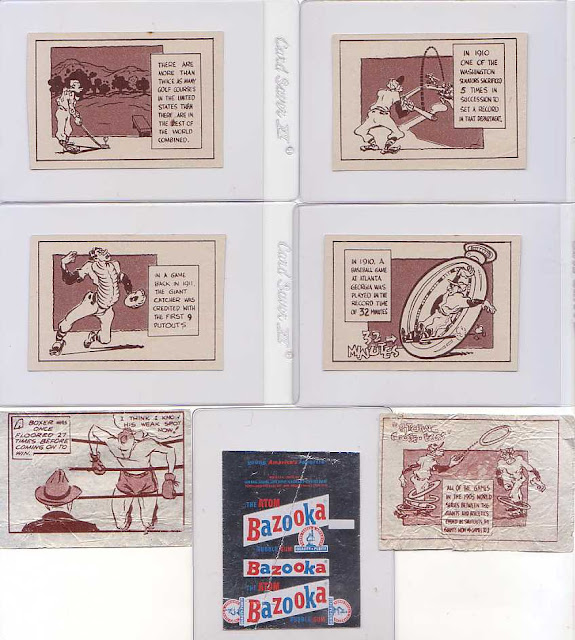 And here is the best one of all, scan courtesy of Mr. Cummins; I'm not sure it's by Mullin though: 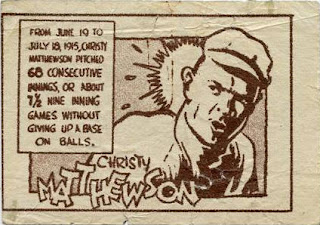 (UPDATE 9/21/20-I snagged a 1948 edition of the SSS after I published this post and this is the Matty; it was redrawn for some reason when Topps issued the comic.  Compare to the image below Matty, which has one of the Spalding Sports Show vignettes faithfully reproduced to the left of Shag Shaughnessy). 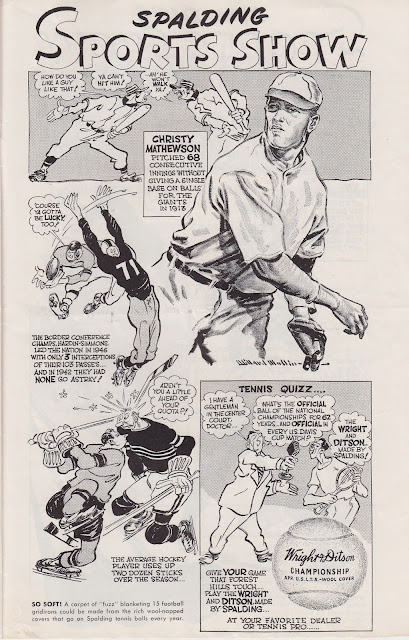 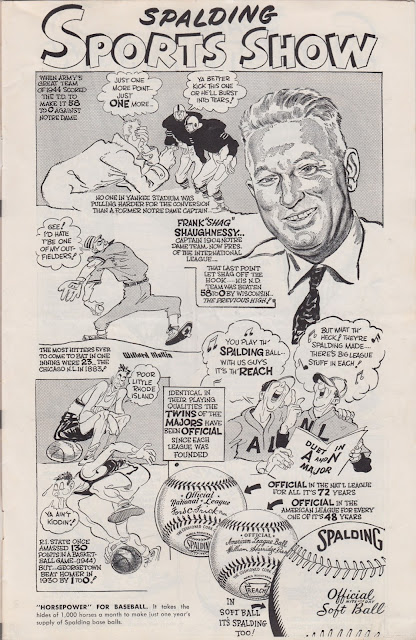 I think it's safe to say the checklist can be derived from a combination of large and small versions. I'll leave it at a visual checklist for now, which is a 14 count by my math.

These penny comics may also have been mixed in with another unnamed set dubbed Famous Events in the 1960 American Card Catalog and dubbed R411-4 by Burdick. There's two styles of these (the font along the bottom is different), so specifically dating this mess is almost impossible. At least one date repeats and it's highly doubtful all, or anything near 366 potential calendar days were issued: 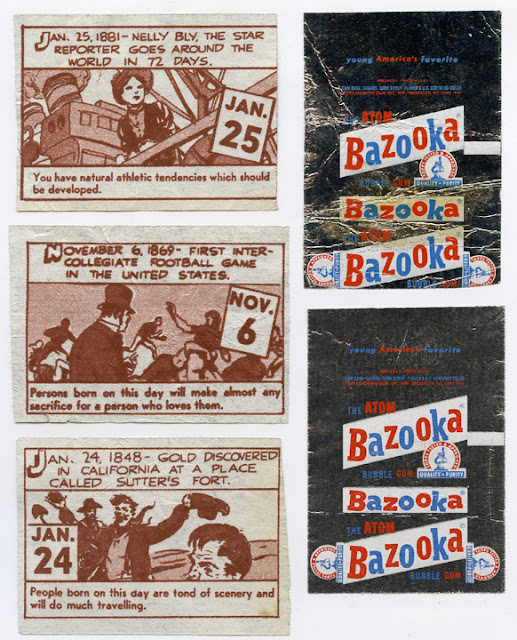 Sepia soon gave way to color on the penny comics but remained on and off on the five cent versions into about 1953; a purple shade was added for a short time as well but it's unclear how many series of comics were given this treatment.
Posted by toppcat at 8:00 AM