Time traveling back to the early days of TV today kids as we take look at Milton Berle, or more specifically, at an obscure Bowman novelty associated with him.

Berle got his start in vaudeville at a very young age and progressed through nightclubs and some forgettable movies in the early 1930's before parlaying a regular slot on the Rudy Vallee radio show into his own program in 1947.  A year later he got his break in televison on Texaco Star Theatre, where was named the permanent host in the fall of 1948, earning the well-deserved sobriquet Mr. Televison.  By 1952 he was the biggest TV star in the land and Bowman capitalized: 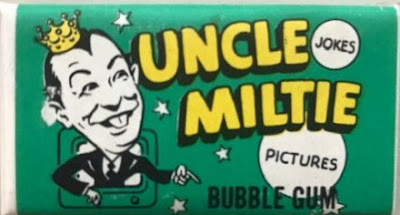 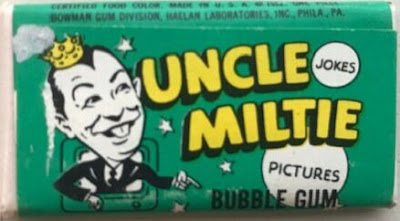 Uncle Miltie had artwork (fairly good in execution but occasionally crude in depiction) and a short joke printed on the inside of the white wrapper. Some jokes are not politically correct, which is no surprise as that's how things were back then and for several decades thereafter.

Jeff Allender's wonderful House of Checklists, lists 34 jokes (click through to his site for details) but I've found seven more, as noted below.  The set is obscure and examples are very hard to impossible to track down. I think the pack shown is one of only two known to exist and it would have sold for a penny at the time of issue.

Berle's show was on NBC and Bowman had a relationship with the broadcaster of course, issuing sets in 1952 and '53 showcasing the stars of the network.  Haelan Laboratories Inc. on the wrapper means Uncle Miltie could not have been issued prior to May of 1952 (the name change occurred on April 28) and I suspect it came out in the fall that year as the 1952-53 season kicked off.

The interior wrapper was where the action was, although the obverse design's pretty eye catching.  I can't actually find any issued examples to show but some original artwork was sold by Hake's about three years ago that certainly gives one the tenor of the set. First some paste-ups: 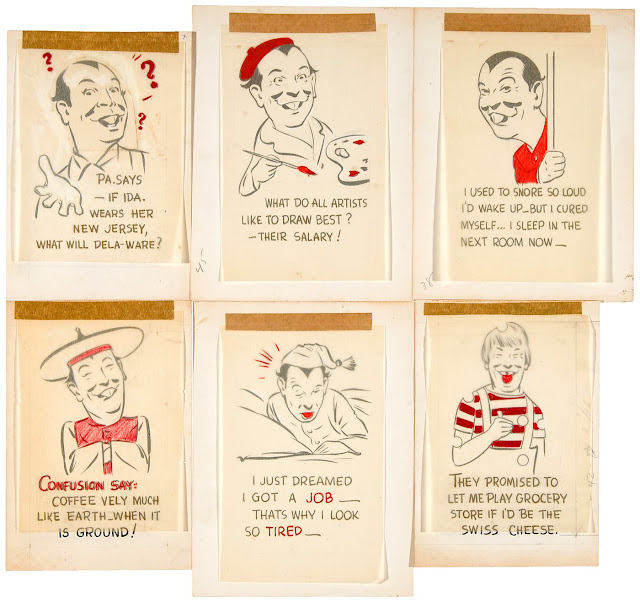 Told ya it could be politically incorrect!  Here is an original art piece from the same lot: 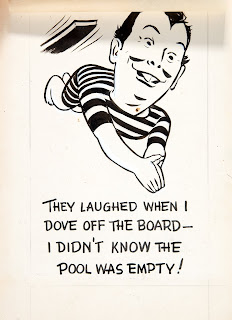 None of these are detailed over at the House of Checklists, so there's at least 41 different if all the pasteups became issued pieces (there is a pasteup of the diving board joke as well). I would think that's pretty close to a final number; Bazooka would often have 42 comics in a series and despite being a competitor's product it would not surprise me if that is the proper count for Uncle Miltie.