Some correspondence from Topps has presented itself of late on eBay and what better thing to do than cadge some scans and share the results here?!

First up we get a dunning letter from Joel Shorin, son of Topps executive Phil Shorin and who would one day run the company himself: 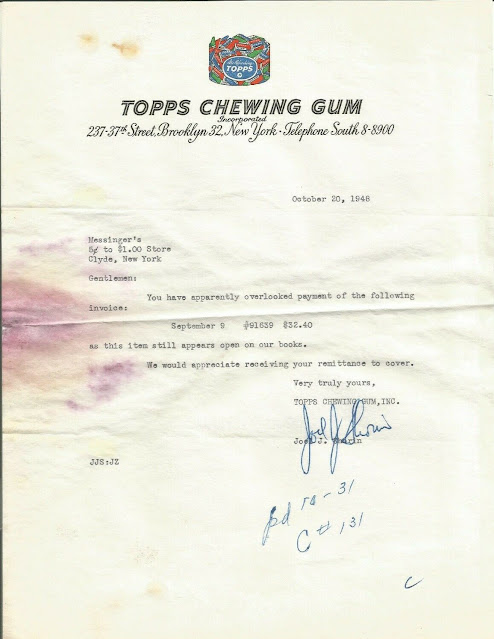 Messinger's Variety Store (or more properly 5¢ to $1.00) was a mainstay for a very long time on Glasgow Street in Clyde, New York where Scottish influence once held considerable sway, so much so that the town was named for the river in Scotland.  It served the small town on the former Erie Canal about ten miles south of Lake Ontario from 1936 to 2001, or in other initials from mid-FDR to early-W, which is about 65 years if you're counting.  Clyde itself prospered as a stop along the canal, which opened in 1825, but its population has hovered around 2,300 souls for quite a while it seems. Clearly a letter mailed there without a street address would make it to Messinger's without much fuss in 1948 (and probably 1998!).

Donald and Messinger his wife Thelma also had a variety store outpost in Williamson, New York until about 1974.  Here's a peek at the Clyde store's counter and candy racks from the Rochester Democrat & Chronicle on July 4, 1994: 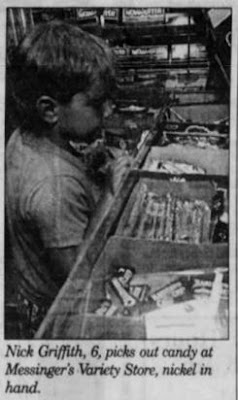 The Messingers promptly paid up by the way, Thelma must have been in charge of the books:

If the invoice for the order was sent on September 9th, Topps must have been very much on top of their receivables!  Check out this sweet Topps bank deposit stamp on the back of the the check:

Many old checks in the years before electronic clearinghouses would admonish people not to fold, spindle or mutilate them. Perhaps one reason for this was due to the hole-stamped method of noting the check had been cleared and cashed.

Things were far more relaxed ten years later when this little gem was sent out: 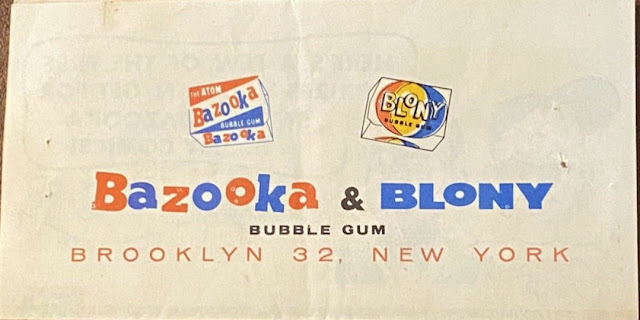 That's actually the Topps letterhead, circa (early) '58.  I say "early" 1958 as "The Atom" on the front of each Bazooka penny tab was replaced by "Topps" mid-year.  Blony was the province of Archie comics, to wit: 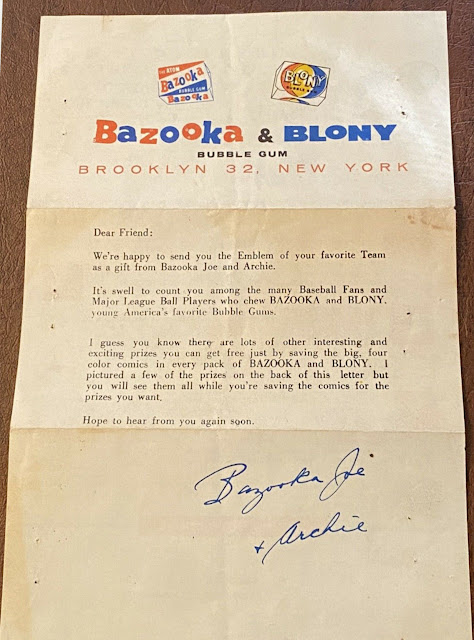 Yes, this rode along with a 1958 Topps Baseball Team Emblem premium! I covered those in February of 2010 and if you click through, you will see at least one 1958 pack insert promoting those had the new Bazooka gum tabs with "Topps" now prominent; perhaps as a preview or (more likely) already rolling out as Topps used up a supply of out-of-date letterhead.
Topps helpfully noted  on the flipside of this letter that several premiums could be yours for enough comics and/or change: 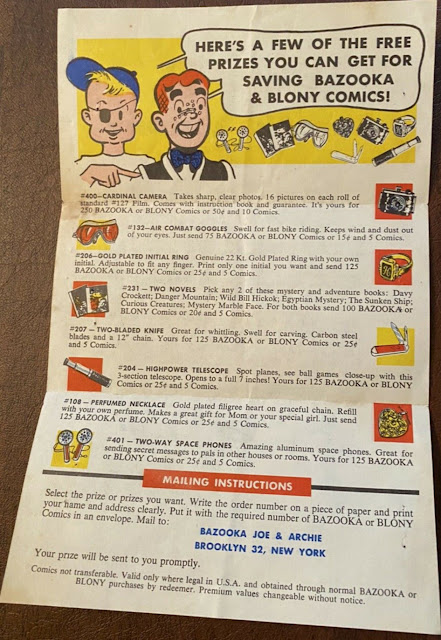 Those were pretty hefty buy-ins for the time and this seems like a direct marketing and audience survey form post-MLB stabbing westward as it took only a mere wrapper and SASE to get the original felt emblem premium.  They may have been burning off excessive stock of some premium items as well.
Is it just me or is e-mail just not as fun as postal letters?
Posted by toppcat at 8:00 AM