BFF o'the Archive Jeff Shepherd was nice enough to loan me some old tobacco journals a little while ago to pick through for Topps-related content and they did not disappoint. While I continue to search in vain for any American Leaf Tobacco Company ads (some mags were from the 30's), Bazooka and its early ad partners certainly were present and accounted for. I've included one a little further below I think many of you will like.

Topps took advantage of radio in advertising Topps Gum (which had a jingle I'm still searching for) and also Bazooka on the Abbott & Costello Show. I've shown this original piece before but it gives you the setup perfectly: 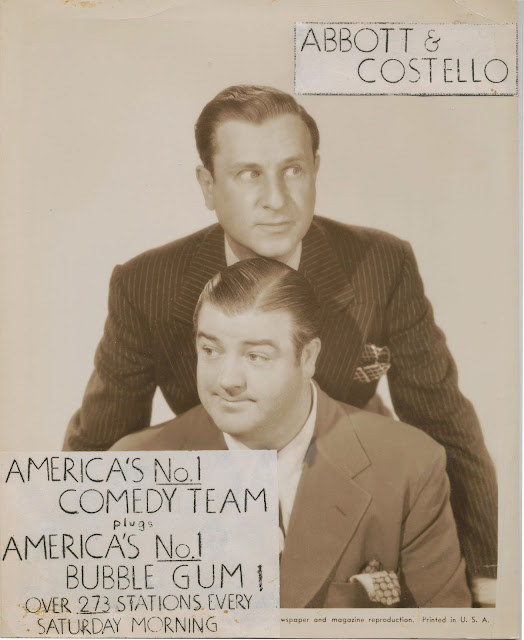 A&C had been on NBC Radio for a five year run before switching over to ABC in the fall of 1947.  A couple of months later they launched a Saturday morning show for the smaller fry and that is where Topps parked their radio ads for Bazooka.  Topps Gum was marketed to adults and would have been hawked on the traditional, evening show.

Both of their ABC shows are described in the references I have as "sustaining", which means they had no national sponsor but instead relied upon a little meager, often  local "spot" advertising or merely network promos to remain on the air.  Sustaining shows did not necesarily have long lifespans but the "plug" for Bazooka seems to indicate the Abbott & Costello Show had some national revenue generated via Topps buying "spot" advertising. Given that they aired their last children's episode on March 26, 1949, this ad from the April 2, 1949 edition of "The Tobacco Leaf" Topps must have been in at the kill: 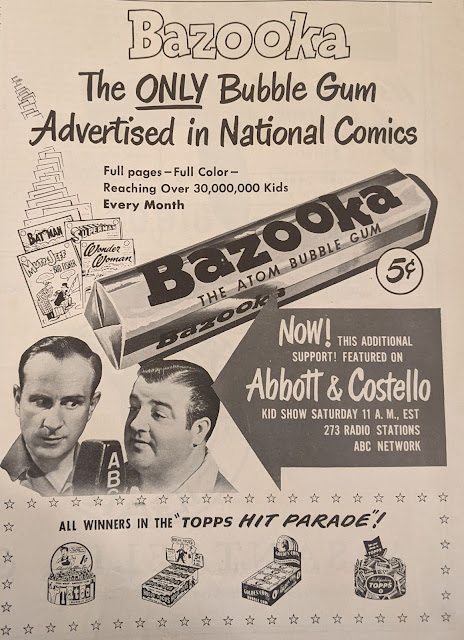 A&C's evening show only lasted about ten weeks after the Saturday show aired its final episode and television was about to change everybody's lives whether they liked it or not. I actually have a transcription disc of one Abbott & Costello radio show with a Bazooka plug but have no way to play it as it requires a special turntable that plays "inside-out" and no audio files have yet turned up on YouTube or the Internet Archive but I keep digging.

Topps was about to come around on the idea you could have multiple price points on a confectionery products but at the time the above ad ran, the penny Bazooka tabs we all knew and loved were not yet in the market.  That referenced DC advertising campaign was also widespread and lasted slightly over two years, running from mid-1948 to mid-1950.  These two ads were running in a couple of dozen DC titles at the same time the above one appeared: 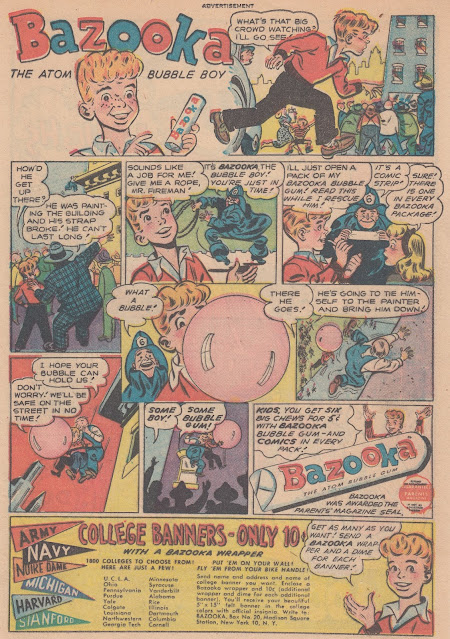 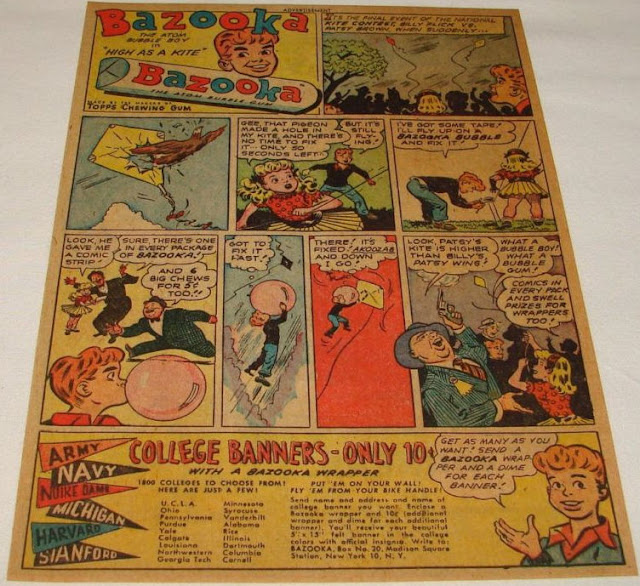 Yes, 1,800 colleges to choose from, meaning those pennants were printed on demand!

Abbott & Costello continued to make movies and of course had a syndicated TV show for two seasons running from 1952-54. Their best known routine is obviously "Who's on First?" but that's been played to death and I find this clip from the telly a lot funnier personally:

"Good night to everybody and good night Paterson, New Jersey!"

Considering that the NCAA has fewer than 1300 members currently, I'm amazed they have 1800 colleges to choose from in this offer.

Also, Madison Square refers to the original park, not the current building over Penn Station. New York 10 is the current 10010 zipcode, which is roughly bounded by 21 and 27 St, 6 Ave, and the East River.

Not sure but I suspect some schools have folded, although many are still around; some are now universites instead of colleges. I think these were just prepared as needed, with no logos, just default lettering. Topps premium certificates for jobbers and retailers, as near as I can tell, start at 60 Broadway (first Topps commercial office) in Brooklyn on the earliest examples, then 134 Broadway (second commercial office, also in Brooklyn) in the early 40's then generally switch to NY 11 at some point around 1944-45 then on to NY 20 until they settle in at Bush Terminal although they seemed to lag by 18-24 months or so (as above); they must have had sheafs of certificates printed up used until a certain supply ran out.

I've never seen on for 582 Montgomery Street, which was the first Topps office address (Phil Shorin's house in Brooklyn, prior to start of production) and am not even sure one would exist but I guess it's theoretically possible.

Some old codes still showed up later on occasion-that must have depended upon the fulfillment house's location, just like on the Bazooka Joe mailer above. I like how the old postal codes were captured in ZIP Codes.