A Killing In Milling

I was lucky enough to pick up a Spearmint Topps Gum five-cent box recently which not only complements my Peppermint pack but also allowed me to glean some additional information as to how Topps provided confectionery products to the U.S. Government for various military field rations.

The original field rations from Topps were one cent gum tabs, some slightly in differing size from the retail Topps Gum tabs that they made their name on before and after World World 2. When Topps Gum went from a traditional "flat" chew to a "chiclet" style around 1950 (once Bazooka penny tabs proved their staying power) some similarly sized one cent packs also held two of their flagship's chiclet-style, candy-coated "nuggets" (wafers?).  These also seem to have been used for field rations into the 1950's. See here for the deets.

Topps also introduced a nickel pack of this smaller, minty gum in the 1950's, likely after they got keel-hauled in court by the American Chicle Company for ripping off the look and style of not only Chiclets packaging but also that of Clorets. The pack was sized to fit into cigarette vending machines (remember the Shorin family's fortune was originally built on tobacco) but it could also handily nestle in with various field rations in each kit: 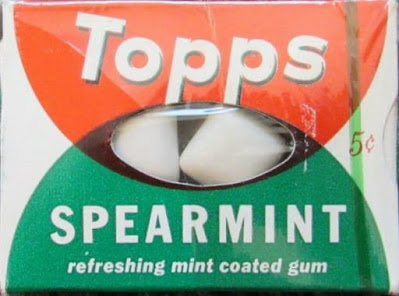 There's been anecdotal evidence of these being military ration components previously (alluded to when I bought my Peppermint pack a few years ago) but this one comes with a pedigree: 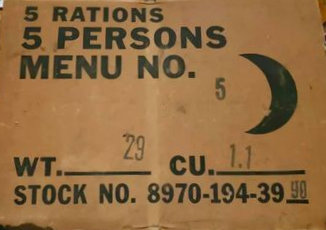 Not sure what all of that means (maybe no caffeine is indicated by the crescent moon?) but it's like a Topps commodity code on steroids!  Here's the all important box bottom, with more details: 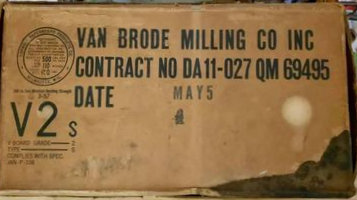 Van Brode Milling was a packager and distributor of military rations for years as near as I can determine and they had a subsidiary that seems to have perfected the plastic spork. The auction listing describes the rations as being Viernam-era and I e-mailed the seller for some details.  He came back with these carton scans but not a year of issue and that manufacturing date under the burst test information sure looks like March 1957 to me, although it's hard to read.
Multiples of five seem to be a US military ration "thing" and there some that mention "tens" as well.  Anyone out there familiar? 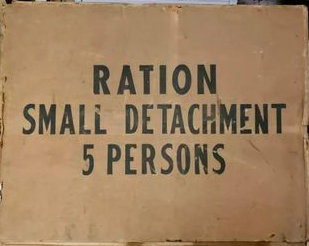 What is odd to me is that the pricing remains on the Topps packaging.  It seems like it doesn't belong but as we have learned with Topps, the unexpected is very much expected!