An interesting short article crossed my transom the other day and while I have managed to misplace the name of whoever provided it (possibly Lonnie Cummins or Keith Olbermann, sorry that I lost the handle gents!) it makes for an interesting read, despite its brevity:

I found several other sources for the article and all were dated May 4, 1949, so the suit against Leaf Brands by 272 players was filed smack dab in the midst of the baseball (and baseball card) season.

The Leaf Baseball set of 1948-49 defies easy conclusions.  98 cards were issued in skip-numbered fashion, ending at #168. 49 cards are far easier to find than the other 49, which are fiendishly difficult and could even be considered infamous for their scarcity. The biographical detials on the cards make it clear the set came out in 1949 but cards from both the easy and difficult sections can be found with a 1948 copyright or a 1949 (but not both, there's no 1948/49 variants).

Here's a card with a 1948 copyright, detailing Hermanski's 1948 season; there is a version of this card without the last letter of Hermanski's last name that is scarce and expensive and he's a perfect mataphor for this set, which had very little quality control but some really bizarre color arrays: 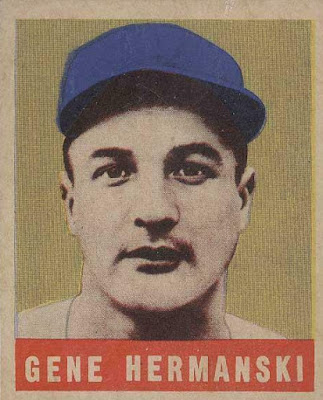 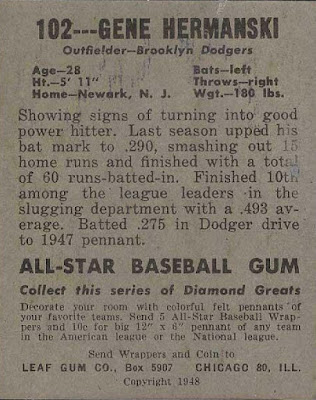 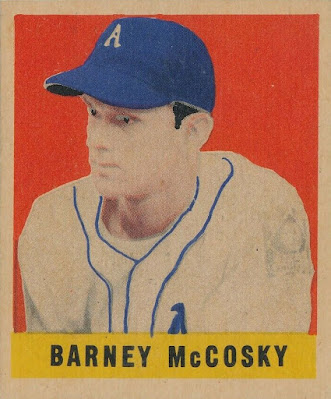 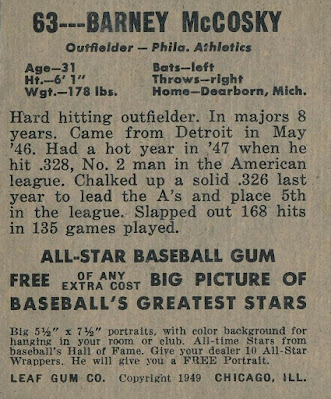 There is no real cohesion between 1948 or 1949 copyrights and the various short prints scattered throughout the issue, it's a real mish-mash. The set is a riotous mess: there's print errors, color mishaps and the whole thing looks like it was designed by a fifth grader, but it's loaded with Hall of Famers and very expensive cards, including rookies of Jackie Robinson and Satchel Paige. It's an important set in the scheme of hobby things.

Getting back to the suit, the six named players are in both the 1948-49 Leaf and Bowman sets:

The interesting plaintiff to me is Buddy Rosar, who is a short print in the Leaf set. If you need a reason for half the set to be short printed in the extreme, a lawsuit or restraining order vs. Leaf could be the reason.

Two other things that jump out at me from the article:

1) The inclusion of PCL players in the suit.  I think this indicates the Bowman PCL set had already been issued by the time the suit was filed, seemingly in early May. If not, it was certianly something that was imminent.  Was Leaf planning to include PCL players? It might explain how they planned to fill in some numbering gaps but I'm not sure of any impetus other than that Bowman was signing up Coast League players.  The "open" classification for the PCL wasn't granted until 1952 so that wasn't the key factor but the league did draw well in 1948, so maybe it was just related to natural expansion of distribution to the west coast.

2) Jack Bendon, who may have been an agent of Capital Sales on behalf of Leaf, was domiciled in Philadelphia.  There is a strong connection to that city among the three 1951 Topps Major League All Stars that are extreme short prints (and key postwar rarities) which were likely never issued in packs.) Of those three, Konstanty and Roberts were Phillies and Stanky was born in Philly. I assume Bowman, also domiciled there, was hyper-vigilant and possibly assisted the plaintiffs in the Leaf suit.

City of Brotherly Love?  Not when it came to Bowman and their competitors!