Continuing on from last week's post today, which you may recall featured some recycled Magic Funny Fortunes gags that were run up the flagpole by Topps when the original Bazooka Joe's drawn by Wesley Morse were petering out in the early 80's.  Morse died in 1963 but had created so many strips for Topps in ten years time that they lasted almost another twenty after his passing!

But run out they did and Topps, between the lack of new material and a desire to get a little hipper, had to find a new artist for the strip.  They eventually chose Howard Cruse and his strips began around 1983 but before that several "feature-style" comics were launched as replacements.  One of them ripped off another old Topps issue, 1961's Crazy Cards.  Check out this Unreal People strip (courtesy of Lonnie Cummins, as are all the others shown here): 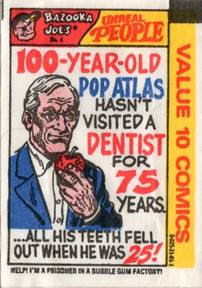 And now compare it to the original Crazy Card (by Wally Wood no less): 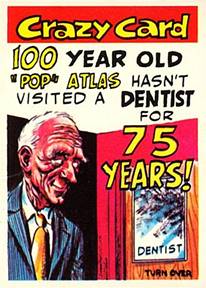 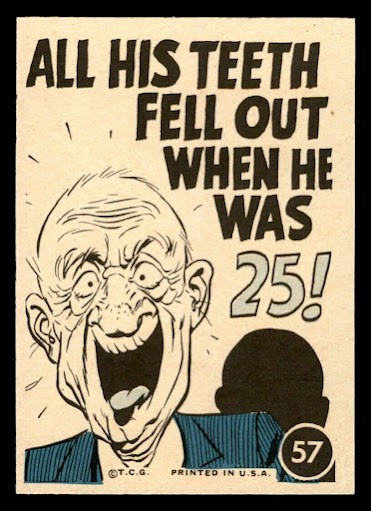 Same exact gag!  Not sure why the art wasn't reused, maybe Topps was trying out artists?

We also got some more ersatz Joe action with Rotten Riddles: 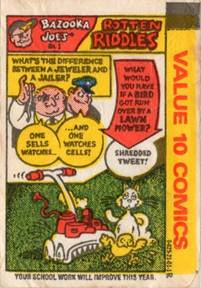 I'll bet that "fortune" would have been a real bummer to some 9 year old kid in 1981! The fortunes may have improved with the Dumb Jokes subset but the gags did not: 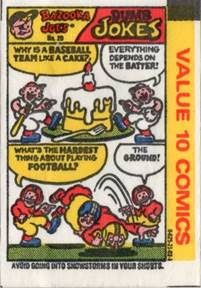 Lonnie ciphered that that particular football gag appeared in 1970's Funny L'il Joke Books and I'd wager many others in the the Dumb Jokes sequence did as well. 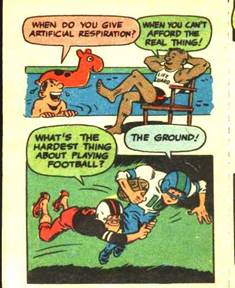 What I don't get though is why Topps didn't just recycle old Joes as they were waiting on Howard Cruse?  They did it in 1981 with recycled strips from 1977 according to the most fabulous bazookajoecomics.com so why not keep going?  The last "new" Bazooka Joe strips look to have been issued in 1980 so surely a reissue of older strips for another year or two would have been a cakewalk.

Two other features were mixed in during this period. Little Creeps, which seems like it was a standalone set from Hallowe'en a couple of years prior, may not have been issued that way and instead may have just been mixed in with some of these.  Or it was a reissue; I'm trying to figure that one out still.

Then there were also strips of Knock-Knocks: 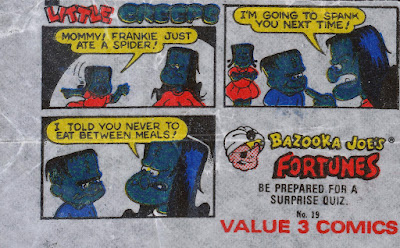 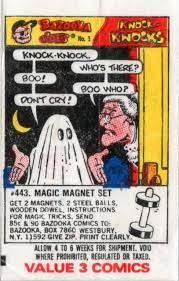 There was a lot of artwork created for these interlocking issues, 218 including a kind of reissue of 52 of them! They span the 1981-82 period "Between the Joes" quite nicely but also served to give notice things were changing. There's a mix of types within each release, which look to have occurred every 4-6 months or so based upon the volume of comics.

There are 3 comic and 10 comic valuations but it's not even as there's far more 10's; I'm not sure which was first but these seem to follow a different kind of numbering and release scheme than the vintage strips did.

On a semi-related note I got a ten pack of Bazooka in my stocking this year and am happy to confirm Joe lives! 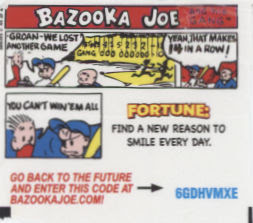 I went to bazookajoe.com to see what was linked and was met with a choice between two paths, one for kids and one for "adults".  I chose the latter (the former looks like it was designed for five year olds) and that s what I have put as the click through link-check it out!
Posted by toppcat at 8:00 AM