More 1952 Bowman extension set action campers!  Today's quarry is Chris Van Cuyk, who toiled quite unspectacularly for the Brooklyn Dodgers over a three year period from 1950-52. 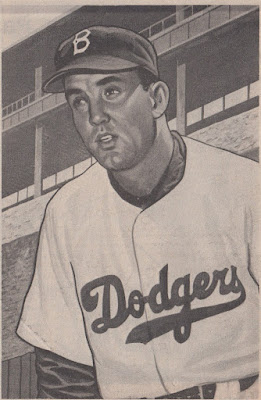 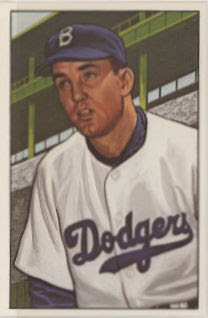 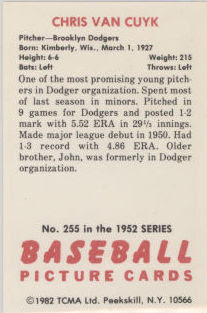 The neat thing is his brother Johnny pitched from 1947-49 for the Dodgers, so the Van Cuyk brothers managed 6 consecutive years of big league activity between them, albeit sporadically; John's major league career was even more nondescript than Chris's.  Take a look:
Johnny
1947: 2 Games 5.40 ERA
1948: 3 Games 3.60 ERA
1949: 2 Games 9.00 ERA
Chris
1950: 12 Games 4.86 ERA
1951: 9 Games 5.52 ERA
1952: 23 Games 5.16 ERA
Johnny's major league career ended after a mere 10.1 innings pitched and resulted in no decisions at all. As you can imagine he was in the minors most of those three seasons, all with AAA Montreal and with the exception of 1947, all quite meh. He had debuted in 1940 with Appleton in the D-level Wisconsin State League. After the 1941 season he was in the US Army through 1945 and then picked things up again with Fort Worth in the Texas League for 1946. He spent 1950 and 1951 with St. Paul (the Dodgers other AAA team) before heading to the open classification PCL for two seasons with Oakland before hanging up his spikes.
Chris, a flamethrower, managed a 7-11 record record in the bigs across 160.1 innings and his professional debut came in 1946 with Cambridge in the D-level Eastern Shore League, after a hitch in the Navy. He returned in 1947 then moved up to Fort Worth for two seasons and then put together a stellar beginning to the season there before the Dodgers called him up for his debut on July 16, 1950.  His career highlight was probably getting four hits in one game, on a day when the Dodgers exploded for 15 runs in the first inning on May 21, 1952, sending nineteen (!) men to the plate against Ewell Blackwell and a parade of increasingly hapless Reds pitchers. Van Cuyk registered two hits in the first frame alone and picked up the win in a 19-1 blowout.
You have to wonder if that caught the attention of the folks at Bowman but they may have been stymied by his being a Topps signee that season and he's #53 in the landmark 1952 set.  This might be the best centering you will see of his Topps card, it's often found horribly miscut: 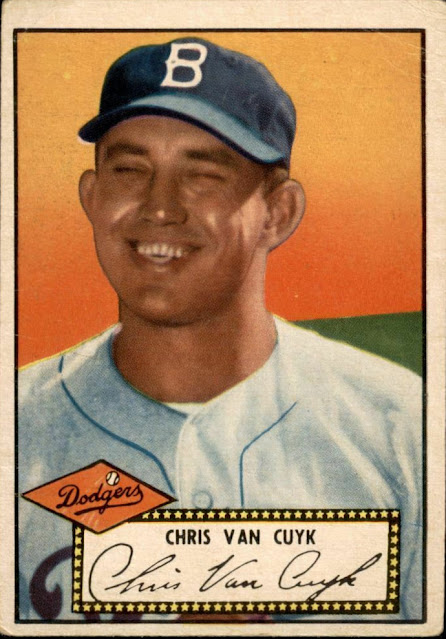 At a guess Bowman thought his Topps rights were not exclusive (or perhaps expiring) and was planning his high series card but he tossed his last game in the majors on August 15th. He followed Johnny's path to St. Paul in 1953 and then Oakland in 1954-55 but I don't think the brothers ever played together despite their affinity for being on the same teams throughout their careers.

Chris wore #25 with the Dodgers and I had hoped he inherited his brother's number but alas, he did not as Johnny wore nos. 37 and 43 in his cups o'coffee.   Johnny never made it to a Topps or Bowman card but his PCL stint got him a 1953 Mother's Cookies appearance: 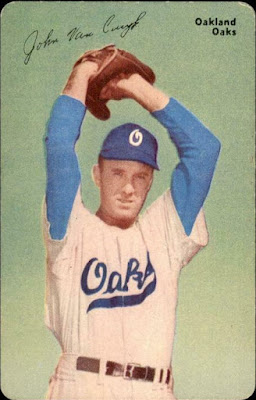 Save for an alleged  minor league card in 1949 (and also possibly a 1950) when he was with Fort Worth that I'm struggling to find information on, his '52 Topps was the only appearance Chris made during his career. Pretty good way to have only one nationally issued card!