Before Topps issued their 1959 Bazooka baseball and football box back cards (referred to in the hobby as package design, or PD cards) they came out with a couple of very primitive cutout sets on the backs of their larger, 25 piece boxes.  An important part of Topps' marketing and sales strategy, the 25 piece "party box"  is thought to have debuted circa 1955-56.An early box back, thought to be the first of three issues featuring irregular looking cutouts, i.e. not cards, is entitled American Defenders, and featured three cutouts per box: 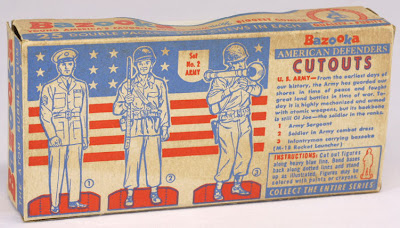 The bazooka is a nice touch!  I am not positive as to set length, possibly it was four panels, as one for each branch of the service would be appropriate.  The cardboard looks to be of the older style Topps used in the mid 50's and I would think this set could have been on the very first party boxes as Topps was very much attuned to providing value for money as part of their marketing.

Dating of this set of seven looks be be 1957-58.  Topps would return over and over again to assemble-it-yourself airplanes in the ensuing decades.  This set, unlike the previous, actually has an ACC number, which is R707-3.  Burdick, instead of grouping cards by manufacturer, would often have headings for an issuer's thematically linked cards, such as airplanes and that is where this set is pegged.

We are left with one more similar set, probably issued after the baseball and football cards of 1959, featuring six Models of U.S. Space Missiles. 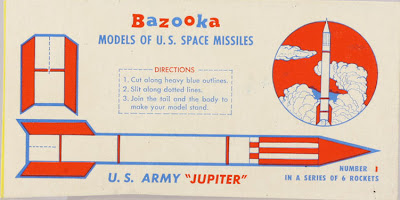 I would guess early 60's for this set, although a Jupiter rocket carried aloft a satellite for the first time in January 1958 and it's possible this set is from that year.  Dating of these issues is difficult as there are incomplete checklists known (at least to me) which makes it hard to determine what year a particular piece of hardware was first made.

You can view examples from each set here at Dan Calandriello's great online gallery.  Thanks to Jeff Shepherd for the scans above.
Posted by toppcat at 2:52 PM