Fireworks of A Different Sort

Sometime in the late 1940's or early 1950's, Topps began transitioning their "changemaker" Topps penny gum tabs into a product produced for U.S. Military field rations as Bazooka began taking off.  The production line for the gum tabs looks like it was changed to manufacture Tatoo beginning in 1948 and also various other Tattoo issues well into the 1960's.  This is the same production line that caused a rip to the wrapper during production.

Topps then attempted a line of Chiclets style gum, originally in Peppermint and Spearmint flavors from what I have seen but was destined to lose two court battles with the American Chicle Company and the strategy was abandoned.  The also introduced a line of what were probably fruit-flavored, candy coated gum pieces (or nuggets) called Block Buster: 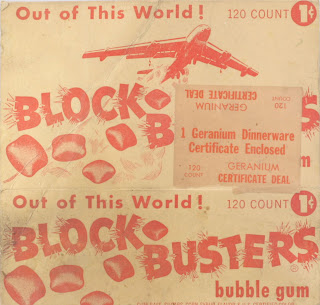 I'm not sure of the pack configuration but would guess either one large nugget per penny pack or maybe 2 in a small, box type configuration.  The Geranium Premium offer for retailers may help date the issue; we'll get back to that in a minute.

The side panel shows this was a product Topps was aiming at kids-the Bazooka logo and reference is a dead giveway: 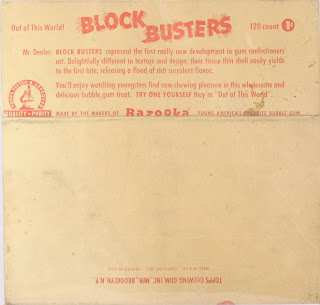 The style of box is definitely older; the quality of cardboard is not up to what Topps would be using by 1957 or '58.  There is a Topps premium certificate referencing a Block Buster Chef's Knife with a  September 1952 expiration date that I have to think was tied to Block Busters.  This would seem to give a late 1951 or early 1952 start date for production: 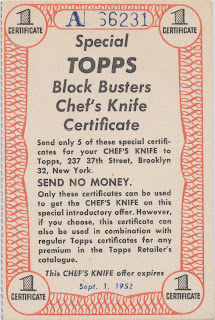 However, since this is Topps, it is a bit more complicated than that.  Here is a Geranium Chinaware certificate that expires January 1, 1956: 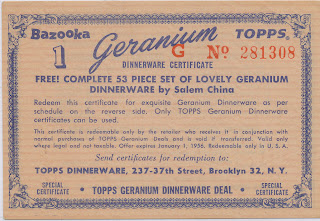 Topps probably had a warehouse full of this stuff and was slowly disbursing it to their retailers.  Given all this, I would estimate that Block Busters was marketed somewhere between 1951 and 1955 and did not catch on as Topps would have hoped.  However, in 1972 Topps would revive the product for another brief run:

I was eleven years old in 1972 and do not ever recall seeing this gum being sold.  Does anyone out there on the World Wide Web recall ever seeing the original version?
Posted by toppcat at 3:39 PM