Topps was looking for different paths to success with their trading cards in 1951.  They had mixed results with the Baseball Candy issues that year while Magic Football, given that it was four years before another pigskin product was issued, seems a likely money loser for the firm.  The non-sport issues generally ran to sequels (Animals of the World, succeeding Bring 'Em Back Alive) and "stamps" printed on the nickel Bazooka gum stiffeners) and it has occurred to me that the Topps may not have been flush with cash in '51. One set however, does stand out a bit: Ringside.

Assigned an ACC catalog number of R411 by Jefferson Burdick, Ringside was issued in two series of 48 in 1951 and featured boxers, mostly very well known and a handful of wrestlers. Measuring 2 1/16" x 2 15/16" the cards measured almost a half inch taller than the Animals of The World cards, the larger size Ringside cards were probably issued after Topps switched to a new printer following a host of difficulties with the finish on the Red and Blue Back cards issued with Baseball Candy.  These difficulties ultimately led to a lawsuit as the caramel issued with the baseball cards was being made rancid by the coating used on them.  This transition to a larger card also dovetails with Bowman's increase in size going into 1951.

According to Adam Warshaw, author of the annual America's Greatest Boxing Cards, available thru a link on his equally engaging website, the high numbers are about twice as difficult as the lows and the only major boxer missing from the set was Jack Dempsey.  The set did have Rocky Marciano though, an up-and-comer in the heavyweight division and about a year away from taking the belt from Jersey Joe Walcott (who had two cards in the set). 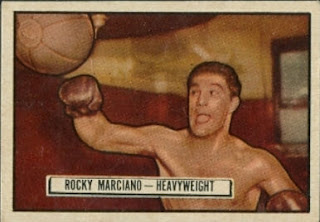 The card backs are typical of those issued by Topps at the time, as are the penny and nickel wrappers, all below: 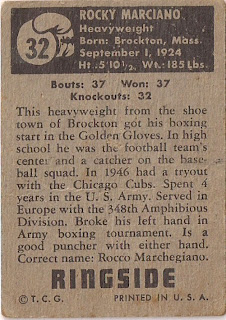 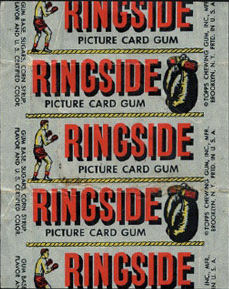 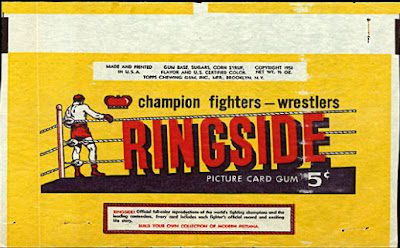 The last line, in red, on the nickel wrapper states "Build Your Own Collection of Modern Fistiania"!  Those nickel packs held panels, probably three in number, of two cards and a big stick of gum.

You can see the nubs that hold the panel together quite clearly in the middle,  here is a good look at a card separated from its partner: 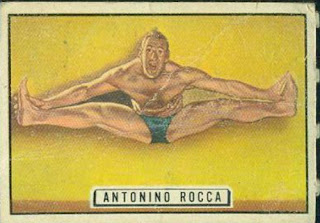 I'll not add any snarky comments and let that pose speak for itself......I think it highly probable that the Ringside panels came in Trading Card Guild cello packs as well but I am not sure if there is any conclusive evidence of that.  The box had some stellar graphics: 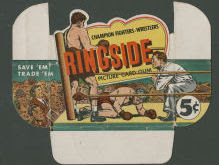 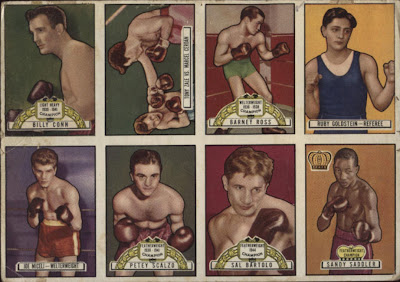 It's the back of the ad panel that is the real stunner though.  Replicating the box top graphics, this is one of the all time great Topps ad pieces IMHO: 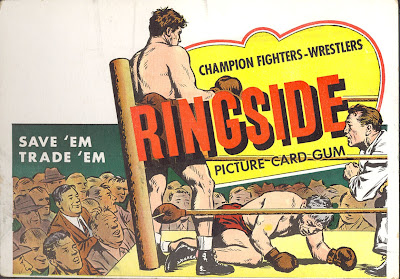 Individual cards are sometimes found with portions of the ad piece on the back; these are obviously hand cut but are sometimes referred to as "puzzle backs".
Posted by toppcat at 8:46 AM