More news of 1949 Topps products today buckaroos.  Just when I thought it was time to advance into the 50's, good ol' Jeff Shepherd sent along some scans of an item he just purchased, namely a 1949 version of the Meet The Presidents Game. Rather than this game being a Selchow & Righter product, the 1949 version is labeled as being manufactured by Topps for Toys:

The coins are bronze, not silver like the 1953 version: 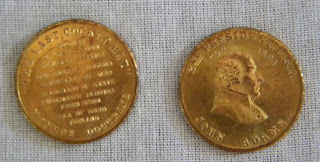 And since Dwight Eisenhower was just a well-revered US General in 1949, Harry Truman was the sitting president and occupied the last slot in the coin holder: 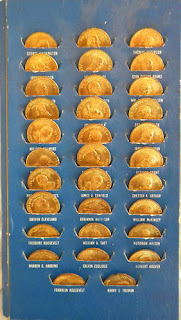 This is the only game produced by Topps for Toys and I wonder if it and the Golden Coin issue it is related to were timed for the inauguration.

If that isn't enough coin news for you, long time collector Bill Christensen has contacted me regarding the 1949 Play Coins of the World set, which is now regaining complexity after I thought I had sussed out the whole thing. We'll get to that soon but in 1949 Topps coins are proving to be quite vexing.
Posted by toppcat at 6:45 PM

Email ThisBlogThis!Share to TwitterShare to FacebookShare to Pinterest
Labels: Meet The Presidents Game, Topps For Toys