Fixated as I am on 1949 when it comes to Topps, I am going to dial the Wabac machine back another decade and land 'er where it really all began for the Shorin family's chewing gum empire.  After divesting themselves of the American Leaf Tobacco Company and American Gas Stations, Topps Chewing Gum was set up in 1938 as a partnership with nine members: Morris Shorin (Pater), Philip, Abram, Ira and Joseph (his four sons), Shorin Celia, Fay, Frances and Naomi Shorin (the four wives).  The inclusion of the women of the family (excepting the boys' mother Rebecca) is a bit surprising given the times but this was a surprising family in many ways.  In mid December of 1938, as near as I can figure it, Topps introduced five flavors of gum.  Four are well known: Peppermint, Spearmint, Cinnamon and Pepsin (I think).  The fifth, Ginger, made a brief appearance if surviving tabs and wrappers are any clue.

Here is a good look at the Ginger tab:

All but Pepsin are shown here: 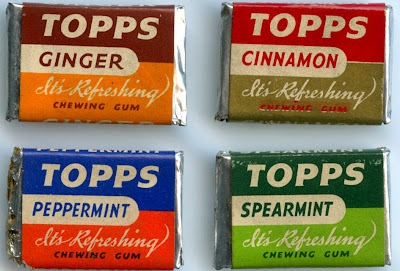 It's possible Pepsin was used to fill in for Ginger after the latter was pulled-still working on how that all went down. The backs are descriptive and also show just how embryonic the packaging was.  We know that Topps was focused on quality and value and a quick perusal of the back would be make that clear to a prospective consumer.  Also quite clear is the fact that New York City is shown as the place of manufacture, not Brooklyn: 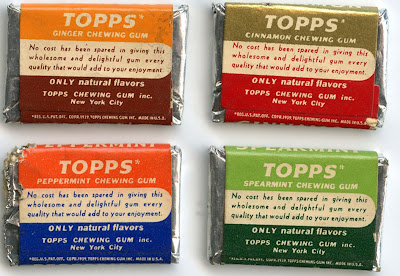 The little asterisk next to Topps leads down to the indicia which reads:

Topps had  filed for the trademark of their logo in 1946 but indicated the first use of the name occurred on December 13, 1938 (probably representing the first shipment of gum) but the copyright of the wrapper was contemporary. It seems to me that the product was shipped in '38 and designed to be sold in '39 as I can't see a 1938 version of the wrapper only being used for a couple of weeks. It then changed to a more Brooklyn-centric wrapper, probably as the production line really started cranking.  Here is a '39 Cinnamon wrapper showing the details of the switch: 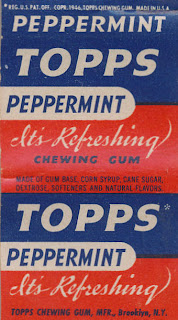 The label has lost the "only natural flavors" designation present on both '39 wrapper variants.  That is almost certainly because Topps was forced to use artificial softeners due to wartime supply problems.  It would take them a few years after World War 2 ended to get back to the use of pre-war ingredients but by that time Bazooka was already changing their business model.  I am not sure if a variant of the 1946 copyright wrapper exists trumpeting natural flavors once again but probably not.

Wow, I'd love to try some Ginger gum! Guess it didn't catch on?

Wabac is the ONLY way to spell it!