Well a trip to 1970-71 was planned today pilgrims, but as usual an investigation of one era has led to a different path.  That's OK, the fun part is in the journey!

One of the odd things about Topps is that their Bazooka issues from 1959-71 are given short shrift in the guides.  Prices for these cards suffer as they had to be cut from the boxes holding the pink stuff.  It's too bad because the photography on many of the cards is equal to or better than that on the regular issue Topps cards. From 1960 through 1967, Topps used a standardized back panel featuring three cards per box.  The set lengths would vary but always fall between 36 and 48 cards per year.  Many designs were similar and the better players had cards from year to year that require the use of a guide to determine specific vintage but it was a remarkably consistent run.  Then in 1968 the entire formula for issuing these sets changed.

I won't go all the way back to 1960 as I plan to look at the eight year run in detail someday, but want to examine the design of the boxes and sets through 1969 and will start with 1966, for reasons that will become clear in a moment.  I love the panels and boxes and this '66 is a prime example of how great these looked:

I had to steal that from the 707 Sportscards site but take a look under Kranepool.  You will note the absence of any indicia under the card.  Now take a look at this 1967 panel:

Under Bob Gibson there is a production or project code.  This is to be expected as Topps started using these in 1966 but that '67 box has a code from 1966:

That means the production commenced in 1966, even though the product was sold in 1967.  I would imagine the bigger and more expensive products were shipped earlier than the standard nickel packs as they would be warehoused somewhere for a bit before being shipped off to supermarkets and groceries, which were the main retail outlets for the Bazooka party boxes, as they are referred to in the trade.

That 1967 box was then end of the three card baseball panels until they were revived in 1971.  As we saw last time out, the '68 Box was different and had a Tipps From The Topps panel that took over the back of the box, with two very narrow baseball cards on each side panel.  Topps must have been reaacting to perceived competition in order to give the purchaser more bang for the buck: 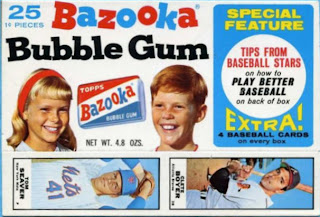 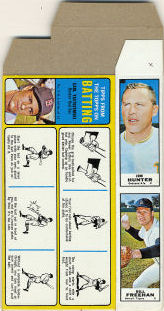 The flap show a 1967 production code (the last digit in the sequence signifies year): 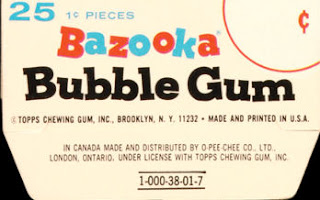 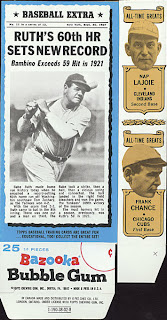 Those old timers look like the 1963 All Time Greats Bazooka inserts but I have not yet compared pictures to see if they were identical.  Baseball celebrated its (alleged) 100th birthday in 1969 so I guess everyone was waxing nostalgic.  That production code by the way indicates 1968. The set is always referred to as a 1969-70 issue and I am not sure if it was reissued in 1970 or just continued to be sold without any updating at all.  That is something I want to look at in conjunction with the two 1971 baseball sets and will be the focus next time.
Posted by toppcat at 9:32 AM