Every once in a while I am surprised by a new entry to what I call the Master Topps List.  I keep a record of each set issued by the company from 1948-80 and since about 1999 maybe every couple of years a new entry is made to the list (I have been keeping track since 1989 or thereabouts, in case you were wondering just how far back this obsession goes).  Faithful reader and sometime-troubadour Matt Glidden sent along a question the other day that led to a fresh entry in the database.

Tipps From The Topps is a well known Bazooka box back panel, or package design set but I had never seen one without a ballplayer's picture in the leftmost panel.  Here is how the Playing Shortstop panel looked on the back of a 1968 Bazooka box, as originally issued:

There are fifteen panels in the original set but the later set is described as having only twelve subjects.  I'm not sure of the set count for the non-photo issue nor which topics may have been pulled for the re-release so it's an open question as to its actual length and composition.  A booklet of the Tipps was also issued at some point: 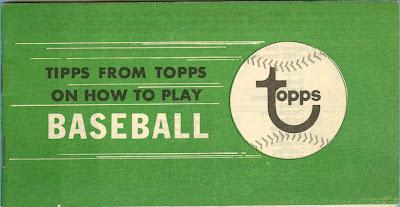 A promotional page in the back of the booklet infers the booklet may have been distributed by MacGregor Sporting Goods but that is unconfirmed.  MacGregor had a history of offering tips booklets of different sorts through ads in Boys Life magazine so I think this is a fairly solid lead as to the booklet's origin.  The interior pages of the booklet, which feature all 15 Tipps, are in black and white:

As for our photo-less Tipps panels, the year of issue would seem to be in the early 1970's; I would say 1970 or '71.  I'll get into it more next time but there is some reason to believe Topps scratched their scheduled Bazooka back panel set in 1970 (it would have been a return to the three card panels of yore) and there is also a photo-less football issue in 1971 called A Children's Guide To TV Football, probably issued as a result of Monday Night Football being a hit in the ratings:

The vagaries of the 1970 and '71 Bazooka baseball box backs will be looked at shortly, so stay tuned kids!
Posted by toppcat at 7:02 PM

Cool, glad this question spurred a new entry! Agreed that it looks like a re-released Bazooka box. The checklist count (12) matches that 1971 football set; perhaps it came out the following spring for baseball fans, say in 1972?