Hard To Pin Down

My thoughts were drifting to 1955 and 1956 this morning, specifically the '55 Double Headers set and its successor, the '56 Baseball Pins. I have written about both sets previously but for some reason it hit me today that these two sets were designed to pin Bowman flat on the mat.  Spend those pennies and nickels on Topps products and that was just a little less left for Bowman's, right? With 1955 seeing what is the first supplemental baseball set in the Double Headers, Topps went with pins the next year but stopped the set at 60 instead of the advertised 90.

Now Bowman had no counter to this move; they had no supplemental sets to offer, metamorphic, metal or otherwise.  Their only two real side issues were the1949 PCL set and the Black & White cards that rounded out 1953 when the Kodachrome stylings of that year got too expensive to justify.

So why did Topps withhold the last 30 pins?  I suspect it was because the battle was won and when they agreed to purchase Bowman in February of 1956 (a deal that would close on April 1 of that year) there was no longer any need to spend the money on a last series of 30 pins so they just stopped production.  Topps would occasionally do this for various reasons but in '56 I believe they were stretched on the cash flow front due to the purchase of their primary competitor and just decided to can the rest of the set.

As a bonus, when I was researching this post, I came across a scan of the box for the Pins (actually they were called Buttons) that I did not have for my previous post on the set.  Check out this bad boy: 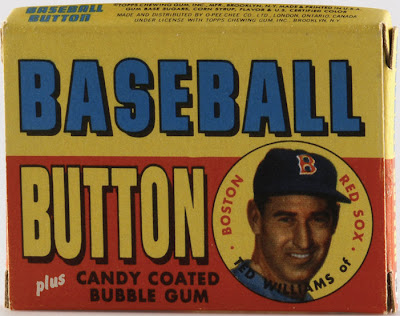 That candy coated gum almost certainly represents the death throes of of Block Busters gum, a product that was fizzling out at the time and which resembled Chiclets.  Once again Topps was able to take a failure and repurpose it.  I would not put it past them to have taken returns of Block Busters and taken the gum nuggets from those packages and inserted them into these.

The bottom is quite informative.  We learn that the set was definitely was to have 90 subjects. 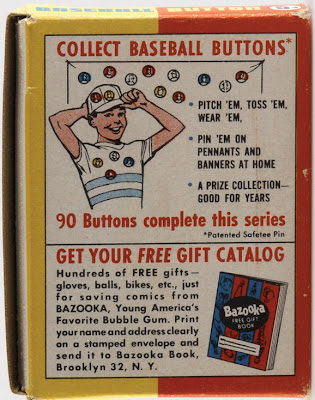 The Bazooka premium catalog offer is a nice bonus!  Personally, I consider the '56 Pins to be one of the best supplemental Topps sets ever; it's just too bad it never could get past 60.
Posted by toppcat at 5:47 PM

I love the simplicity of sending away for a Bazooka Book to "Brooklyn 32." The average age of today's collectors isn't the only thing that's changed.

You can date some things by the absence of the two digit identifier, although it's not foolproof as some packaging omits it. Larger cities started using the two digit postal zones 1943 and then the ZIP codes we all know and love became de regueur in 1963. 1983 brought ZIP + 4, 2003 gave us nothing except higher postage rates!

On a semi-related note, in the 1960's two blues scholars, trying to reach Bukka White, who had disappeared from the scene for almost 25 years, sent a letter simply addressed to "Bukka White (Old Blues Singer), c/o General Delivery, Abderdeen, Mississippi." Bukka White responded and ended up reviving his career.