Just a tidbit today kids, a morsel if you will.  I've been curious of late about the fadeout Tops made from the non-Bazooka gum scene in the 1950's.  At some point in the early 1950's they stopped commercial production of their long-running line of "changemaker" penny gum tabs.  This makes sense as Topps was evolving at the time from a company that sold gum to adults and candy to kids to one that was much more kid-oriented.  While they still produced a peppermint gum tab for use in U.S. military field rations and would do so at least through 1958, the focus had shifted to bubblegum and trading cards once they baby boomer began spending their pennies and nickels.

Topps did try to market a Chiclets style mint gum in the early 1950's (as did a number of other manufacturers) but caught caught on the wrong end of two lawsuits and had to change their packaging.  This old matchbook shows how their packaging originally looked, around 1951:

Another attempt was made from what I can tell and a redesigned package resulted:

That particular style of Topps logo was not one that lasted any great amount of time, nor was their time as as a seller of gum "nuggets, as the small pieces are referred to in the trade anything special.  They did however, manage to hang on long enough to market this type of gum in Argentina in 1970 or thereabouts: 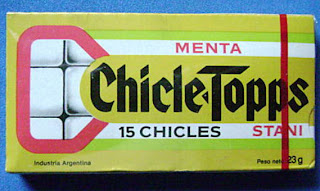 Topps would often sell products in South America that had run their course or been discontinued in the U.S.  Usually this involved trading cards but for at least one product, the gum is what was repurposed.
Posted by toppcat at 4:27 PM

Wow the Topps gum pack really looks like a rip-off of chicklets. Was that intentional?