A little while ago I managed to snag a black process proof of Jim Fregosi's 1970 Topps Baseball Stars Candy Lid on Ebay, despite a snipe war that cost me dearly.  The '70 lids are pretty difficult to find and may have suffered from lack of sales of the candy product.  I can't even find a good scan of the actual Fregosi lid but the black process proof is a little surprising.

Here is how the proof looks, it is composed of  two pieces of clear plastic:

A final, print ready proof would have consisted of six colors, so the process was somewhat painstaking. I was taken aback though when I separated the two pieces I received.  I would have though the banner with the name on it would be the topmost piece but it actually was the bottom one as the top layer was translucent to a certain degree: 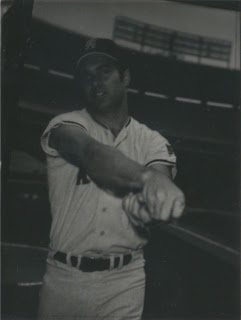 See how the banner and circle are gone!  They are printed on whiteboard and lie underneath: 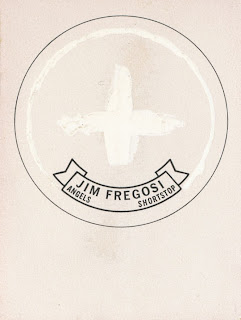 That x in the middle is odd, perhaps it was used to center the piece. The back of the board has seen some tougher times: 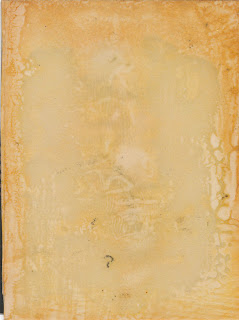 Given the amount of effort and expense that went into each set, I am amazed sometimes that Topps made a profit.  It must have really been felt on the bottom line though, when something like these lids did not sell like they had hoped.
Posted by toppcat at 6:51 PM