For some reason I have had the scan below for a long time but never got around to posting it here.  I have written extensively about Topps Gum, the Shorin's main bread-and-butter product before Bazooka became what it became.  Much of the success that came to Topps because of these humble penny tabs came because of their marketing savvy.  The counter top display for the "Changemakers" is one such example: 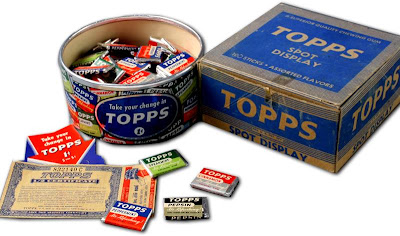 The spot display tub held 100 tabs of Topps Gum (originally only one flavor came per tub but that changed) and the retailer got a handy redemption certificate he or she could accumulate and put toward some nice housewares or clothing.  The tub above is made out of cardboard and is not all that sturdy.  An earlier version, which I do not have a scan of, had a foil outer layer and was probably changed over to cardboard during World War 2 as the military needed as much metal as possible for the war effort.

Topps sold the tubs to their jobbers or wholesalers, if you break the figures down, at around 38 to 40 cents per tub, if a full carton was bought.  The jobber probably retained about 35 cents per tub so the retailer made a whopping two bits for each full tub they sold.  Still, it was a phenomenally successful product and it helped hundreds of Mom and Pop stores keeps the lights on.
Posted by toppcat at 10:58 AM