Sy Berger, who was pretty much the public face and voice of Topps for a good half century or so, is on record in numerous sources as stating the caramel in the packs of 1951 Baseball Candy reacted somehow with the coating on the cards (presumably red and blue backs) and caused children to be sickened.  Take this quote from a 2001 USA Today article for instance:


Then have a look at Mint Condition, by Dave Jamieson, where Sy Berger states:

"You wouldn't dare put that taffy near your mouth....I won't mention the printer's name who printed the cards but we ended up suing him, and that '51 series was really a disaster."


Other than the fact that it was caramel and that the whole story is likely BS, ol' Sy is right on the money!


Now I do not blame Mr. Berger, who likely was reading from some PR flack's sheet for most of his professional career, for any of this.  He was after all, a good company man.  But here's the rub: I have done almost a year's worth of extensive digging into the early history of Topps and have read through pretty much anything there is to read about the firm in 1951 on Google Books, The New York Times website, any number of old newspaper archives and numerous books and periodicals and cannot find one contemporary account of any child being sickened by the caramel packaged with the 1951 baseball cards.  Zero. Zip. Nada.


In fact, if you look at this scan from an old auction showing how the caramel was packaged in the five cent packs, you can see the candy was segregated from the cards: 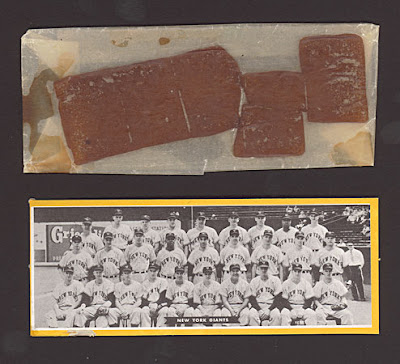 Now I do not know if the candy was individually wrapped in the penny Baseball Candy packs and I certainly could have missed a key reference somewhere but with no evidence from 1951 showing up I am really having doubts about this story.  Plus but that team card is from the first printing of that set so the caramel wrap was in the earlier packs.

What I think actually happened is that Bowman slapped Topps with an injunction and forced them to stop selling Baseball Candy in 1951.  I think the team cards that say 1950 on the obverse were a desperate attempt by Topps to stop the injunction by displaying an incorrect date and it failed (It has been known since at least 1960 that the undated team cards were issued first and then reissued with the 1950 date).  Further, I think that the 1952 dated box for Doubles packs means Topps felt they could market the cards in that year as the players involved had contracts that were in effect or the subject of the injunction and that once the 1951 season ended the right of Bowman to enforce their contracts for that year ended.  I have not been able to find the legal citations supporting this yet but there is later litigation between the companies that hints at it.

I am also starting to wonder about Sy's story concerning leftover 1952 high numbers being dumped into the Atlantic Ocean in 1960 while he acted as a Supercargo but doubt any evidence to the contrary exists.  With the Baseball Candy issues, there is definitely a chance of proving it wrong but I do not have a subscription to Lexis.
Posted by toppcat at 8:14 PM

Interesting thoughts on this one! Legal wrangling seems to rule the day in baseball and cards, regardless of era.

Dave - As a seven-year-old with no concern for my teeth in 1951, I must have eaten a number of those caramel bars, and lived to talk about it. My recollecction is that the bar was separated from the cards inside the wrapper only by a piece of waxpaper. This would pertain to the Redback panels packaged with Connie Mack All-Stars, as I never saw the other issues at that time. I think I would have noticed an odd flavor, such as kerosene, but being a kid, maybe it made the caramel seem tastier.