Back to 1949 today again kids-I want to take an introductory look at an obscure Topps product called Flip-o-vision. Clearly named after a newfangled machine called television, the Topps version was a flipbook of 30 thin "pages" that the purchaser had to bind together with a rubber band to flip through.  They were sold in an elongated five cent pack that held 10 three scene panels and some gum. 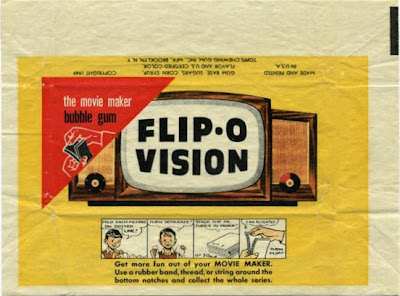 There was no corresponding penny pack as one would have held a mighty short movie.  Also, following what I presume to be slow sales of their five cent Magic Photo/Hocus Focus packs earlier in the year, Topps reverted to briefly selling different products in their penny and nickel packs when Flip-o-Vision was issued in the summer of '49; they would return to penny and nickel price points for the same product again in early 1950, probably after seeing that one and five cent versions of Bazooka did not dampen sales when marketed together.
I lied before, it's actually, it's really 29 scenes and a cover panel that make up each "movie", as this excerpt from Woody Gelman's ideas book shows with Dick Tracy giving us a look at a panel as well, courtesy of Heritage Auctions: 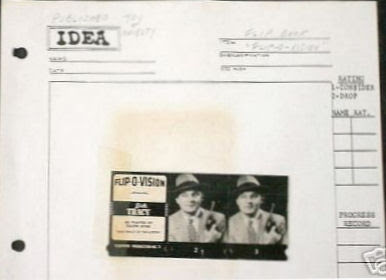 Here is another shot from from Heritage: 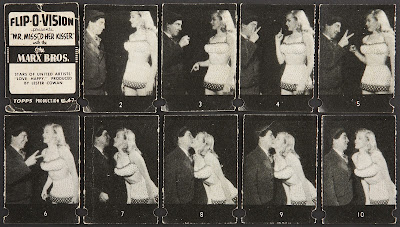 That's Chico Marx and Marilyn Monroe by the way.  That shot really gives you a good idea of how choppy the movie would be!  Here's a back shot of one scene, just so you can see what it looks like: 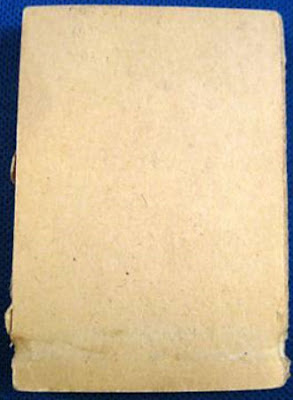 And here is a better look at a front, showing the old font used with Topps Gum in the "Topps Production" line: 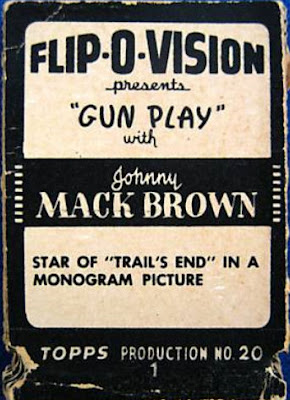 It says # 20 and a checklist of 49 subjects (all actors and actresses, not movie titles) was advertised on a wax paper insert that presumably was in each pack, making it the first Topps Checklist ever issued. Some on the original list are thought to have never been issued or pulled very early in the run.  The common wisdom is that they were pulled due to copyright issues or complaints by the actors depicted but no one really seems to know.  The current checklist is thought to number 51 according to Chris Watson in the Non-Sports Bible but Chris Benjamin has written in his Sport Americana Price Guide to the Non-Sports Cards that #60 is known, and that number is not shown as a known movie in the NSB so there could be at least 52 subjects out there.  It's possible of course that there are 60 of these little buggers out there but they are not widely collected and like so many of the pre-Hopalong Cassidy Topps sets, not a whole lot is known or written about them.

Topps had high hopes for the set, which was tied in to a promotion with some New York City movies houses but the it must have sold poorly as it was being liquidated as overstock by the spring of 1950.  However, there is some tantalizing, albeit tenuous evidence that these little flip books led to the 1951 and 1952 baseball sets.  That is a story for another day though and one that will have to keep for a while.  In the meantime, go here for an interesting read on all types of flipbooks.
Posted by toppcat at 7:33 PM

Hi de Ho,
I wanted to inform you that I've just published an article about the CAB CALLOWAY Flip-O-Vision with an animated GIF of the set. Of course, I've used some of your pictures and info and you're quoted in references.
I hope you'll enjoy :
http://thehidehoblog.zumablog.com/index.php?sujet_id=18409