This will be the first of two or three posts about the 1953-54 Topps World On Wheels set.  Issued hot on the heels of Wings and actually identified by the similar two syllable "Wheels" on the wrapper, WOW was a fabulously well illustrated set.

That;s one helluva an illustration, no? My concern tonight though, is not the cards, nor their stellar wrapper:

No, I am after bigger game, namely identifying the issue dates of this set.  Much like Wings, World On Wheels was a major hit and enjoyed high volume sales over almost a full year. Here, check out Wings, which were introduced a little after the 1952 baseball cards, was being sold into 1953 alongside the third series baseball pasteboards (indicating about May 1 on the calendar),  The item to the left of Wings is Clor-aid Gum, a Topps attempt at unseating American Chicle and their Clorets Gum, which would not end well for the boys from Brooklyn: 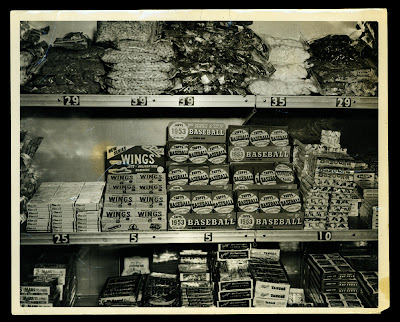 World On Wheels has some fascinating components,not the least of which are two, 10 card high number series that extended the set well into 1954 (oh, that's for another day).  The wrapper above shows a 1954 end date, which puts the cards being issued in two 80 card series in 1953 and a ten card "topper" once artwork on the 54's was available, probably late in the summer of 1953. The set has oodles of''53 models within the "regular" series, which ends at #160.  The highs though, give a peek at the 54's in the run from #161-170 and some 55's in an even higher run of ten up to #180. More on these phenomena shortly.
A lot of speculation as to the date of the set still takes place today, almost sixty years hence.  I can tell you that a contest insert issued in the pack has an expiration date of December 20, 1953.  Topps had long lead times on their pack inserts advertising contests and premiums back in the 50's, some stretching almost a year form the date of issue, although I would think the first series of WOW came out in the spring or early summer of 1953, once Wings had sold its last and had an expiry about six months in the future: 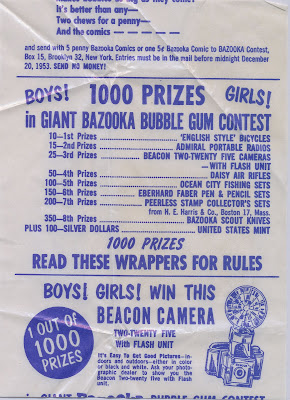 It would seem then, that WOW had a shelf life approaching 18 months-impressive!  I'll have more on this next time out.
Posted by toppcat at 12:37 AM

Just so you know, there is a wrapper variation with a 1955 date that is believed to have been issued for the high number series. I have a picture somewhere... I'll dig it up and send it along.