Every year or so it seems I run across an issue that is not exactly vintage but strikes a chord that seems Archives-worthy.  For over a decade now, Topps has issued Heritage sets that mimic the design of a classic and vintage Topps set but include current players.  The anniversary matchups are a year off (the first set was released in 2001 and used the 1952 Topps baseball design) but they are basically spanning a fifty year gap (much like your webmaster this year).

In 2010 a 1961 design was used for Heritage baseball; basic but fairly attractive and uncluttered except for the annoying logo at upper left (I despise them on TV as well): 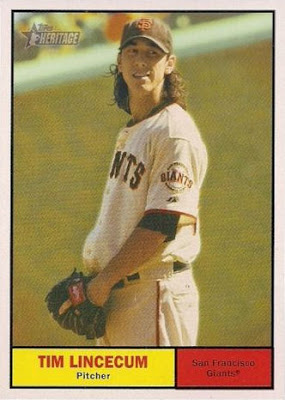 It's the back that got my attention as it is a replica of the 1961 Dice Game in-house test that is among the rarest of all Topps sets: 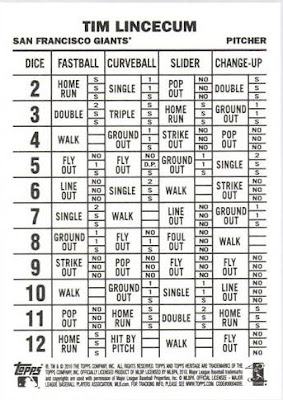 Compare that to an actual Dice Game Reverse: 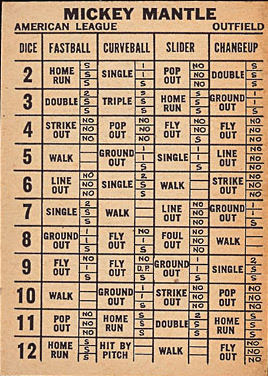 Pretty close, except for all the indicia on the newer card.  The take away is that this absolutely confirms the 1961 Dice Game cards were a Topps creation as they originals have no identifying marks on them. Retro is clearly in these days, as this 2011 Topps Lineage 3-D card of David Wright shows.  I've already blogged extensively on the 1968 3-D set so figured I would throw this on here as a bonus. 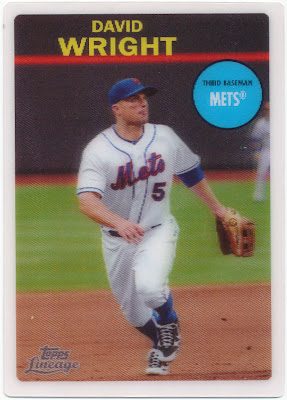 That card is not cut straight!  The 3-D effect is very "deep" (the player in the background completely disappears when you tilt the card one way and moves around a bit when you tilt it the other way) but I like the effect on the 68's a little more, even though it's not as technically advanced.

Now, when do we get some retro Punchouts?
Posted by toppcat at 5:27 PM

ironically enough, the last one i need for my set is the....you guessed it...Dice-K Dice Back! lol

Ohhhh how I HATE HATE HATE how they put the logos on heritage. If they HAVE to do it for some corporate reason, can't they make it at least a vintage looking logo and not make it semi transparent? They didn't do semi transparent logos in the 50's and 60's.

Hi, sorry for reviving an old thread, but I saw the picture of the 3-D card and was trying to explain to my daughter what the photo underneath the grooved plastic would look like. By any chance, do you have any that have unpeeled somewhat that you could photograph, so she could see it?

I'm not 100% certain but think there are two ways to achieve the effect.

1) While the photo underneath (i.e. printed on the cardboard) is essentially "normal" there is another one that is printed on the underside of the plastic ribbing and the interaction of the two when the card is tilted gives it the 3D effect.

2)I think there is also another way to achieve this effect by superimposing one picture over the other on the card.

Either way you need two images to make it work.

If you tear apart a 1970's Kellogg's 3D card, you would be able to tell as it was the same process used by Topps.