It's not an election year in most parts of the country but I am in a presidential mood today.  A while back I took a look at the 1949 Golden Coin issue that ended up being reused in any number of ways by Topps until 1965.  Friend o'the Archive Lonnie Cummins recently sent a long some box scans of the 1949 version that seem to support the notion the cards did not sell well when first issued.

Check this box out.  Not only is it in really nice shape but it adds a new layer of mystery to the set:

Yes, Topps has added a coin to the pack i order to move more product.  They must have done this quickly as the main tag line on the box indicates "another coin in every bubble gum pack" but the splash lozenge clearly states 2 coins are now being sold.  If you look closely at the lozenge, it appears to be stapled in place: 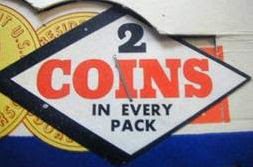 I would surmise that the packs look the same as when originally issued.  The additional coin does not seem to have mattered much as the set was being liquidated as overstock by early 1950.  I'd wager there are more mysteries lurking when it comes to this set. Any other Archivists out there have anything good?
Posted by toppcat at 2:45 PM