One of the reasons Topps became such a dominant company was their international marketing plan. The strategy was a smart one and is most often associated with their operations in Canada where they started pushing their gum products as early as 1947.  Another outpost was England, where they purchase an interest in A&BC in 1958 and of course there was Venezuela, where baseball cards, usually the first couple of US series, were sold with Spanish backs  printed especially for (and in) that country.  But their first specific Spanish language set was issued in 1952 and took direct aim at the Mexican market.

Wings was a highly successful, multi-series issue that followed the landmark 1952 Baseball cards in both size (Giant) and appeal (massive).  The series was marketed well into 1953 and consists of 200 brightly colored cards of various aircraft.  The Shorin's, used to doing business in Central and South America for many years while in the tobacco trade, turned to Mexico during World War 2 to import raw materials to continue manufacturing Topps Gum.  It seems likely their familiarity with the area led to a full release of all 200 Wings cards Spanish backs.

Here is one card, in all its defaced glory: 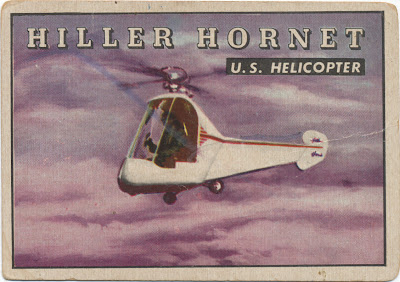 The front is identical to the US issue but the back is not, although the graphics are the same: 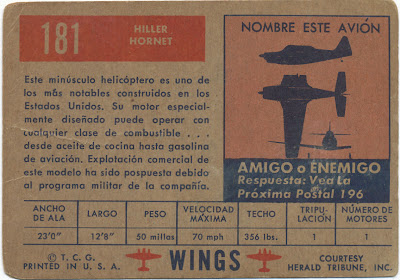 Here is a US back for comparison: 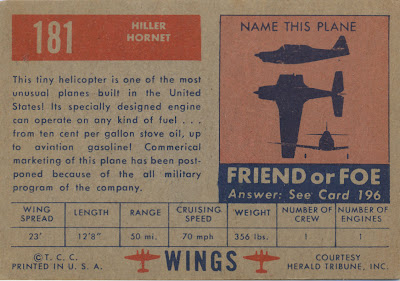 The indicia at the bottom and the number & title block wording remains in English but the rest of the card has been translated to Spanish.  The entire 200 card series was transformed this way, although at one point it was thought only the first 100 cards had been produced and the backs of the second series had only been proofed but that is clearly not the case.  You can find blank fronts of the last 100 cards though.

The set in Spanish is becoming easier to find of late and if so inclined, could be assembled with a little effort.  Their efforts south of the border would take a few years to find consistency but Topps was clearly thinking big in 1952.
Posted by toppcat at 9:16 AM

Thanks Chuck-I lost out on that lot (it's gone from the 'bay now) I think.