Well I snagged a real sweet test card off eBay just before Turkey Day.  I have a goal of collecting one card from every set Topps released at retail from 1948-80; this conveniently leaves off some of the real tough proof issues such as the 1966 Punch Boards but with some sets it's really hard to tell if they were released to the public. There are still some doozie's in there though.

One set that falls into this category (and others) is the 1968 Test Basketball release.  The cards are extremely rare but they are printed in black and white, which has always made me suspicious of their non-proofiness, for lack of a better term. 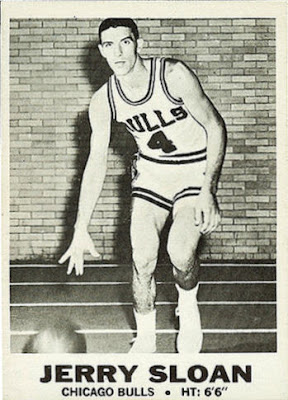 It looks like he's practicing in a high school gym-the NBA was not always the glamour league that it is now.  You might also note the card displays Default Topps Block Print, a hallmark of many mid 60's test and proof sets.  There are 22 cards in the set and the backs make up a puzzle of Wilt Chamberlain, looking very vertical:

I think the two bottom right corner cards are just black while the two above them just show a little knee.  The cards came in a paper envelope style of pack: 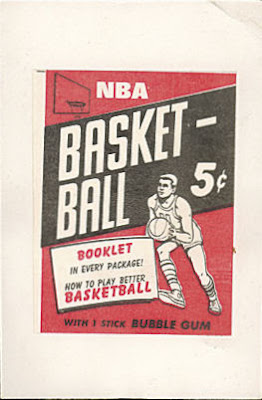 It looks like a typical Topps test pack sticker but the word is that it's on an envelope. The cards are rare, the insert would be rarer still; I have never seen one.  I have a theory on these cards (both test basketball and other black & white issues of the era) and this type of envelope wrapper and wll get into that next time out.
Posted by toppcat at 6:38 PM

Back in their early days, the Bulls practiced at a gym on the campus of Angel Guardian Orphanage in Chicago. My guess is that the Jerry Sloan picture was taken there.