This may or may not be the kickoff of a look at how Topps seeded their checklists in the 1960's and early 70's, in a manner I refer to as the Theory of Checklist Relativity.  Click that backlink if you haven't been here for long to get a little more flavor if you like; there are three different ways this was done over the years (and wich I will not get into today).  The gist is that Topps would print the next series checklist with the prior series of cards, thereby previewing the next series.  This preview generally appeared at a ratio of 1:2 compared with the other, earlier checklist card on the sheet, which was almost always double or even triple printed.

The same checklist (well,almost - it was never a perfect replica) would also appear in its rightful place on the next series sheet, double printed and the next series checklist would then mingle in.  And so on and so on until the last series of the year.  Primarily associated with the annual baseball cards, this method was used at various times with other sports as well.  It also produced the "inevitable and much dreaded checklist card" in great quantities, to quote the Great American Flipping Trading and Bubble Gum Card Book.

Normally the checklists printed with two series would look alike, except for the occasional typo.  In 1968 though, Topps tinkered with the design of their baseball  cards after the first series was released, thereby creating two distinctly different 2nd Series checklist cards.  The first 109 cards in the set were part of series 1 (yes, the series should total 110 using the "Rule of 11", hold that thought) and had what can only be described as a coarser grain to the burlap looking substrate.  For reasons that must have been aesthetic (the first series cards are just ghastly looking) or print related (browns always seemed to cause trouble for Topps, see the 1962 baseball  cards for a prime example) , Topps switched to a finer grained burlap going forward, starting with the 2nd series. 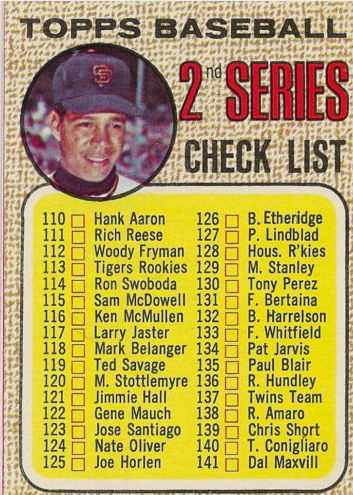 Now take a look at the same card but from the second press sheet (it is #107 if you are curious): 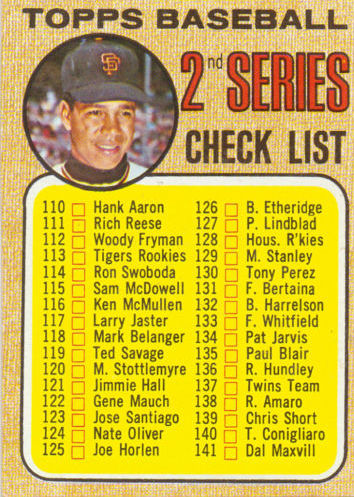 The Wheatena look is gone!  The missing 110th card is explained by the 1st series Checklist appearing not only in its own slot in a row with 10 other cards that world normally repeat at least once over the 264 full sheet but also in another slot unrelated to the other row.  Why Topps felt the need to do things this way is a mystery.
Posted by toppcat at 12:39 PM

The missing 110th card is explained by the 1st series Checklist appearing not only in its own slot in a row with 10 other cards that world normally repeat at least once over the 264 full sheet but also in another slot unrelated to the other row.

While it's true that Topps printed checklists #2 - #7 in the previous series as well as in the current series, is there proof that the series #1 checklist was double printed?

(I'm in the minority that actually like the 1968 cards)

maybe the slot for the DP of the 1st checklist was the same slot where they would insert the 3rd series checklist on the 2nd series sheets? i don't know why this stuff fascinates me, but i am a sucker for the sheet layout information.

The "Rule of 11" is that Topps cards in Standard Size (1957 onward) were printed in twelve rows of 11 and most series in all but a few test issues (and excluding the 1967-72 Checklist shenanigans) are divisible by 11, as are the Double Prints and usually such things as obverse color variations. 12x11=132 uncut sheet.