In The Jungle, The Mighty Jungle

Superman has been a trading card character almost as long as he has been a comic book character.  The tale of his origin, both the actual, artistic birth of the character and the fictional narrative centering on Krypton are essentially folk tales by now. The original classic set depicting the Man of Steel was made by Gum, Inc. (Bowman's predecessor) in 1940-41 is considered one of the top non-sports sets in the hobby, with some devilishly difficult high numbers and an active collector base conspiring to price it out of the hands of many collectors by propelling the 72 card set into five figures.  It is NOT, however, the only high priced Superman set out there, thanks to two Topps test issues.

The first of these, the black and white Superman set issued by Topps in 1965 and/or 1966 was discussed here a while ago (click here and then scroll down a little) and exists in a test version that is quite tough and a regular issue with two variant reverses that is quite easy.  Then there's Superman in the Jungle, which was almost an unknown set for the first quarter century of its life.  While values have fallen of late, it's still a pricey set to put together and many of the extant cards are actually blank backed proofs.

Superman in the Jungle was tested by Topps around 1968 in the U.S. and clearly did not resonate with the kids who saw it.  Consisting of 66 cards with well rendered, color drawings and an insert puzzle piece set numbering 16, it is a hobby rarity today.  The display box is a genius work of Norm Saunders: 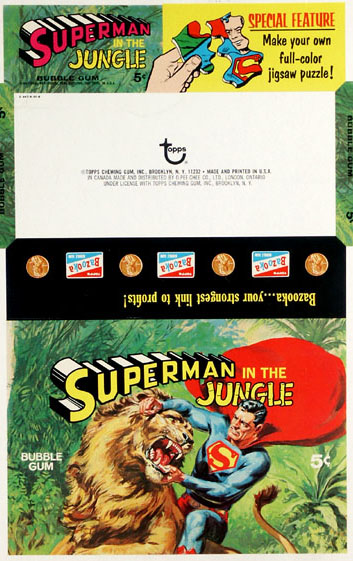 The wrapper is also well done, although this is actually a photo that is offered on eBay: 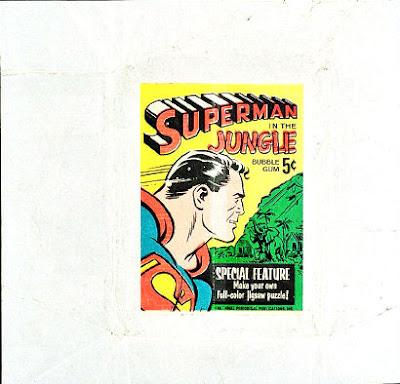 I am hesitant to call that a Saunders work and his website does not mention he drew it.   He did, however, do the inks for the cards.  Here is a proof that shows the artwork: 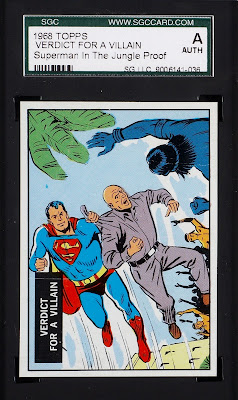 Colorful but fairly simplistic art may have doomed the issue in the States.  Here are a few more, with characteristic off center backs and like the above proof and many other images on this page, from the Legendary Auctions archive: 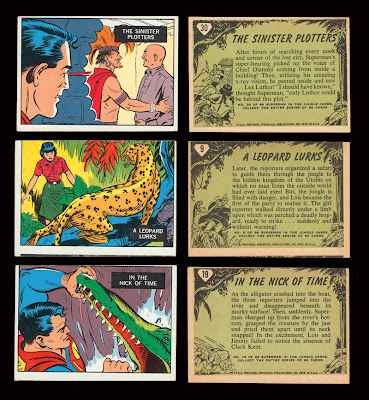 The 16 puzzles are not your garden variety Topps insert and are die cut.  They are taken from the box cover and here is a real nice proof showing them all: 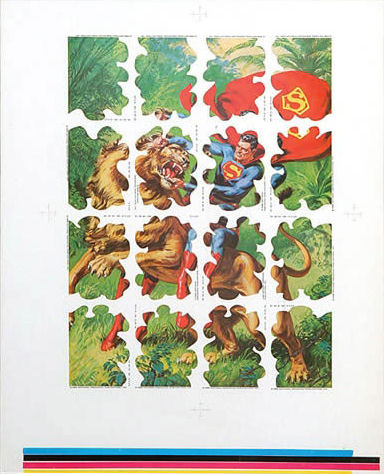 Having spent the money on art and testing, Topps was certainly in a bit of a hole.  The solution?  License the set to their partially-owned British subsidiary A&BC.

The A&BC version of the set is a little smaller (about a 1/4" each way) than the U.S. standard sized cards, as was usually the case in the UK but replicated the set otherwise.  The English wrapper is adapted from the US box art and is nice, colorful but a bit crude: 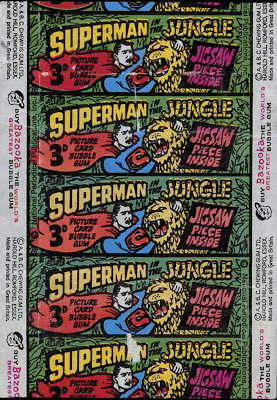 Here is an A&BC front and back: 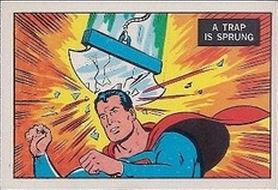 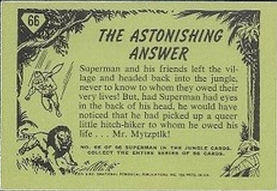 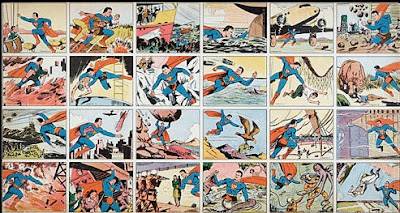