Khan You See Me?

New network TV shows in 1967 had a distinct international flair.  Tarzan, Daktari, even a show called Cowboy in Africa filled the airwaves.  But the farthest flung locale on the boob tube in '67 was India, with Jay North (Dennis the Menace) playing a character named Terry Bowen searching for his father, with his faithful companion Raji (Sajid Khan) alongside in show dubbed Maya.  Taking after the movie of the same name from 1966, the presumably dyspeptic duo traveled by elephant (which had the handle of Maya, get it?) through exotic locales that were shot on location.

Sadly such lush scenery could not sustain the show and it was cancelled after 18 episodes, failing to compete against The Dating Game/Newlywed Game juggernaut and The Jackie Gleason Show in the 7:30-8:30slot on Saturday nights, demonstrating that kids were still outside playing before Daylight Saving Time kicked in, while their parents watched more adult fare.  Really, that is a bizarre lineup for a kids show to fail against!

High hopes at NBC had led to optimism at Topps and a card set was released in conjunction with the debut of the show. The end result is that Topps ended up dumping excess inventory on the secondary market and Maya ended up being about as common a set as can be from the 60's. A seeming never ending supply of vending boxes has permeated the hobby and as a result the 55 card set is quite cheap today and $15 would be paying too much for a NM set.

The cards are s-o-o-o-o-o-o pedestrian: 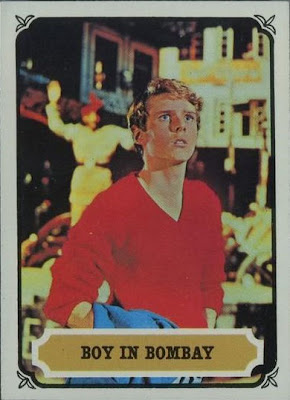 The reverse shows why the set is sometimes called Mysteries of India: 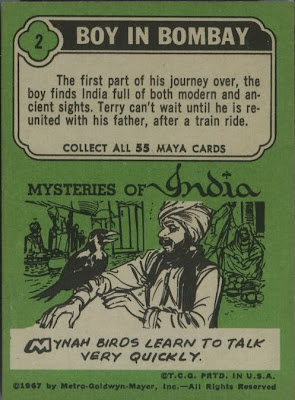 but there is a bit of a wrinkle.  While vending boxes by the hundreds were unleashed, wax packs ended up being very short lived. The wrapper is quite eye-catching: 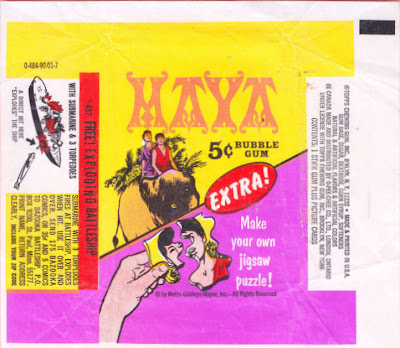 The puzzle is the sand in the Vaseline. Shaped like the pieces from Superman in the Jungle's puzzle, I am reasonably certain that set's 16 pieces have the same shapes as Maya's.  Here is a piece of the puzzle, Maya-wise: 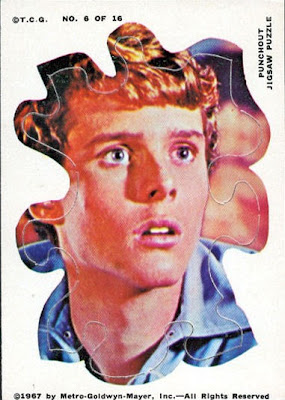 Compare that to Supe's visage a year or so later:

It's blurry but it's a match!  Supe's just as ragged (there would be color left on the remainder piece after the Maya puzzle was punched)  asTopps recycled the puzzle piece shapes after Maya tanked. Both these sets sold poorly but Superman in the Jungle only had a limited US release and the cards are hard to find today, let alone the puzzle pieces.  Maya puzzle pieces can sell individually for as much as the card set so they are tough as well.

Jay North ended up joining the U.S. Navy and was honorably discharged in 1979.  His mother invested his earnings from Dennis the Menace and even though his acting career petered out in the mid 70's, he did not suffer from the financial problems most child stars went through.  In fact, he works with an advocacy group that reaches out to former "acting kids" who have trouble adapting to real life.
Posted by toppcat at 12:53 AM