On Leather Steeds They Ride

The Four Horsemen of the Apocalypse: Conquest, War, Famine and Death.  The Four Horsemen of Notre Dame: Stuhldreher, Miller, Crowley, Layden.  The former a harbinger of the end of the world, the latter the Notre Dame backfield from 1922-24.  Oh, and the centerpiece of the 1955 Topps All American Football set.

Unable to sign NFL players due to Bowman's exclusive contracts, Topps turned to the college ranks for the third time in seven years to compete with a 100 card set. A card of the Four Horsemen of Notre Dame (#68) anchors the set but there are numerous big name players within. The set is a classic, possibly the most collected vintage football set in the hobby.  A fairly recent find of unopened cello boxes has driven many high quality cards into the marketplace and brought down prices but does not seem to have brought any clarity to a major feature of this set: 34 allegedly short printed cards.

All American was printed on 110 card half/220 card full sheets, 11 rows of 10 cards per half. Or, depending upon orientation, 10 rows of 11 cards.  With some rare exceptions (1952 Baseball high numbers), Topps would muck around with short prints on a row-by-row basis for their Giant Size cards.  That would mean a 110 card sheet as was used in 1955 should have a total number of short prints divisible by either 10 (portrait) or 11 (landscape). 34 does not work in this scenario but an examination of a partial uncut sheet reveals a haphazard arrangement.

This fifty card partial appeared in a Legendary Auction awhile back; another partial is known with the same configuration and subsections of it have also been sighted: 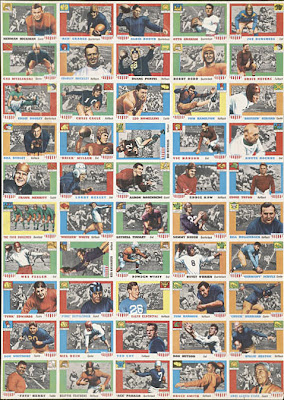 The back is intact: 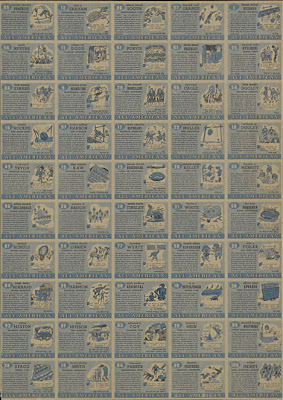 I plotted all the numbers onto a spreadsheet and here is what I came up with:

The lack of a pattern across full rows or columns makes me wonder if the SP's are properly identified.  And there are 31 of the 34 on less than half the sheet, which does not make sense. Anything is possible, especially since Topps was stuffing over 20 cards into some cello packs in their final beat down of Bowman but I would have expected three rows of cards to show up with SP's occupying each slot.  Another problem is that there would have to be some overprinted cards if 34 are short prints.   While I cannot find any listings for overprints, I have to think they exist.   If anything, I would have expected a run that hinted at either 20 overprints and no short prints but if you throw over 20% of the set into one pack, I guess you have to throttle things a bit. Tinsley and White had swapped backs in the first run, in case you were wondering why I highlighted them.

Did Topps mix up their short prints in a random, yet biased pattern?  Is the conventional hobby wisdom on the SP's flawed?  I am not sure what the answer is yet.
Posted by toppcat at 7:55 AM

Email ThisBlogThis!Share to TwitterShare to FacebookShare to Pinterest
Labels: 1955 Topps All American Football

The ten 55 AA wrong backs authenticated by PSA (as opposed to the two error backs) indicate that the printing of the back of the cards shifted one place to the left. For example, the Stagg front has the Smith back, and the Nevers front has the Dodd back. Interestingly, the Henry front (on the far left side of the 50 card uncut sheet) has the Stagg back (from the far right side of the 50 card sheet). This might suggest that the printing sheet was 5 cards wide in one direction, as the uncut sheet shows. It seems to add to the credibility of your premise that the conventional wisdom on the number of single print cards in the 55 AA set does not seem to add up. Have you considered posting this info on the PSA website under the 1955 All American message board thread to encourage others to wade in on this issue?

Interesting-I think it suggests a DP column (or row, depending upon orientation)and the strip of ten got moved up one notch when the backs were printed. Based on a known 1955 baseball sheet of 110, mistakes in groupings of ten would be expected as the DP's are in two identical columns of on that sheet (although there is a twist; some players appear out of sequence elsewhere on that sheet).