In 1955 Topps released a metamorphic set of cards in penny packs. Doubleheaders were designed to be folded thereby giving the purchaser, at least in theory, two different cards for the price of one.

As you can see, by folding the top of the back down a second, smaller picture was formed. 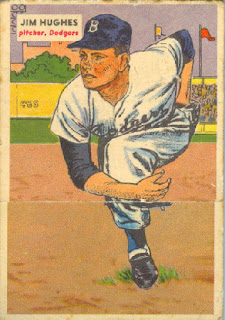 Unfortunately, the cards are prone to miscuts and the illusion is disupted unless a perfect cut was made at the factory. The bottom of the Spooner/Hughes back shows a sliver of another card and it is not a seamless fit.

The pictures, which are somewhat crude by Topps' standards, are taken from the small inset photos on the regular issue 1955 baseball cards (or was it the other way around?). There are 132 players (66 total cards) depicted and a quick spot check of the Standard Catalog shows they used designs from most of the the first 148 cards in the regular issue. Here are a couple examples: 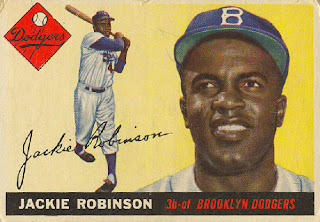 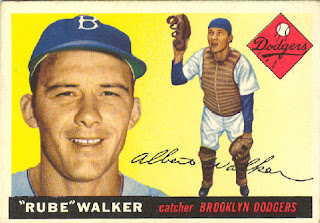 I have no idea what Rube is looking at. Come to think of it, Lou Limmer is going to break his nose fielding balls this way: 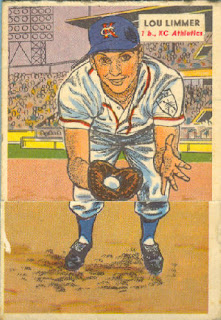 Even the folded image conformed to a smaller inset picture: 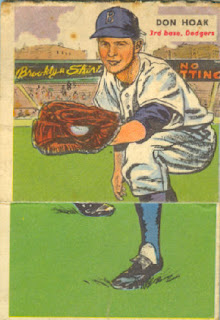 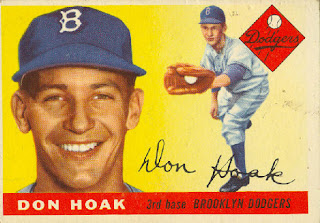 That's not the only other surprise this set conceals. The fronts of the cards have backgrounds that form a series of ballpark panoramas, as this uncut strip shows (probably from the same auction as the box and packs above):

It looks like an idealized Yankee Stadium, doesn't it? Ebbets Field and Polo Grounds backdrops were used as well. The October 1984 issue of Baseball Cards Magazine had a full color spread showing all 66 fronts and some scenes span eleven cards! A couple also seem to go from day to night. If I can stitch together a scan, I'll post some more panoramic examples down the road.

Some unopened packs are still floating around. I cannot recall which auction this scan came from but I'm impressed a box has survived through the years. 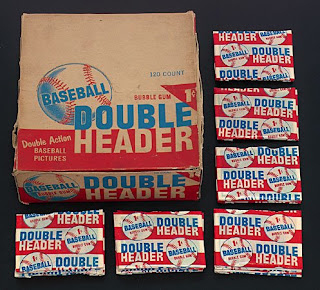 Doubleheaders harkened back to a set called Mecca Double Folders, issued in 1911, that used the same principle. This link will give you a good overview of that set. Doubleheaders were really the first supplemental issue of Topps baseball cards to hit the market as they experimented with different ways to expand their business. After the 1956 pins they would not mess around with such extra sets until they issued Baseball Tattoos in 1960.
Posted by toppcat at 10:26 AM

Great post! I was always intrigued by these and wondered how well they worked when folded. And I had no idea that there were full panoramic scenes unfolding across many cards, that is so cool.