Over the years, Topps would obtain licenses to produce various card sets featuring photos from third party sources. In the 60's and 70's, these were primarily related to TV shows. Since TV viewers are a fickle audience, some of these sets would only make it to the proof or test stage. In addition, they would sometimes not follow the Topps "rule of 11" whereby standard sized cards would be issued in sets or series whose total number was divisible by 11 (the number of cards in each row on a production sheet). For TV or movie-themed sets this was likely due to only a certain number of images being provided by the production company involved.

In 1973 Topps produced a very rare set that contained cards from two popular TV shows: Emergency! (one of my favorite shows as a pre-teen) and Adam-12. Single card images are hard to come by and I have only been able to swipe a handful of scans. Here is an Adam-12 front and an Emergency! reverse (the latter from the Topps Vault, a slick without a printed front). 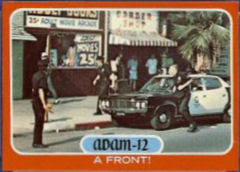 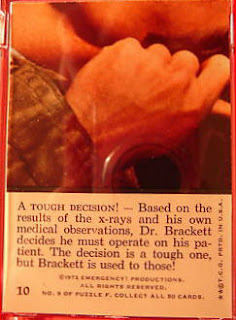 As you can see, there was a puzzle (six actually) back but not all cards had this type of reverse.

There are 50 cards in the set but instead of 25 from each show, there are 27 from Emergency! and 23 from Adam-12. This break from the "rule of 11" is not the only anomaly though. First off, it is highly unusual for Topps to feature two shows in one set. I can only think of 1962's Casey & Kildare as doing so and those two shows do not seem to have shared the same production company or principals, whereas as Jack Webb was involved with the Adam-12 and Emergency! shows, explaining their hybrid presentation.

Fortunately for us, Topps Vault auctioned an uncut sheet featuring all 50 cards a while back. 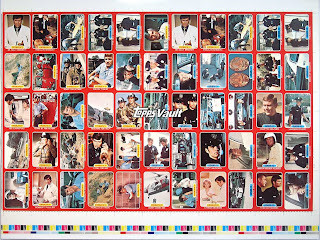 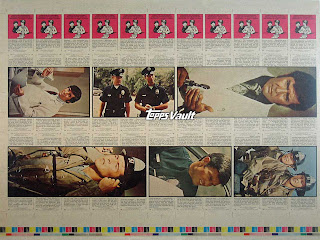 All things considered, this is one of the nicest proof or production sheets I have ever seen. If you blow the scans up you will see there are five double printed cards in the top row. In fact, the reverse shows the entire top row to be different than cards with puzzle backs in the four rows below it. It's hard to read but those reverses from the top row have simple graphics explaining the puzzles while also offering some text about the show in question.

The puzzle backs are also intriguing; if you match up the front and back of the sheet, some Adam-12 cards have a character from Emergency! on the back. More anomalies! This leads me to believe this sheet (and maybe the entire set) was printed for a final pitch to the production company and was ultimately rejected. John Neuner's Wrapper Checklist book does not show a wrapper for this set and given how hard it is to find the cards, I suspect they never made it to the test stage. The ratio of cards with one printed side on slick stock vs full cards also supports the proof only theory but I would not be surprised to see a proof wrapper or box pop up someday.
Posted by toppcat at 8:02 AM

Email ThisBlogThis!Share to TwitterShare to FacebookShare to Pinterest
Labels: 1973 Topps Emergency and Adam-12