Topps had a bit of a last gasp with their baseball test issues in 1973-74 and one of the best ones is a set of twelve baseball player puzzles issued in 1974. Since I am having some scanner issues (again) I thought today would be a good day to show some scans I stole off of Ebay over the years featuring this set.

While they are described as coming in both 25 cent and 29 cent packs (really an envelope), the latter is the only one I can recall seeing. If anyone has a scan of the 25 cent variety, send it along and I'll post it. 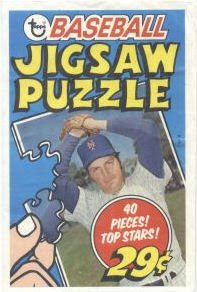 These have a glued flap on the back, so when you find an envelope that has been opened, it will be torn to some degree.

They came in a plain white box, not uncommon for test issues of this era and I presume each held a half-dozen: 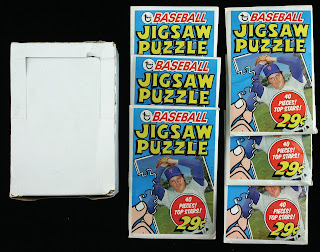 Topps may have been testing price points as well as the puzzles. This will be a Tom Terrific themed post, as the "wrapper" is different than his actual puzzle and therefore worth showing (OK, he was my favorite player as a kid): 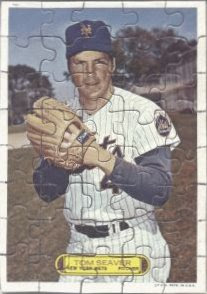 These are pretty hefty at 4 3/4" x 7 1/2" and they have some thickness too. In case you are wondering (and I know you are) each puzzle has 40 pieces and each puzzle has the same die cuts. These are among the easier Topps test issues to locate (although that is a relative statement) and one seems to show up as much as another. It is also fairly common to find the wrapper with the puzzle.

You can see all twelve puzzles in proof form on this killer pair (hard to see but it's six puzzles per side: 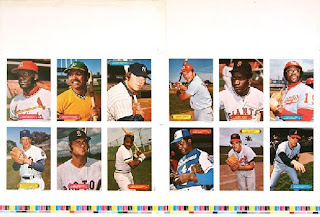 I bid on but lost the above proofs. I think they would make a fabulous display piece!
Posted by toppcat at 4:12 PM

Great picture of the proof sheet. This is one of my favorite Topps Test issues, so its nice to see all 12 images together on the same sheet.

I've been casually working on this set for years...I've got the Seaver, Jackson, and Aaron so far. One interesting fact about this set is that the Nolan Ryan puzzle is always found miscut. Don't know why, but I've never seen a properly centered one.

These are often found with poor cuts and centering an endemic problem with Topps limited production runs. I suspect cost considerations resulted in less that stellar quality control on some of their smaller sets.