After a couple of tries with tall boy cards in 1965 in their Hockey (the '64-65 cards were most likely issued in January of 1965) and Football lines, Topps finally found a sport worthy of the format in 1969. After an 11 year hiatus, interrupted only by a rare test issue in 1968, Topps issued a 99 card set of basketball cards in 1969.

Before we get to that, here is a peek at the 1968 test cards, of which only 22 players were printed. It is believed less than a dozen sets of these exist. 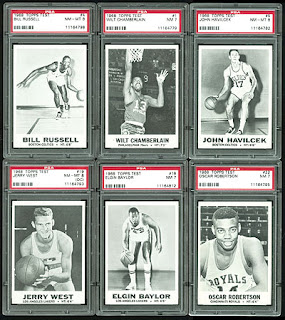 The backs of the test cards yielded a pretty nice action shot of Wilt Chamberlain, which you can see was taken from the front of his card. Topps was still digging the B&W in '68!

I have seen reference to an insert for this set as well, which allegedly consists of a booklet with playing tips. I will have more on the '68 set at some point down the road but the design clearly was amped up for the 69's.

Buoyed by the Milwaukee Bucks signing of New York City high school phenom and UCLA superstar Lew Alcindor, whose services were also sought after by the ABA's New Jersey Nets and the Harlem Globetrotters, Topps issued a 99 card set of NBA players forty years ago that measured a healthy 2 1/2" x 4 3/4". Lew had not yet played a pro game but appeared in the '69 set: 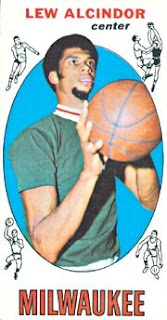 Lew is but one of many rookie cards issued in 1969 and the set is considered to be a classic.

For some reason, the Norm Saunders website has some box graphics for this set, perhaps he worked on the design.

The wrapper was not as action packed but nice enough, despite the palming violation: 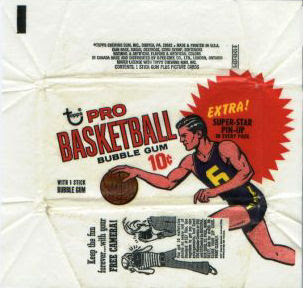 This uncut sheet scan was on my hard drive but I have no idea where it came from, nor why I cannot make the font any bigger: 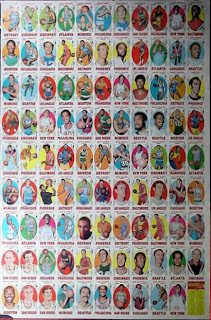 You can see the checklist card in the lower right corner. It is a very tough card to find centered and its position on the sheet is the most likely reason for this. I suspect a complementary sheet was arrayed to the left of this one on the master 198 card uncut sheet (check out the left border).

The tall boy concept also carried over to the year's inserts, a set of posters that resembled rulers and were almost 10" high. There were going to be 24 posters but Bill Russell retired and his ruler (#5) was pulled.

To spice things up, there may have been a wood grained series of proof cards produced in '69, almost certainly never released in packs. I have never seen visual evidence though.

Topps would continue the tall boy basketball cards the following year and expand their offering to include a second series.
Posted by toppcat at 7:17 AM

That black Basketball box was definitely painted by Saunders - check out the new book on him if you get a chance:

I am thinking that Topps may have had a similar issue with the 69-70 and 70-71 basketball cards as they had with the 1970s-early 80s football cards regarding showing team names/logos. With the football cards, they did not have the rights to show helmet logos for those years and so they were airbrushed out. On the two basketball sets, it appears the issue was team names, and this appears to have been addressed in several ways. The card captions included only city names (Detroit, Los Angeles, Philadelphia, etc) and not team nicknames (Pistons, Lakers, 76ers). The pictures of the players seemed to be handled in one of two ways. Some teams had their players wear their jerseys backwards (Lakers and Knicks, maybe others). Other teams had their players wear generic/blank t-shirts, jerseys, and shorts. I think at least some SF Warriors had their last names in block letters on the front of the practice jerseys.