One of the biggest hobby finds in recent memory was that of some shoeboxes full of little plastic busts of baseball players that Topps produced in 1968. For some odd reason these busts are called Plaks, although in prior years Topps reserved use of that term for thick, oversized cards.

The busts came three to a sprue in a really cool looking wrapper for a dime, which leads me to believe the test was not just of the product but also the price point, as ten cents was a hefty price to pay in '68. The Plaks might have made it into regular production as there are fully printed wrappers and the not the generic white test wrappers with stickers, although this is possibly because of the large size of the pack: 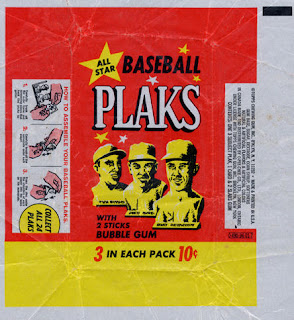 (from the collection of Bob Fisk)

and I have seen a couple of unopened packs to boot:

The production box is also nice: 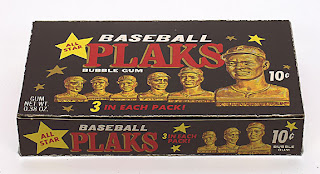 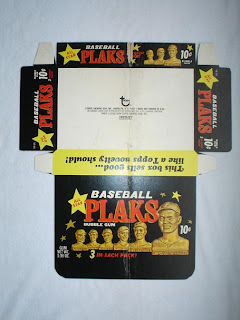 Mile High Card Company (the name pertains to their location, not their flying habits) was able to purchase this collection and the story is a fascinating one in that it reveals Topps employees could take home failed products and the like, no doubt explaining both the great rarity and latter day availability of many test issues. The Plaks were found in Scranton, PA and were near the Topps plant in Duryea.

One of the revelations from the Mile High find was that five players thought to exist were not produced. These are identified after the visual checklists below. (UPDATE 3/31/20: a single Mays has been found)

Some Plaks came on more than one sprue and there is a variant of the Mantle bust. Here are some examples, taken from Mile High's site. The full set of 19 plus Mantle variant is shown here: 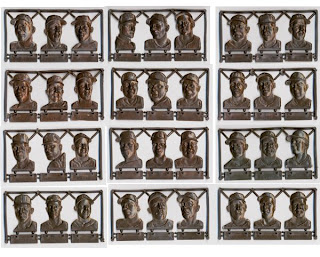 The Mantle "big nose" variation, on a sprue, rightmost: 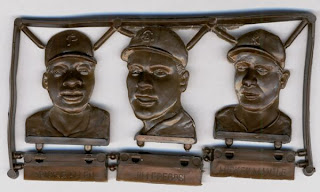 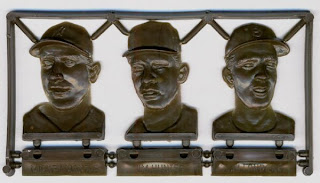 Here is a single Plak (happily mine now), which shows how they had to be assembled by the purchaser: 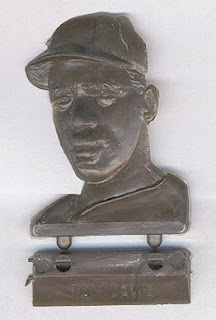 My favorite part of this set though, is the two checklists. These are about 4 inches tall and printed on cardboard. There is one for each league. I picked up this AL checklist at the 2004 National: 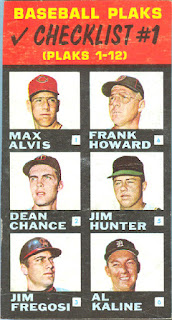 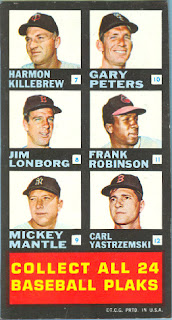 You can see there is a slight curl to the checklist card as they were produced in strips that were inexpertly cut prior to pack insertion.

The NL checklists below are from two different Ebay auctions awhile back. I still need one of these but they are hard to find (none were in the Mile High cache I gather) and expensive: 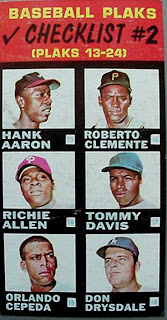 The five players you will not find are:

These five have also been missing from previous sales and cannot be found in even the most advanced collections.

Additionally, Rose appears to be short "printed", appearing on a single sprue and Davis, Hunter, Killebrew, Lonborg and Wynn appear on three different sprues. All the other known players appear on two sprues. Mile High mentions on their website they think the five triply produced plaks replaced the five missing ones which is plausible. Now that these have left the marketplace and been added to waiting collections it may be some time before any substantial number of them reappear for sale or in future auctions.
Posted by toppcat at 8:10 AM